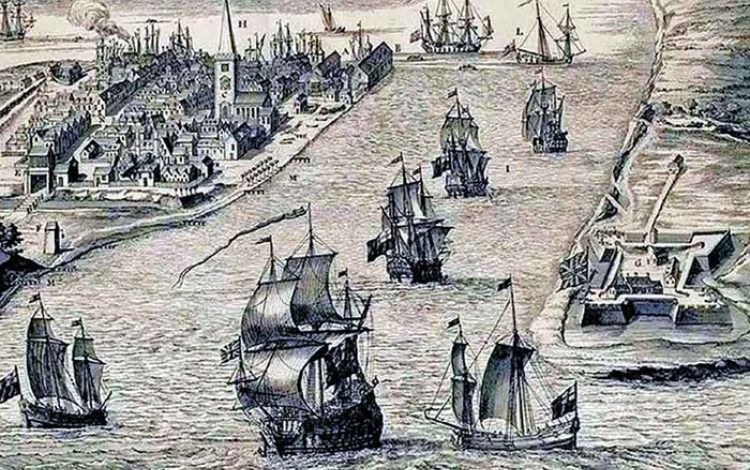 The Mayflower landed in America 400 years ago today. But the ship – and her captain – hailed from Harwich

The Mayflower landed in America 400 years ago today. But the ship – and her captain – hailed from Harwich

Everyone knows the story of the Pilgrim Fathers and their exodus to Cape Cod, Massachusetts, 400 years ago, in autumn 1620. The ship that took them there, the Mayflower, is renowned throughout the world.

But how much do you know about the ship itself, or the man who captained her on that epic voyage? The answer lies in Harwich, Essex, home of the Mayflower and her master and commander, Christopher Jones.

Christopher Jones’s historic home is just behind the quayside. Until recently, it was an unassuming private residence but, to mark the 400th anniversary of his momentous journey, it’s been converted into a quaint museum (there are plans for another Mayflower museum in Harwich, too). There isn’t much to see inside (not yet) but it’s intensely atmospheric. The structure of the house has hardly changed in 400 years; nor has the narrow street outside.

Across the road is the Alma Inn, a cosy pub today, but, in Jones’s day, the home of a wealthy ship owner, Thomas Twitt. In 1593, Jones married Twitt’s daughter, Sara. Sara died childless in 1603, whereupon Jones married Josian Gray, the widow of a prosperous mariner who lived in Church Street, around the corner. Clearly both marriages (at the local church, St Nicholas’s) did his seafaring career no harm at all. He built a ship called Josian (named after his second wife) and, by 1609, he owned the Mayflower - he may even have had a hand in building her. The ship was definitely built in Harwich; it’s not clear exactly when it was built but it wasn’t long before 1609. One of the most famous ships of all time was, in fact, a rather ordinary vessel.

Jones sailed to Bordeaux with fine cloth and brought fine wine back to Blighty. He criss-crossed the North Sea, trading with the Norwegians, and, in 1620, he was hired to export a cargo of pious Puritans to the New World. He returned to England in 1621, resumed his European trading expeditions, and died in 1622. In 1624, the Mayflower was broken up for scrap in London – the ship didn’t become a totem of American history for a century.

Harwich’s contribution to the foundation of the United States might be but a footnote in an obscure history book, were it not for the heroic efforts of the Harwich Society. Formed in 1969 to save the Redoubt Fort (built in 1808 to guard Harwich against Napoleon), this valiant band of volunteers has fought tirelessly to preserve all sorts of local landmarks, including the 17th-century Treadwheel Crane and the 19th-century Ha’Penny Pier.

The society’s vice-chairman, David Whittle, took me on a tour of the town he loves. What David doesn’t know about Harwich probably isn’t worth knowing, and his fierce affection for his hometown makes him an engaging guide. He was born and raised here. He can trace his local ancestors back to 1600, 20 years before the Mayflower was built.

I went with Madeline Smith, actress, Bond girl (with Roger Moore in Live and Let Die) and Oldiecontributor. Her connection is a bit more oblique - her great-great grandfather owned the Hanover Dining Rooms (now the Hanover pub) and she can trace her ancestors back to Christopher Jones’s second wife - but she loves the place as much as David, and her enthusiasm is infectious.

We started our tour in the 17th-century Guildhall, a handsome, Grade I-listed building, which, like a lot of old buildings in Harwich, used to be an inn. The council chamber is very grand, decorated with portraits of well-fed worthies (including Samuel Pepys, another naval man, who served as the town’s MP). The highlight is the 18th-century jail, whose wood-panelled walls are adorned with elaborate etchings made by inmates. There’s an early hot air balloon, a hanged man on a gallows and a whole fleet of sailing ships, one bearing the Stars and Stripes, dated 1777. Our next stop was the old lifeboat house, now a lifeboat museum. Next door is the Electric Palace Cinema, built in 1911, one of the oldest cinemas in the country.

The only natural harbour between the Thames and the Humber, Harwich has played a leading role in British naval history for well over a thousand years. Alfred the Great repelled the Vikings here in 885 AD (the spot where he did it is still called Bloody Point) and Plantagenet armies sailed to France from here in the Hundred Years War. Its proximity to Germany and the Low Countries made it a flashpoint in both World Wars.

Lately it’s been eclipsed by Felixstowe, the container port across the bay in Suffolk, and Harwich International, the cruise and ferry terminal a few miles away.

‘Most people think of Harwich as the place where they go and catch a ship to Europe,’ says David. ‘What we’re talking about is the old, medieval town of Harwich.’ In fact, they’re separate places, with separate railway stations - Harwich Town and Harwich International. This separation has preserved the character of the old port, saving it from redevelopment. There are only a few modern eyesores. Squeezed onto a narrow promontory, surrounded by the North Sea, it looks like the setting for a Georgian costume drama – Carry Onm Horatio Hornblower, perhaps.

The other thing that makes it so good for oldies is that it’s so easy to get around. Trains from Manningtree (on the London to Norwich line) terminate at Harwich Town station, a short stroll from the heart of town, and the town itself is tiny, barely 900 yards by 450 yards. All of it is walkable, with hardly any traffic. The terrain is flat, distances are short and there’s a nice strip of sandy beach.

We stopped for lunch at The Pier, a smart hotel on the waterfront with views over the busy dockyard, and the Stour and Orwell estuaries beyond. It used to be a railway hotel, built for passengers transferring between London trains and Continental ferries. Today it’s a destination in its own right, decorated with vintage railway posters from Harwich’s heyday as a seaside resort. Madeline had smoked salmon and a glass of champagne. Très chic. I had fish and chips and mushy peas and a pint of bitter. Yum yum.

Over lunch I asked Madeline what makes Harwich so special. ‘It’s intimate; it’s ancient; it’s so historic. There’s so much still here,’ she said.

We finished our tour at the top of the High Lighthouse, so called because it’s higher than the Low Lighthouse, 150 yards away. Why did Harwich need two lighthouses, so close together? Well, if you were out at sea, looking for a safe passage into port, you simply lined up these two lights, and that gave you the correct course. How clever. The Low Lighthouse is now a Maritime Museum. The High Lighthouse marks the end of the Essex Way, an 82-mile hiking trail that runs all the way to Epping.

My train back to London took an hour and a half. Next time I plan to walk it.

For more information about historic Harwich and Mayflower 400, visit www.harwich-society.co.uk

What is immersive theatre?

Rebels without a pause - Liz Hodgkinson

Olden Life: What was a dickey seat?