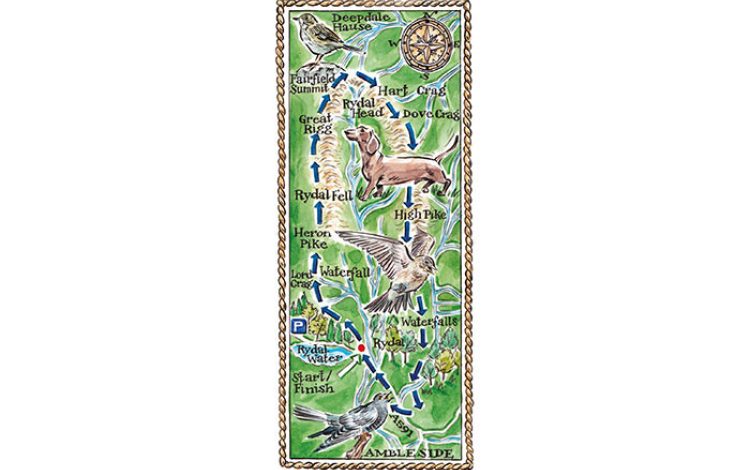 Patrick Barkham returns to the Lake District after two decades, Betty, the miniature dachshund, in tow

I had not taken a walk in the Lake District for 20 years.

I arrived to the soundtrack of dark warnings that England’s most majestic Alpine landscape had become a giant car park and litter bin – its mountain tracks eroded by 4WDs and mountainsides wrecked by sheep. Would it be stripped of its World Heritage status?

The reality was a landscape under some strain and undergoing change. Some of this will be for the better, as Cumbrian farmer James Rebanks’s writing makes plain. There are native trees where, 20 years ago, there was none, for instance.

Granted the most wonderful gift – a sunny day liberated from children – I soon realised that the main prerequisite for a good stroll in today’s Lakes isn’t mountain boots or Nordic walking poles, but a place to park. We nabbed the penultimate spot outside Rydal Church at 7.55 am, to begin the Fairfield Horseshoe, the most obvious yet finest circular ridge walk in the land.

I was striding out with two novices – my wife, Lisa, and our fourth child, Betty the miniature dachshund. So my ego was slightly bemused when I found myself lagging behind both lolloping Lisa and scuttering Betty on the steep initial clamber up Nabs Scar.

When we paused and turned round after a mere 20 minutes’ slog, Lake Windermere and Ambleside, a toy town in slate, were already spread out below us. Boats made little comets of white water on the lake. Cuckoos’ calls echoed from the deep green valleys.

On the ridge now, this walk delivered what so few earth-bound trudges can: a feeling of almost flying. Alongside us, meadow pipits hopped from rock to rock and skylarks rose up and song-clashed like rival MCs. Cotton grass waved in the breeze.

As we continued a gentle ascent, other lakes revealed themselves one by one: Coniston Water and Easedale Tarn, and then the great sweep of Morecambe Bay to the south and whispers of North Wales beyond.

Fairfield may be the 15th-highest peak in England but its summit is large, flat and devoid of any vertiginous charisma. There are no selfie-friendly crags, which may add to its appeal.

I was led to believe that the fells were now overrun with trippers but, on this summit, and on this day, there were no hordes of disposable-barbecue-burning barbarians. The number of walkers seemed about the same as when I was last here in the 1990s.

There were many more, however, of another kind of mountain climber.

Today’s fells are swarming with perky collies, bog-swimming Labs, frenzied spaniels – and Betty, who received more adulation than them all.

Her four-inch-high legs were trotting at least 12 steps for every one of mine, but she never once panted like I did.

‘She was a greyhound when she began,’ joked a walker at the summit.

Given Betty’s lack of familiarity with the fells, I did not risk letting her off the lead, especially when I saw how she grabbed and enthusiastically chewed every stray tendril of sheep’s wool she passed. But, shortly after admiring the discipline of an off-leash Cockapoo, we glanced back to see him haring after sheep, chastened owners hurrying after.

If rewilders don’t drive the sheep from the fells, this new generation of doggy climbers might.

The gentle descent was a joy, the sun shone all the way and, six hours later, we reached Rydal again, exhilarated by the air, exercise, space and peace.

To my surprise, this stupendous stroll had not turned the novices into Wordsworthian Romantics.

‘I still don’t get this walking up a hill and back down again,’ harrumphed Lisa.

And Betty? Despite her impressive hiking debut, I divined her verdict the next day when I treated her to another peak and spent two hours battling a paw-dragging, altitude-shy sulk more commonly associated with my human children.

We walked anticlockwise round the ten-and-a-half-mile Fairfield Horseshoe, against the recommendation of Alfred Wainwright, doyen of Lake District walking. This was because we spotted promising-looking ‘falls’ on the map on the final descent that might’ve offered an end-of-walk swim. Unfortunately the stream was fenced off, but I still recommend anticlockwise, getting the toughest ascent out of the way first and finishing at Wordsworth’s gaff for tea