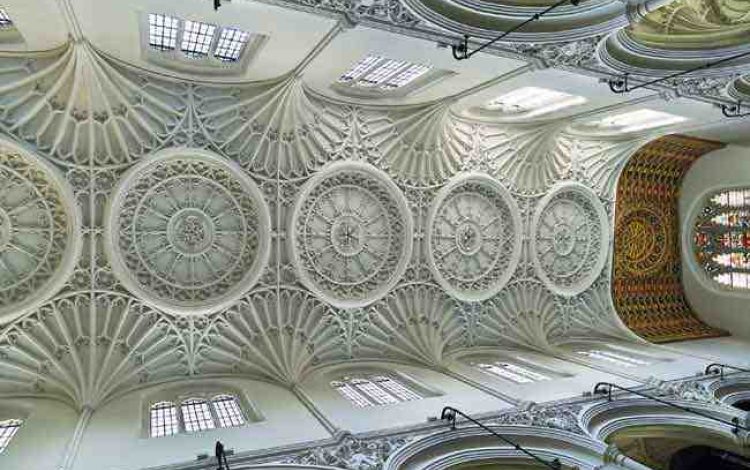 Today in 1940, St Paul’s received a direct hit in the Blitz. Harry Mount admires the cathedral and Wren’s City churches

My God, we’ve had a terrible time over the last 18 months since the pandemic first struck. Over 137,000 people have died in Britain alone.

It won’t be much consolation but things were much, much worse – for Londoners, anyway – 355 years ago, with the Great Plague of 1665-66, followed swiftly by the Great Fire of London in 1666.

The Great Fire did, though, produce the finest architectural achievement this country has seen: St Paul’s Cathedral and the 51 City churches (88 were lost in the Fire), all by Sir Christopher Wren.

Deep tragedy caused exceptional beauty. Is it too much to hope for that an artistic genius will produce something similar, if not on such a magnificent scale, after, God willing, the pandemic goes?

No architect before or since has had such a commission: to build so many churches and a cathedral. They were all built in Wren’s long life – he died in 1723, aged 90. But, still, St Paul’s was the first cathedral to be finished in its architect’s lifetime – medieval cathedrals took centuries to build.

Appallingly, Wren was taken off the St Paul’s job in 1718, aged 86. George I replaced him as Surveyor of the King’s Works with a jobbing Palladian architect, William Benson.

In his late 80s, the sacked Wren walked along Cheapside to see his cathedral finished with a pointless stone balustrade. A distraught Wren declared that some people, ‘like ladies, think nothing well without an edging’.

Otherwise, though, Wren largely got his way, producing a sort of Light British Baroque. He couldn’t go as far as Borromini and Bernini, who filled Rome with high baroque – all swirling convex and concave curves, with dancing skylines and ever-shifting planes. That would have been far too Catholic for cool, Protestant, northern tastes.

Wren did sneak in some baroque touches – in the St Paul’s dome, the rhythm of its colonnade subtly broken by stone niches (pictured, bottom right).

St Vedast’s was John Betjeman’s favourite spire. He loved the subtle, baroque way the lower stage is concave and the upper stage convex. He loved, too, how the light changed in the open windows of the spire as you walked by – sometimes lit by sky through the windows on the other side, sometimes in black shadow (below left).

Wren tried to realign the City’s street plan with straight boulevards – as Paris and New York would later do. But the power of land law meant residents held on to their irregularly shaped, pre-Fire plots.

His masterpiece, St Stephen Walbrook, sits on the small site of the obliterated pre-Fire church.

Enter the church and you’re in heaven – a heaven that feels surprisingly big (see above). Wren achieved this by flooding the building with light from surrounding windows and an oculus in the dome.

A Fellow of All Souls and a Professor of Astronomy at Gresham College, Wren was a brilliant mathematician. He pulls off two mathematical design tricks at St Stephen’s. He places a Greek cross (with equal-length arms) at the heart of the church. And he extends it towards the entrance into a Latin cross (shaped like Christ’s cross).

So you get the double effect of processing along a nave before finding yourself right at the centre of the action. It’s now occupied by Henry Moore’s travertine marble altar – compared by John Betjeman to a Camembert.

Wren also pulls off the trick of putting a dome on a square base by placing eight arches on eight columns. The arches are connected with pendentives (curved triangles) to produce a circle for the dome to sit on. Abracadabra!

He could really do anything. Wren could imitate pre-Fire Gothic – as at St Mary Aldermary, with its delightful, Perpendicular fan vaults; or in St Dunstan-in-the-East’s flying arches, topped with a cockerel weathervane.

No two churches – or spires – were the same. Look at the steeple of St Bride’s (below left), copied by an early 18th-century pastry chef, Thomas Rich, for his wedding cake – and a billion wedding cakes since. Then compare it with St Augustine Watling Street – another Hawksmoor collaboration, bombed in the Blitz, like so many Wren churches, and partially rebuilt.

The spire (pictured below) has pinnacles, each surrounded by four scary, shrieking gargoyles. Above them are four S-shaped scrolls, below elegant urns and what Angelo Hornak calls ‘an elongated shallot’, topped with an arrow-and-pennant weathervane. Pure joy!

Wren also employed the finest craftsmen, such as Grinling Gibbons, who died 300 years ago, in 1721.

Look at the Gibbons font cover (below left) in All Hallows by the Tower, which, like the Tower of London itself, survived the Fire. Wheat, flowers, grapes and apples are plucked by cherubs – so pudgy you want to squeeze their ultra-lifelike, limewood flesh.

For stone-carving, Wren hired Caius Gabriel Cibber, who sculpted the relief at the foot of the Monument to the Fire, showing Charles II flying in, a deus ex machina, to save the burnt-out City.

Wren built the Monument (left) to the designs of another genius, Dr Robert Hooke (as in Hooke’s law of springs) – dubbed ‘England’s Leonardo’.

Cibber also carved the relief on St Paul’s of a phoenix rising from the flames, with the Latin RESURGAM (‘I will rise again’) inscribed beneath.

Here’s hoping that, if and when Britain and the world recover from the virus, a 21st-century Wren will rise again to lift our spirits.

Angelo Hornak is author of After the Fire: London Churches in the Age of Wren, Hooke, Hawksmoor and Gibbs