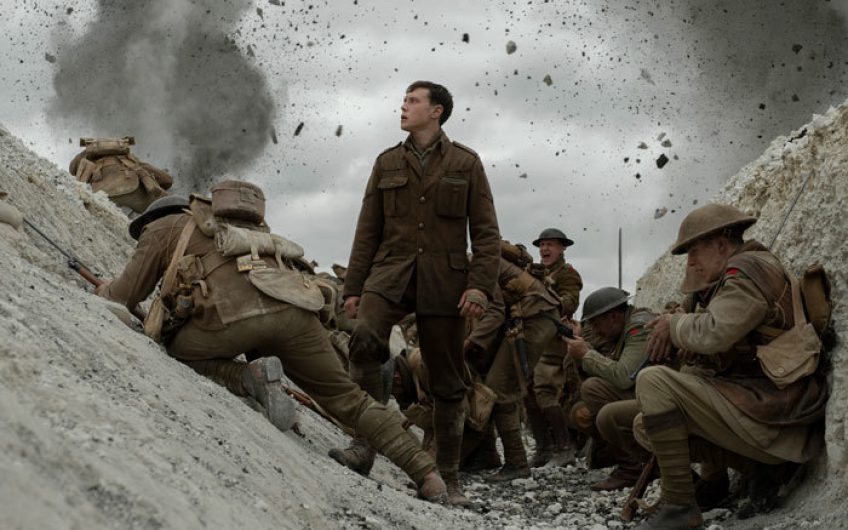 Last night, I left the Brixton Ritzy, having just watched Sam Mendes’s 1917. I felt like I hadn’t taken a breath in two hours. It was a relentless experience.

The story is very simple. Two men are sent to deliver a message from the top brass to stop an attack. The lives of 1600 men are in the balance, one of whom is the brother of one of the messengers.

The film is made to look as if it was made in one take. Like the one-sentence novel, it sounded like a bit of a gimmick. It worked.

But it is hard to get used to. The two protagonists Lance corporal Tom Blake (Dean-Charles Chapman) and Lance corporal William Schofield (George McKay) go from green field to support trench, then across no man’s land in the first ten minutes – while almost constantly in motion.

It’s hard to know what to look at. But it’s only when you stop seeking that you find.

Allow the eye to drift, as the soldiers’ would. Watch the scene. Don’t scour it for clues. There aren’t many big shots and the closeness of the camera and the tightly choreographed route taken by the actors allows for extraordinary attention to detail. Whether it’s how a flare lights up the ruins of a town, the way men wear their uniforms or, more gruesomely, the twisted bodies of the dead.

The one-shot approach isn’t only mentally exhausting. It is brutal on the emotions. The tension never breaks.

The camera moves seamlessly from the death of one man to a line of men relieving themselves against a wall to a truck full of joking men who grumble disapprovingly of their po-faced comrade in whose arms – they don’t realise – a man has just died.

Like a videogame, the world builds itself around the protagonists.

It is very easy for war films to descend into cliché. The 2017 production of R. C. Sherrif’s Journey’s End embraced the cliché. Commanding officers dining on fish and wine well behind the line, while sending good men to their deaths on needless missions. Nothing new.

Mendes brings out the tension between the hierarchies without making them seem cartoonish. Colin Firth’s general, guided by good intelligence, seeks to stop the attack. But the frontline lieutenant is still darkly amused by the order to send two men on an eight-mile trip across what were German lines to deliver a message. And yet the general is proved right…

The only cliché which does survive is the state of the German trenches. They were much better! Better built and better kept. ‘Even their rats are bigger than ours’, says Lance corporal Blake.

Something that was profoundly striking was the use of green throughout the film.

There are three moments when it is most noticeable. Each time it is linked to home – the receiving of mail, when Blake remembers picking apples in his family orchard and when Schofield looks at a picture of his family.

Propaganda posters from the First and Second World Wars often used rolling hills and pleasant pastures to illustrate their point. So much of British patriotism is tied up with the idyll of the untouched countryside. The film really plays to that.

And it is in these touching moments that you see not only what these two soldiers were fighting for, but also that there was a time when they didn’t fight at all.\