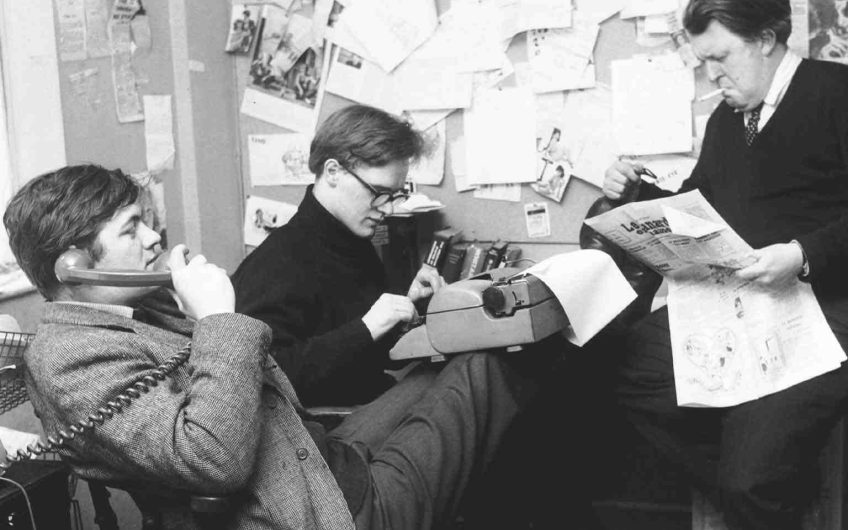 Private Eye began in 1961. Elisabeth Luard worked as a secretary there – and then married the owner – in its earliest days

Some of us knew you when you were young. But a bird’s-eye view is not what’s usually to be found in the magazine’s biographies. Birds – aka dolly-birds – were the handmaids in the Gilead of those times. Trained as shorthand typists, we were considered temporary, pending marriage and babies.

The wind of change – social as well as political – took time to reach the ’burbs, let alone beyond, but what was happening in central London drew would-be writers, actors, artists and musicians to a fertile rubbish heap in which things grew.

Among the new growth was Private Eye, founded on 25th October 1961. I started working there on issue six at the suggestion of Andrew Osmond, the first proprietor – and the provider of enough money in the Eye’s kitty to print the early issues on scrappy, yellow paper, stapled together by hand.

Andy – tall (important in a dancing partner) and a little exotic, as he’d done his National Service as an officer in the Gurkhas – was a part-time debs’ delight. The main attraction was not his good looks (though that certainly helped) but a willingness to discuss serious stuff with an uneducated young woman – as were most of us who were put through the season’s marriage market – unlike the chinless wonders heading for the City.

When Andy suggested I help out with the secretaries at a fledgling Private Eye for a fiver a week, that suited me just fine. Previous experience in estate agents’ typing pools had led to my being chased round the desk by a heavily sweating, unacceptably elderly, married boss. My employers at the Eye, installed rent-free up a narrow staircase in a warehouse in Covent Garden stacked with paperback copies of P G Wodehouse, were young, clever, schoolboyish and apparently uninterested in sprinting round the furniture.

The first editor, Christopher Booker (1937-2019) – endearingly bespectacled and kind to the office help – provided the campaigning journalism. Willie Rushton (1937-1996), portly and jovial, did the scissor and pasting for the printer, and drew the cartoons. Photographic illustrations – Candida Betjeman’s armpit, a rape scene in which my torso and boots figured – were provided by Maurice Hatton, known (accurately) as Spotty Maurice.

I, as Elisabeth Longmore, was called Lizzie Longpants (reason unknown, at least by me). Peter Usborne (the magazine’s co-founder, born in 1937) checked in occasionally just before pub opening. So did John Wells (1936-98) – model (maybe) for Rushton’s Little Gnittie, the Eye’s logo – on escape from his day job, teaching Eton schoolboys their letters.

The rest – the stories and jokes that defined the mag – were the business of Richard Ingrams, saintly founder of The Oldie (born in 1937 and happily still with us), who took over as editor in 1963 when Booker unwisely went on holiday. Richard’s office presence was enigmatic – a bit like the all-seeing eye in The Great Gatsby. And he always wore the same saggy-pocketed, corduroy jacket at a time when Carnaby Street was dressing dandies in frilly shirts and velvet bell-bottoms. Girls are naturally shallow – they notice these things.

Secretaries typed up hand-scrawled copy on an Olivetti manual, wrote the invoices, made the tea and, when push came to shove, sold the mag on the street. The only other office help, Mary Morgan (later the first Mrs Ingrams), couldn’t type. Nor could the men, except Booker (with two fingers).

While the Eye gang were stapling together the first copies in someone’s girlfriend’s family’s basement in Chelsea, Beyond the Fringe was transferring from the Cambridge Footlights via Edinburgh to London.

Among the players – Jonathan Miller, Alan Bennett and Dudley Moore – Peter Cook was the true subversive.

Riding on the success of the show, Peter and his Cambridge friend Nicholas Luard (1937-2004) – I married him – opened a satirical theatre club in Soho, The Establishment, modelled on Le Canard Enchainé and the underground cabaret clubs of 1930s Berlin. The Establishment, like Private Eye, opened in 1961.

However, when the Eye ran out of money to pay the printer and Andy was keen to recuperate his £500 (about the price of new Mini), this secretary (in miniskirt and boots) was dispatched to flog the mag to the audience at The Establishment while discreetly inviting investment by the club’s proprietors. Peter Cook and Nicholas Luard duly invested in the magazine.

It worked for Private Eye – and for me too. My future husband, profiled in Paris Match as London’s golden-eyed king of satire, was knock-out gorgeous. Others thought so, too. So much so that kindly Booker walked me round the block to warn me the Eye’s new proprietor wasn’t appropriate husband material. Love is blind, but he was right.

If the Eye was my day nursery, an opportunity to join the boys in the playground, we were in agreement about our separate roles. I was willing to perch on the edge of a desk and paint my nails for a TV programme about office life at the Eye.

But the pay-off – the reason I took dictation and made the tea in a cramped office for little pay – was the chance to assist in any way I could in the unravelling of a patriarchy that had dominated my childhood.

At the rehoused Eye under its new ownership, Cookie was back from New York and it showed. Writs came in thick and fast. Many of the issues raised mattered to women. Police corruption wasn’t news to us. Don’t trust a policeman in a van in the 1960s – or now. ‘Give us a feel, darlin’ ’ was the least of it.

And it was no surprise when the Profumo scandal broke. Most of us girls about town knew what Profumo and friends were up to in the Cliveden swimming pool.

There are times when everything comes together, and stuff happens because it must. My granddaughters no longer have to ask a man to guarantee a signature on a mortgage or passport application.

While women scarcely rate a mention in the Eye’s early history, this is not the whole story. Right now, if Carrie Johnson is the most powerful woman in government or outside it, I’ll bet she doesn’t cook – let alone type up office memos – even if she can.

Things change. Mostly for the better. I rest my case.