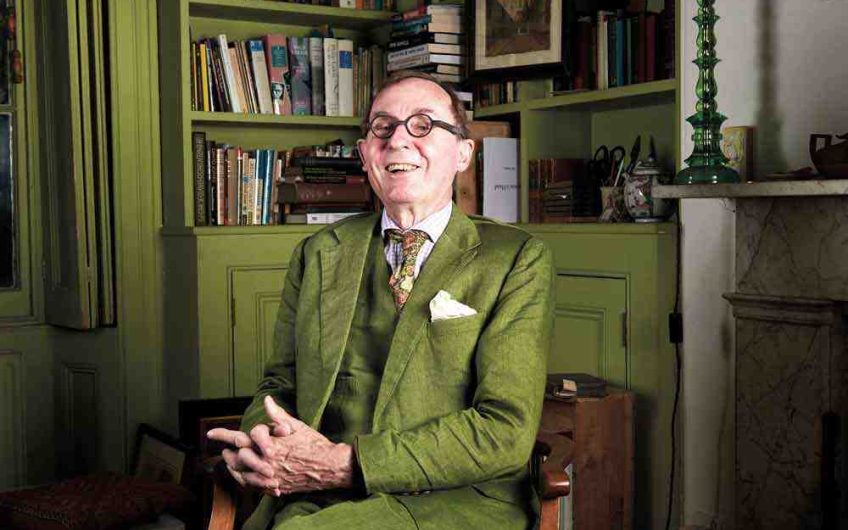 A.N. Wilson has reached his three score years and ten. It will come as a surprise to those readers who had assumed that he had been around far longer than that.

Since the 19th century in fact, when he had a place at the heart of the government, court and literary circles he writes about with such authority – or earlier still. He has long reminded me of those idiosyncratic parsons of 18th-century literature – like the Reverend Mr Yorick from Laurence Sterne’s The Life and Opinions of Tristram Shandy, who move through the world with an angel on one shoulder and a devil on the other.

To celebrate his birthday, I am having coffee with Andrew in a local café. We planned to meet in his new house by Hampstead Heath (he is pictured here in his old house in Regent’s Park Terrace), but he only moved in last week. As he puts it in an email, ‘It will still be a case of “Jus’ move it up your end, Graham. No – to yer roight, vat’s roight”, followed by the noise of another spindly, Georgian bannister turning to matchwood. We would not hear ourselves speak.’

At times like this, he recalls Charles Dickens, the subject of his most recent book. When I reviewed The Mystery of Charles Dickens for The Oldie, I suggested Wilson and Dickens were so alike – sharing an essentially comic vision and preternatural literary energy - that the reader is left pondering instead the mystery of A N Wilson. His mystery is what I now have to solve.

Looking dapper in an aqua shirt and tie, tweed waistcoat, jacket and raincoat, with not a grey hair in sight, he’s absorbed in a newspaper when I arrive. I sit down, and we’re off.

Talking to A N Wilson is like an amateur playing tennis with a pro; he lobs each of my balls back into the court, winning in straight sets. Meghan Markle, he tells me, is fifty years old if she’s a day, while Prince Harry is a medieval character straight out of Chaucer. He spent most of lockdown rereading Chaucer – so he knows what he’s talking about.

On the subject of turning seventy, he quotes the late actor Jonathan Cecil: ‘Seventy is the new eighty.’ Andrew’s table talk is shot through with similar quotations.

His dress sense, he tells me, is inherited from his father, Norman, and he means this literally. Norman passed his old clothes on to Andrew, who had the hems and seams adjusted where necessary.

Norman himself, when he was strapped for cash after retirement, ‘had a seamstress remove the labels from his smartest suits and stitch them into his cheaper ones’. Andrew talks a good deal about his father, who was managing director of the Wedgwood factory, smoked fifty Senior Service a day, and ‘loved swanky cars like Bentleys and Lagondas’.

He also talks a good deal about Dickens; our entire conversation, I now realise, circled around Norman Wilson and Charles Dickens.

‘George Bernard Shaw said that Little Dorrit was a more subversive book than Das Kapital,’ he says. ‘Marx saw only half of everything, but Dickens saw it all: he knew what was wrong with Victorian England.’

His father’s childhood had been, says Andrew, ‘purely Dickensian’, but then so too was Andrew’s. Was it true that his prep-school headmaster was a sexual pervert, and his wife a sadist who made him eat until he was sick, and then eat the sick? ‘Absolutely, yes.’

Does he feel any anger towards his parents, who were friends with the headmaster and his wife and stayed in their house when they came to visit their son?

‘None at all. My father was an innocent who couldn’t see wickedness because he had none himself. He was, in that sense, like Harold Skimpole.’

Skimpole is the character in Bleak House who reminds his friends, ‘I’m a child, you know.’

Andrew was raised in the Potteries where Norman worshipped at the shrine of Wedgwood. ‘Because Charles Darwin was a Wedgwood, my father was a fervent atheist. He thought that Christianity was a load of baloney; he made scenes every Sunday morning when my mother returned from church.’

Having once considered the priesthood, Andrew has oscillated in his adult life between believing and not believing. Does he regret not joining the church?

‘Not at all. The priest thing lasted for about two weeks, in my early twenties.’

He was then lecturing in Anglo-Saxon at Oxford University: does he regret not continuing as a don?

‘No. I’m not a scholar, and I will be eternally grateful to Alexander Chancellor [the late editor of The Oldie] and Peter Ackroyd for inviting me to join The Spectator.’

He denies that he’s more than averagely clever. ‘I’m a bookworm. It’s a different thing entirely. I bet any reader of The Oldie can beat me at Sudoku. That’s the real test of cleverness; had Plato seen Sudoku, he’d have said, that’s what I was getting at all along.’

Sam Leith, the Spectator’s literary editor, has suggested AN Wilson will be remembered as a journalist first, then a non-fiction writer, then a novelist. Would he prefer it the other way round?

‘In my dreams, yes. Elderly people think I still am a columnist. I’m often congratulated on my latest column in the London Standard, even though I haven’t written one for 12 years. My happiest working times have been as a journalist, wasting time with other journalists. They write wickedly but they are not wicked people. My journalistic heroes are men like Michael Heath – a real commentator on our age – and Bron Waugh. Peregrine Worsthorne and Malcolm Muggeridge had served in the war.’ He also reveres Paul Dacre, an admission which ‘makes people scream at dinner tables. He was the best editor of his lifetime. He and Peter McKay [a Daily Mail veteran] opened my eyes to a new world, because they hated the one they depicted.’

Wilson is not, however, a dyed-in-the-wool Tory; he votes for whichever party opposes the party he currently hates most. ‘I’ve voted for more or less everyone, including Plaid Cymru, whose founder [Sinclair Lewis] was one of the great political figures. The last time I voted in an election was for Gordon Brown, but nothing would induce me to vote now.’ He voted Remain, however, in the referendum, and ‘would do so again.’

We are talking about a world that has disappeared, or is in the process of disappearing. Even sex, we agree, has become retro because only oldies seem to want it. Andrew’s beloved Church of England ‘is finished’; he was not sad to sell his home in the Gloucester Crescent environs because his neighbours, like Beryl Bainbridge and Jonathan Miller ‘are all dead now.’

Miller –‘the cleverest man in England’ - would demand, were you to meet him by the letterbox, whether you had ever considered the ‘difference between Wittgenstein’s Tractatus and the Philosophical Investigation?’.

Knowing Andrew Wilson, he probably had.

I try a few more serves. Why does he work so hard? ‘To avoid boredom’. Do you fear boredom? ‘No, because I’ve never felt it’. So how do you know about it? ‘I watched my father becoming more and more bored when he retired. He had nothing to do all day except smoke, and then he gave up smoking.’

What did you read this summer? ‘Tristram Shandyover and over again.’ What’s your next book? ‘A Shandyesque memoir of my father, to be called The Life and Opinions of A N Other.’

The Chiddingstone Castle Literary Festival kicks off this weekend!