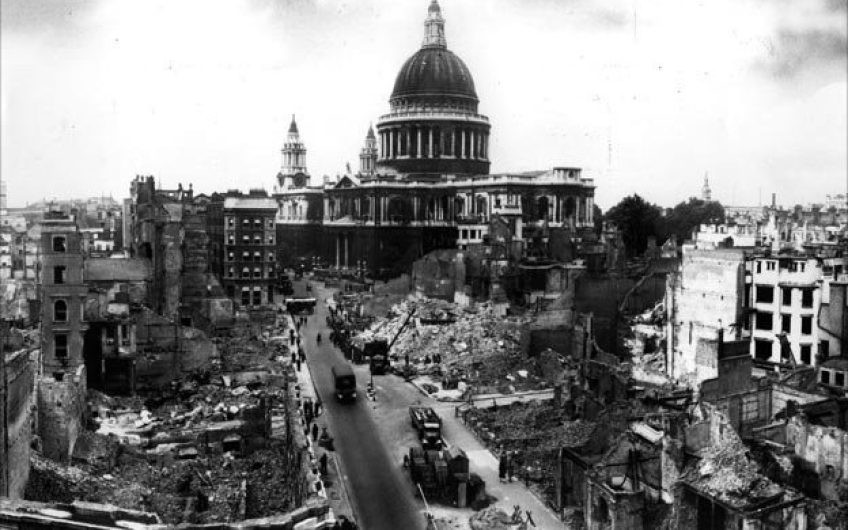 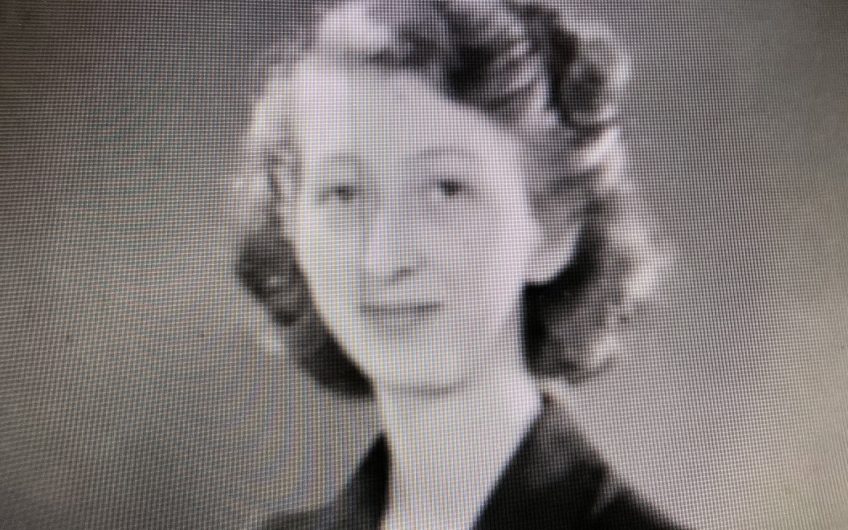 Darlings all. There doesn’t seem to be so much news as usual this week. Geoff[1] has moved from Reading back to Bristol, where he seems to be the equivalent of a general to a non-existent army of his own imagination. He has a free hand to do what he wants, dozens of clerks and A.T.S. at call on an enormous switchboard which he has had installed by his order, laid with direct lines to all his “best friend” generals. I can’t quite make out whether he is going to stay there or whether he is going to move out into the country as soon as he gets tired of playing with his pet telephone.

Geoffrey darling. I can’t think why you are still only a Captain, it must have been a grave oversight. Honestly what with you and Harry[2] I shan’t be able to address the envelopes to my letters as you will have gone up one between each post! You do sound happy though which is all that matters. Geoff I rang Miss Moseley[3] up this evening and bothered her with a very tiresome thing really. The telephone switch girl at the office decided to evacuate her mother and four smaller brothers and sisters. But her mother wouldn’t be parted from her furniture. So after some difficulty a cottage was found which would take them. Then the poor girl couldn’t get a van to take the things and while she was searching for one, the owner let the cottage to someone else. The girl was almost in despair today, as they had already given notice on their house in Hackney, taken up the line etc. and she didn’t know what to do. I said I’d help and I wondered if you had any cottage anywhere. Miss Moseley said there was the flat over the garage, but she didn’t know if you wanted to let it. The girl is very nice, but family are poor as church mice, and I think exist on the mother’s pension, and whatever the two daughters who are earning can contribute. I should think they are all that could be desired as far as cleanliness goes, but that is all I know about them. They would be perfectly happy in a small cottage, with a very low rent, but I didn’t think such things are still to be had. If you want to keep the garage flat for anything else don’t dream of putting them in there.

Maria darling, we are all thinking more and more of you. By the time you get this, the Rancher Earl may have made his appearance. If so do give him (or more possibly – her) my very best love and a huge kiss, and tell my new niece, (nephew) how miserable I am not to be there to greet it, as most of the rest of the family have been greeted. It really is almost more than I can bear, and I long to be a stowaway on the Clipper[4] and come out to you. Geoff says in his letter tonight that you have got the Bowes Lyon Nanny, I am glad as she will be a wonderful standby, and should be nice and English-ified. By the way Daddy talks at some moments, you’d think that the war might be over before breakfast tomorrow, and he with a fortune, a real one this time (!) in his pocket. It is true to say that we have been letting off steam on the Italians lately. Daddy[5] has got himself all tied up about what will happen to Albania if the Greeks conquer it and walk in. Obviously they won’t hand it with a bag of nuts to old Zog[6], for him then to be conquered again. On the other hand we have made so many pretty speeches, that according to our principles it will be no better for the Greeks to have it than the Italians. It is complicated. Reg[7], I’m sure you have a solution to this one.

Mummy[8] went north to her tour in Scotland, or visit to Edinburgh or whatever it was. It is to end with a visit to Aunt Sybil Middleton’s where Frances[9] will be too. Then on Monday they both come down, and Frances stays either with Peggy Baring[10], Katie[11] or Joyce, I hope whoever it is, is expecting her, as I don’t know which it is meant to be.

She will come in for a great excitement, as Lavinia[12] is getting married next Wednesday. I spoke to Elizabeth[13] on the telephone this morning and she is getting rather frantic. I must say a war time wedding does have even more complications than a peace time one. To begin with she has no idea how many people will be coming, as its no good sending invitations as nobody is at their address now, also its an awful waste of paper and time. To go on with, it's not worth risking buying too many things well ahead, as there’s no knowing whether they will all get bombed or not. Lavinia isn’t very much help either I gather, as she has an idea that servants will just appear as she walks in through the front door of her house in Wimbledon, so Elizabeth having left it till now, has now decided to go off and get them without consulting Lavinia. Apparently she has quite a nice house, with a garden and a tennis court. As she has only got it for 2 months, she can’t do too much damage to it. She is going to have three days honey moon and then go straight there.

I don’t know what Elizabeth will decide to do after. Dennis[14] is down at Pamflete[15], and urging her to take a cottage down there and give up the A.R.P.[16] work. I think Elizabeth rather dreads leaving it in a way, as she has stuck it so long, and made such a job of it, and it would be awfully difficult to lead a sheltered country life while the job was still to be done. Still she can't very well live in that huge grim house alone.

Did you see that Mary Palmer[17] has announced her engagement to Anthony Strachey today. I am going down there for the weekend, and I will find out then when they propose to get married. Originally they said after the war, but that may have changed a bit now. Makes you feel old, don’t it? I’m getting all left behind like the cows tail.

I spoke to V.[18] on the telephone this morning too. She seemed well and had been to Joyce’s play. She said Joyce stood out beyond any one else, easily and was wonderful, and almost brought the house down after her singing. I long to go to it, but it is so difficult. The only time I get a Saturday, means I get Sunday too, and then it seems a pity not to go out of London. Still the time may come. I think this next week with any luck. Lady Reading[19] is going on tour, and Frances coming south, so I think an opportunity should be seized, while the going is good.

Our nights are very much quieter here now. The new method seems to be most efficient, and there hss been a great difference all this week. I went out to dinner and dance afterwards on Monday, a great event these days. David Verney[20] suddenly turned up on leave, so he and I and Joscelyn dined out. He is having a wonderful time on one of the American Destroyers. He is 1st Lieut. And he and the Captain are about the only two who have been to sea before as the others are R.N.V.R. as a result, David runs the whole thing practically. It is amazing the responsibility they put on the really young boys in the navy, as David is terribly young still. He says the steam heating installation is wonderful. They turn it on for about an hour a day and the ship is warm for the whole day. When the Americans handed over in mid summer they had the steam heating full on all the time. David said he’s never known anything be better, and yet the American sailors didn’t mind a scrap. Wireless everywhere and wonderful luxury, so that “in harbour” they are blissful.[21] He didn’t say much about what they were like at sea as he only had a short trip back. He’s panting to go out again. Gosh how I should hate it.

I’d better stop this letter now and go to bed. I’m afraid it is short, but there doesn’t seem to have been much happening this week.

Love to you all,

1. Geoffrey, Earl Waldegrave (1905-95), married to LMG’s older sister Mary, who had evacuated to Canada with their five daughters (and expecting a child).

5. Arthur Grenfell (AMG) had interests in a chrome mining company in Skopje, nearby in then Yugoslavia.

8. Hilda Grenfell was visiting other parts of England and Scotland as President of the YWCA, which was then heavily engaged in providing emergency soup kitchens and other civil support functions.

9. Frances Campbell-Preston , LMG’s older sister, was living in the family home in Argyll of her husband Patrick, a PoW in Germany, with their baby daughter born earlier in 1940

11. Katie Lort-Phillips, older sister of Frances and LMG’s, living with her three children with Hilda’s sister Hermione, whose husband had been killed in the London blitz in October.

20. David Verney (1918-92). Friend of LMG’s. Royal Navy. His ship, HMS Keith, had been sunk off Dunkirk on 1 June. He had since temporarily commanded a French submarine-hunter, requisitioned in Portsmouth after the French Armistice. Joscelyne, also a friend of LMG’s, is his sister.

21. One of the 50 destroyers exchanged for US rights to bases on British territories in the Caribbean under “Lend-Lease”, signed on 2 September. They were less well reviewed by the navy for their war-fighting capability: built towards the end of the First World War, only 30 were in service by May 1941. They mostly served in convoy protection roles; one was exploded deliberately in the St Nazaire raid.