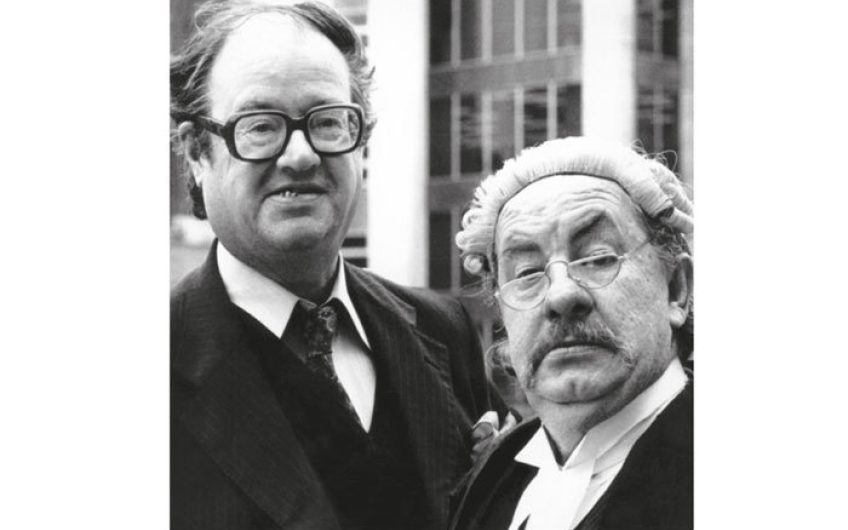 John would have been 96 this year. It’s odd to think that he died ten years ago this week and amazing that he managed to live to the age of nearly 86, dying in 2009.

He drank champagne and wine every day, and he was hardly what you’d call slim. He’d hadn’t done a minute’s proper exercise in his life. Whenever he heard that some fitness freak had had a heart attack out running, he’d say, ‘There, I told you so. Exercise is not good for you!’

Various doctors and physiotherapists tried to get him to gently exercise his ulcerated leg. It was caused by a deep-vein thrombosis after an operation to mend his ruptured Achilles tendon – acquired not by playing tennis but by tripping over the telephone wire in his study. He would tell them he couldn’t concentrate on writing if he moved his leg; and that was that.

He did occasionally swim in our rather small swimming pool and afterwards reward himself with a glass of champagne. We thought it rather amazing when, on Palm Beach in Australia, he went to the seawater pool. We later found out that it was actually only chest-deep and he was walking slowly up and down, making breast stroke movements with his arms.

He was not physically brave. Years ago, we were in bed when we heard a noise downstairs. Alarmed that it might be burglars, we got out of bed and moved towards the door. When we got to it, he firmly pushed me out in front of him.

But he was brave mentally. A few months before he died, I’d brought him home from hospital for the last time. A friend and I were sitting by his bed, wondering if he was coming to the end. He suddenly opened his eyes and declaimed, ‘I haven’t kicked the bucket, I’ve just turned a little pail.’

Five minutes later, he said, ‘They’re on the other side of the river. Little men with white teeth and little black hats. They’re getting the boat ready to come over and fetch me. But their journey may be in vain!’

He was determined to enjoy life and saw the funny side of most things. The night I met him, on New Year’s Eve 1969-70, he made me laugh. The next day, he took me out in my lunch hour to a fancy restaurant in Curzon Street and backed his Mercedes into a parking meter. Life with him was never dull.

I don’t think he ever felt guilt. He said it was a waste of time. He didn’t dwell on upsetting occurrences – he’d pretend they hadn’t happened. When his first wife, the writer Penelope Mortimer (I was always known as Penelope the Second), wrote her autobiography and sent him a copy, he shut it up in a drawer, because it was most unpleasant about me, as well as him. It had to be revealed in the end but, for three whole weeks, he was able to forget about it.

Writing was his life. He never spent a day without some hours chewing his handkerchief while putting pen to paper. He said his idea of heaven was to be working in his study with three attractive women sitting in the kitchen next door, quietly talking about how wonderful he was.

He loved women, and most women he knew loved him. He’d tell them how brilliant they were and made them laugh. He was never bored and, if he felt nothing interesting was happening, would start an argument.

I would argue back. Then I’d see a gleam in his eyes and know he was thinking, ‘That might be a good line for She Who Must Be Obeyed [John’s nickname for the fearsome wife, Hilda, in the Rumpole novels].’

Life with him was never a daisy-strewn path. He could be very annoying and demanding, needing constant attention. He was still a boy at heart. He was an only child and his mother spent most of her time looking after his interesting, blind father. I think he spent his early years living in his imagination, not involved in many childish activities.

He said that when he met Penelope the First, one of her attractions was that she already had four daughters (by three different fathers). He could join the gang and play the naughty boy, as she was six years older than he was.

He was a very funny man but he had a serious side. He was president of the Howard League for Penal Reform from 1991 to 2003, and totally supported my charity, which provides rural holidays for underprivileged city children. He was always ready to give support and advice to people with legal problems. Like his creation Rumpole, he was on the underdog’s side.

We spent forty years together, mostly at Turville Heath, his childhood home in the Chilterns. He loved it and loved the garden his father had built. He made me promise he could die here and indeed he did.

I miss him very much and feel lonely without him. I don’t think I ever really got to the bottom of him. Perhaps that is why life with him was constantly fascinating.