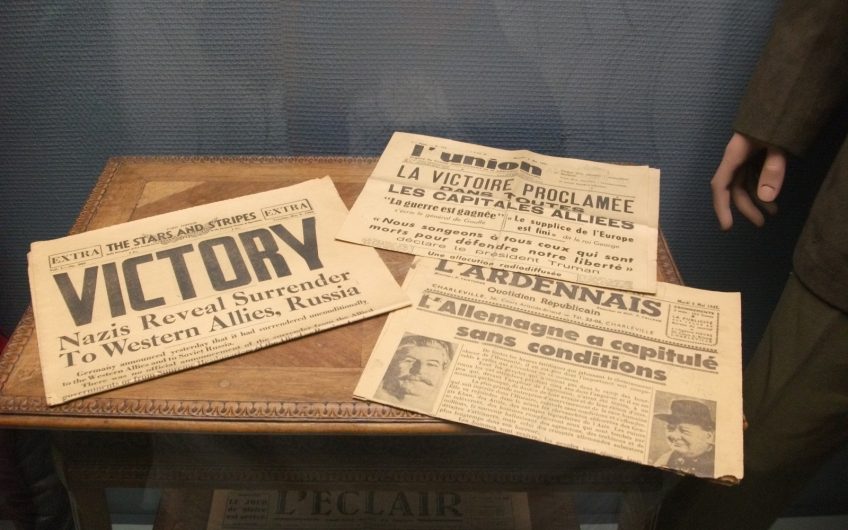 On 8th May 1945, Great Britain celebrated VE Day, the end of World War Two, and the end of the threat of invasion by Nazi forces. But for one small outpost of Britain the threat had become a reality.

The Channel Islands lie within sight of the French coast, and in June 1940 a successful invasion seemed inevitable. To avoid bloodshed Churchill’s government made the controversial decision to allow the German army to take over one small part of Britain, as British forces withdrew, to continue the defence of the mainland.

News of the withdrawal of troops had not reached the German High Command, so on June 28 the Luftwaffe's bombers and machine-gun fire caused devastation in St. Helier on Jersey and St. Peter Port in Guernsey with the loss of forty-four lives. As there was no retaliation, planes soon landed at the two airportsand German officers were taken to the Bailiffs of the islands, Ambrose Sherwill on Guernsey and Alexander Coutanche on Jersey, who surrendered with dignity.

For almost five years the islanders lived alongside the German occupying forces, until the islands were liberated on 8th May 1945. But what was life like for families who tried to live as normal a life as possible, while being cut off from the outside world? Joan Watts lived in Jersey at the time and was four years old when the occupation began. These are her recollections.

‘At the end of June 1940 my mother was in the nursing home with my new baby sister. My father was serving overseas and we did not see him again for five years. My sister, brother and myself were staying with my grandmother. A couple of days after the bombs we were told that everyone had to hang out a white flag at the front of the house. My granny reluctantly hung out a sheet.

‘We lived a few miles west of St.Helier, and didn’t see much of the Germans, although we did sometimes see them goose-stepping along the street. They usually treated the islanders well, and on one occasion an officer gave orders for the return of a barbed wire fence which had been requisitioned, after my mother complained that there was now nothing to stop the neighbour’s bull from entering our garden.

‘Supplies from mainland Britain were cut off during the occupation, although some supplies came through from occupied France. We had very little meat. Once our goat had twin kids, and it was only later that I realised where some of our meat came from. We didn’t have much fish because the fishing boats were restricted to certain areas, and daylight hours. The Germans were worried that people would try to escape. Those who got caught were shot. We sometimes collected shellfish and crabs.

‘We grew our own fruit and vegetables, including beans and peas, and obviously Jersey potatoes. Mother saved and dried the potato peelings, and made flour from whatever was available like home oak acorns,which were roasted and ground in the coffee grinder. Our supply of coffee beans and tea leaves had soon run out. Tea was made from locally gathered dried leaves, but we children mainly drank water, with some milk from our goat. The bread was quite rough and we had very little butter. Salt was evaporated from sea water.

‘We were barefoot a lot of the time, and our clothes were all hand-me-downs. Everything was ‘Make do and mend’, and my granny did all the alterations and repairs with thick black thread because that was all she had. We had a wood burning stove, which we kept supplied by collecting wood from the nearby hedgerows and woodland. There was also a hay box which kept food warm for some time.

‘I remember that in the final year there was no gas or electricity. We had no candles, only a small oil lamp with a shoelace for a wick. That last winter was very dark. Of course we did not know it was the final year.

‘By late 1944 the islanders were nearing starvation with many supplies not expected to last more than a few more months. The Red Cross organised supplies from Scotland, and from Canada which arrived in the SSVega, over the early months of 1945. The ship brought essentials which seemed like luxuries after the years of privation. Tinned and packet foodstuffs were shared out to each family, who collected their rations in whatever they had available, as most private cars had been requisitioned at the beginning of the war.

‘We made the long walk to collect the food parcels in the baby’s pram, and one day some soldiers stopped us and opened some of the boxes. They didn’t take anything, but it was scary. Before these supplies came through food was scarce. The newspaper contained hints on economical cooking, and a useful Exchange and Mart section. My mother once exchanged my uncle’s suits for food. When he came home after the war he was not impressed!

‘The newspapers had local news but they were German controlled, so were full of propaganda. They only told us what they wanted us to know about what was happening in the war. We had little idea about what was going on, apart from news gleaned from illegal radios. My mother went to visit friends once a week to get news from their crystal set, hidden under the floorboards. This was risky. Some people who owned radios had been arrested, and sent to camps in Germany.

‘We couldn’t send or receive letters from outside. We only got the occasional letter from my father, and then it was restricted to about twenty words, delivered by the Red Cross. There were long periods when my mother did not know whether or not he was still alive.

‘My first school was a dame school with only about eight pupils, and we walked to school by ourselves. When I was seven I went to the ‘big school’, with about twenty children. Our teacher was a Conchie, a Conscientious Objector from England. In the final year classes only started at 10 o’clock, which was great. We played croquet, and we had a scooter. I also had a rag doll and a golliwog. My sister had a china doll, but my brother threw it into the road and it broke!

‘Looking back I’m sure many of the islanders felt abandoned, but they realised that many more would have died if Britain had fought to defend the islands. In early May news began to filter through that the German commanders were preparing to surrender to the Islands’ authorities, which they did on 8th May. Many of us went into St. Helier and watched as British forces arrived and the German soldiers were taken off to British ships waiting in the bay.

‘As soon as the islands were liberated we got a letter from my father, and then parcels from aunts and uncles. The best gifts were a box filled with sweets given by friends and relatives, and a skipping rope with blue wooden handles. After a few weeks my father was able to come home on leave. We hadn’t seen him for five years, and he had never met his youngest daughter. By then I was nine years old.

Joan concludes, with no sense of irony, ‘As a child I was not aware of how bad things were. For me, it was a happy childhood. We were quite free.’

Joan Watts shared her memories with Glenys Adams. Both live in Liverpool.