A Decade of Rwanda Aid 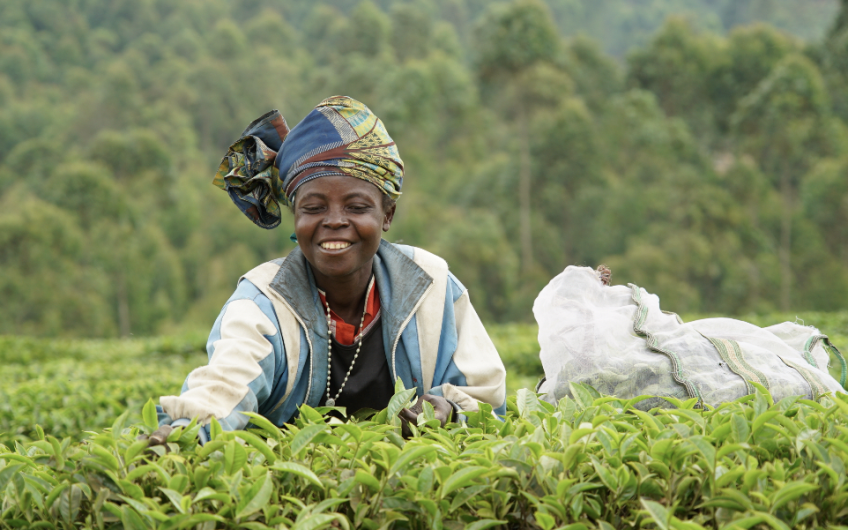 Recent history has meant that the beautiful ‘Land of a Thousand Hills’ has been forgotten, and Rwanda’s qualities have been overshadowed by the terrible memory of its past. I’ve just arrived back from filming for Rwanda Aid, which celebrates 10 years of work this October. Although there’s a long way still to go, the strides this country has made merit better representation than can fit on a football shirt.

At first sight of Kigali, the wealth is palpable. The shiny high-rise buildings announce a booming financial centre. But once you get out of the capital, it becomes clear that few people can afford to put cars on the road that the government has so painstakingly maintained. No matter how far you are from a town, you’ll always find people on foot. Many are carrying sacks on their heads, or bundles of sticks, or pushing a bike laden with comically long planks of wood. I even came across one woman carrying a wheel-along suitcase on her head, and a man single-headedly carrying an entire sofa with the table to match.

On our first day, the film team and I visited the school for street children in Kamembe, where Rwanda Aid operates. Our walk through town was punctuated by cries of ‘Mzungu! Mzungu!’ (White man! White man! ). We really were the only white people around, but were never hustled by salesmen. Because there are no tourists, the town’s economy doesn’t rely on the sale of souvenirs. People sell things that locals need for the price a local can afford. There are hundreds of shops selling shoes, mobile phones, and poor quality plastic homeware. They’re all clean and brightly coloured; sporting the hand-painted logo of ‘Huawei Smartphones’ or ‘Primus Beer’ alongside the name of the shop. Nothing stands taller than one storey, except the odd hotel being constructed in metal and glass behind bamboo scaffolding. It’s certainly a town on the rise.

The kids we met at the Street Children Project were cheeky and ambitious. After greeting us with singing, drumming and dancing, they told us all about their dreams to become soldiers, teachers, or – in one case – the president. Primary education is free in Rwanda, and obligatory by law, so the project is geared towards giving the children food, skills, and a sense of belonging to the community. They all help grow the vegetables they eat, and raise the pigs that will later be eaten or sold. As an animal lover, I couldn’t help but pet the pigs. The children were baffled and amused by my apparent affection for their dinner. Almost 70 children live at the school during term time, and Rwanda Aid works with the town authorities to find their families and re-integrate them so that they can live at home during the holidays.

Most kids are back at home within six months, whereas those educated at the Nguino Nawe Centre for Disabled Children usually go back to their parents after a number of years. Unlike in the UK, children with all different disabilities live together. Those who are only able-bodied help those who are only able-minded, and vice versa. All the children were alike in their determination to include me in their ball game, showing me again and again just how easy it is to bounce a colourful ping-pong ball around your legs while walking. They were admirably patient with my total lack of hand-eye coordination, but ultimately decided I was a lost cause. Instead, I was invited to play ‘house’ with some younger kids. While a little girl poured out imaginary stew from an enormous pot, I was given the doll to look after. It was wrapped in striking patterned fabrics matching the young mother’s headdress. It amused me to remember playing a British version of the same universal game, with plastic fish and chips, a miniature iron and a white doll.

The kids in Rwanda are far more resourceful, as ready-made toys are nowhere to be seen. Instead of placing differently shaped blocks in corresponding holes, they match old bottle caps onto colourful circles. When there isn’t a football, they’ll make one out of surgical gloves and string. A wooden bicycle is a real social status symbol.

The Rwandan resourcefulness stays with them through life. Many of the people I met seemed only to own the clothes they were standing up in, but they style their image meticulously. Even in the height of summer, there is a fashion for wearing a woolly bobble hat on the very top of one’s head, with the bobble flopped over to the front. I met a young fisherman dressed like this while we spent the morning filming the goings-on by the lake. We arrived at the water thinking we were the voyeurs, but the fishermen soon whipped out their mobile phones and started taking photos of us. We stayed with them while they cooked their breakfast – this morning’s catch boiled over an open fire – and made surprising conversational headway between our limited Kinyarwanda and their broken English. People say a smile is understood in every language, but I’d like to add that the word ‘Whatsapp’ will get you almost as far. I’m now the proud owner of some of the photos taken that morning.

That afternoon, the film crew split in two. I was part of the team that went to the Teacher Training College. We arrived to find enough bunk-beds, mattresses, and schoolbooks for 142 trainees strewn about on the lawn. ‘Bird-bergs’, explained the director as he shook his head despondently. The camerawoman and I solemnly nodded our understanding. It was only later when he fantasised about being able to afford ‘metal bunk-birds’ that the truth dawned on us; not ‘bird-bergs’ but ‘bed-bugs’.

That evening, the rest of the crew arrived home after we did, exhausted, and armed with beers. Their eyes lit up when they noticed a big pot of something delicious bubbling away on the stove, until they lifted the lid to find Soup à la Sterilised Cargo Trousers. Their eyes fell, and they settled for cramming their beers in the freezer between our backpacks and our shoes. It bucketed with rain that night, and every night for the rest of the trip. We relished the drama of the crashing rain, and when we poked our heads out to feel the elements we were thoroughly disappointed to find that this tropical storm was really just light shower exaggerated by our tin roof.

The next day we took crossed Lake Kivu to Nkombo Island. Although it’s only 700m away from the mainland, the standard of living on this small island makes it feel worlds away from Kamembe. By this point in the trip, I was acclimatised to the dust and bustle of the city streets, and had almost abandoned my old idea of poverty as the remnant of an out-dated Oxfam advert. Arriving on Nkombo Island, I realised that the poster-image of a child, barely bigger than the baby on her back, walking home in rags, isn’t nearly as out-dated or exaggerated as I had hoped. Only a few hours from the development in Kigali, we watched while delighted kids showed us how they played hopscotch in the dirt. They take great pride in their education, always greeting us with ‘Good morning!’. Being too young to understand the meaning of their rote-learnt English, many would always speak in the plural. When I asked a little boy ‘How are you?’, he gleefully replied, ‘We are very well thank you, Teacher’.

Walking from the shore up to a Vocational Training College, we passed through confused villages straddling the old and new. In an effort to keep those with money and skills on the island, the government recently provided the Nkombo residents with electricity and phone lines. But, the mud huts were already up, and since no one could afford to build more modern houses, electricity was installed in the huts. The mind boggles at the course of events that can lead someone to have a satellite dish, but no windows.

The College sets the groundwork for Rwanda Aid’s enterprise scheme. People are taught skills, and the charity will lend them the money to buy the sewing machine, oven, or boat that will enable them to provide for themselves. Many will leave the dusty paths of the island to make their fortunes in the city, where people drink Coca-Cola and wear jeans. But, that culture is on its way to the island too, and it’s hard not to be patronising and sad about that change. It’s easy to romanticise the rural way of life, forgetting what happens when those beautifully authentic mud houses face the rain without even a tin roof. Nonetheless, it’s possible to progress without Westernising. In spite of the fact that Rwandan pop music is quite dreadful, I was glad to hear more of it than American music playing on people’s radios. The Rwandan government has already begun to learn from our mistakes, having the foresight to ban all plastic bags before people get a taste for them. One hopes the government will continue to appreciate the rare opportunity their country has to progress, rather than just to develop.