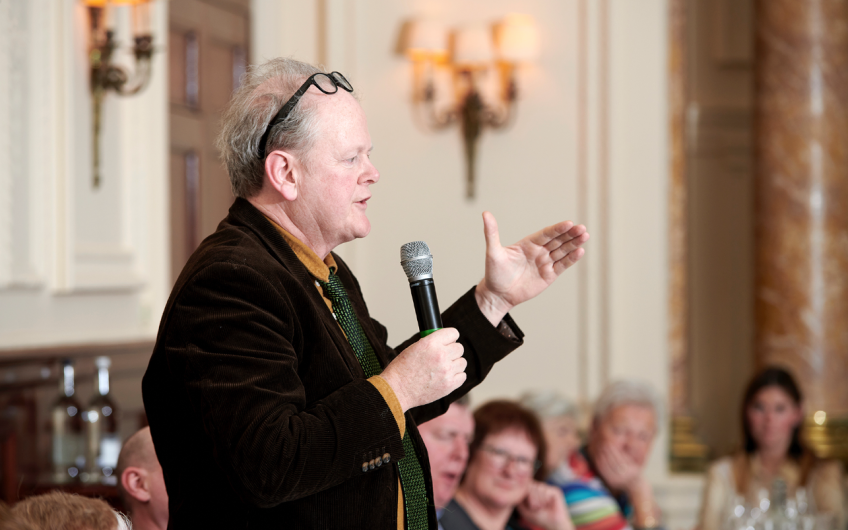 It was at the lunch on Tuesday, at our regular haunt, Simpson's-in-the-Strand, where Norman Tebbit was outed as a comic and captured engrossed in the antics of rival Shirley Williams in her half-page profile in the latest Oldie magazine (pictured below). Baroness Williams was one of our Oldies of the Year – as our Political Legend, whose ‘commanding intelligence’ and ‘indomitable spirit’ were praised.

Our editor, Harry Mount, also revealed that Basil Brush – who last week was awarded our 21st Century Fox of the Year prize – had landed himself a new gig: ‘I don’t think it’s any coincidence that Basil Brush will be presenting the new series of The Generation Game after winning an Oldie of the Year award. If, next week, you find that my friend and neighbour at lunch Lord Tebbit is presenting Strictly Come Dancing – it’s entirely thanks to The Oldie.’

Craig Brown, a great friend of the Oldie, set the pace with a little audience participation – ‘If you would say after me, “air”, “hair”, “lair” – now say all three’.

This became ‘Ah, hellair!’ – a greeting at the extreme end of RP pronunciation. This perfectly set the tone for Craig Brown’s talk on Ma’am Darling, which he described as a ‘mosaic’ of a book with anecdotes chipped in from all parts of Princess Margaret's life – rather than a chronological study.

On the point of poshness, Craig observed that the Queen’s voice has changed over time – whereas Princess Margaret's voice didn't. Craig put this down to her belief in her own standing – ‘A belief that was reinforced the more her standing went down’.

‘At birth, she was fourth in line to the throne. Her birth was attended by the Labour Home Secretary, and Princess Margaret – as she was for the rest of her life – was late for the occasion. He had to be near the Queen Mother’s bedside for two weeks – and this is the Home Secretary.’

Her birth was a ceremony of great pomp – 4,000 villagers gathered at Glamis Castle in Scotland, led by a pipe band, the bells of Westminster Abbey and St Paul’s were rung, and there were forty-one-gun salutes.

‘In 1936, she went up one place with the death of her grandfather, and up another with the death of her father – so she got to "number two in the charts" as it were – but then she began sinking with the births of Prince Charles, Princess Anne, Princes Edward and Andrew. So, by the time she died, she was number eleven – behind Zara. And, if she was alive today, she’d be number seventeen, behind Mia Tindall.’

Craig explained that she would almost always say the wrong, rather than the right thing – ‘like a pantomime version of her sister’.

He put this down to her mixing with witty figures such as Gore Vidal and Roy Strong who could tell jokes and be ironic, and she thought she could do the same – 'except she didn’t do the jokes; she just did the rudeness’.

‘The more she drank, the more imperious she would get – whereas most people begin to relax. People would start to call her ‘darling’ and she would say, "Don’t address me as that – I’m Your Royal Highness."'

Simon Heffer, who was at the lunch to talk about his book The Age of Decadence: Britain 1880 to 1914, had his own tale of a run-in with Her Royal Highness:

'This all reminds me of an encounter with Princess Margaret nearly forty years ago. She came to have dinner and watch a debate at the Cambridge Union – which I was then a committee member of. The president rang her man of affairs or lady-in-waiting to ask what Her Royal Highness would like to eat. He then realised he’d forgot to ask Princess Margaret’s royal people what she’d have to drink – which you’d think would be a much simpler affair.’

The princess story was the perfect curtain-raiser to Heffer’s book about decadence, lifting the fictional veil of The Forsyte Saga and Downton Abbey over the pre-war period – ‘I’m afraid I’ve written a book that is rather a spoilsport, because I’ve said that it actually wasn’t really like that. The tennis parties, the croquet parties, the tea parties and the cricket matches. At least it wasn’t for 97 per cent of people before the war’.

Norman Tebbit, at 86, was at the lunch to talk about The Game Cook, his only non-political book. He explained that, once he was accepted into the House of Commons in 1970, he became seriously addicted to politics – so much so, his wife began to worry. She suggested he take up some kind of other occupation – this became shooting.

‘I enjoyed it enormously,’ Tebbit explained, 'I could be out in the open air and in great company, seeing these meteorites disguised as food coming towards me.'

When he found that occasionally his mind would wander, he came up with an excellent trick to renew concentration: 'I gave the birds names as they flew towards me. I promise it works. Last week I shot Jeremy Corbyn – twice.’