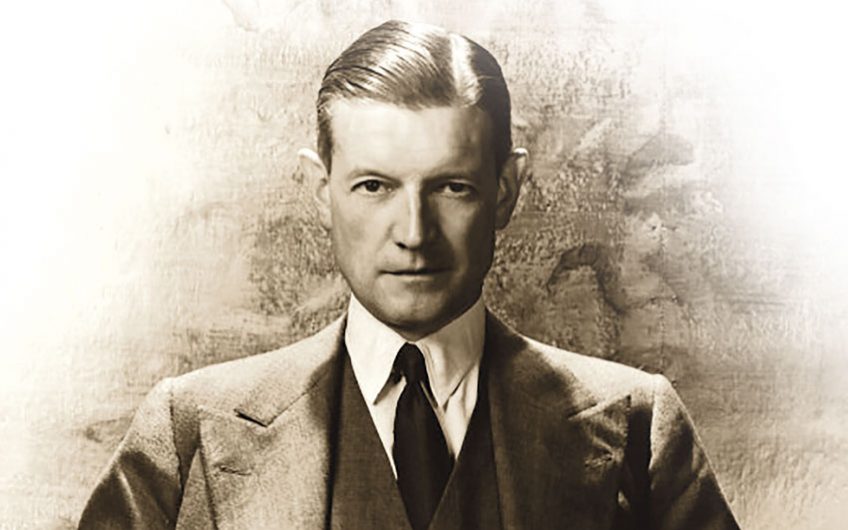 Georgia Channon’s grandfather wrote horrible things in his diaries but she still wanted them to be published, warts and all

Both my grandfathers had nicknames.

My father’s father, Henry Channon, was called Chips. It is a mystery why he was given this nickname. Did he once live with a Mr Fish at Oxford? Or was he the first person to introduce potato chips or crisps to London? Who knows?

My mother’s father, Richard Wyndham, was nicknamed Whips. Unfortunately, we do know why he was called that. He loved whipping ladies. However, according to his brother, Francis Wyndham, he always whipped the ladies gently, so as not to hurt them, Usually they enjoyed it, regularly returning for more.

Richard ‘Whips’ Wyndham was a terrible father. He was a talented painter and writer and he travelled the globe, being both. He fought at Ypres in 1914 and never really recovered from it. After the war, even when painting or drinking in the Gargoyle Club, he always seemed restless, as if he was continually searching for or possibly running from something. He died in 1948 in Jerusalem, where he was a war correspondent for the Times. He often wore Arab dress and was mistakenly shot dead, aged 52.

He hardly knew his two children. He once chatted with one of them at a party without realising she was his daughter. His eldest child was the writer, Joan Wyndham. His younger daughter from a different marriage was my mother, Ingrid. My mother’s mother, a Norwegian model named Greta Wulfsberg, was an equally neglectful parent and Ingrid was brought up by her aunt, Violet Wyndham.

Chips, in contrast, was totally devoted to my father, Paul Channon (1935-2007), later Conservative MP for Southend West for 38 years and Transport Secretary. He was devastated when, in June 1940, Paul was sent to America to escape the bombing in Britain. My father was four when he and Nanny crossed the Atlantic by boat to New York, where he stayed with the Astors. He told me that he was taken to the White House to visit President Roosevelt. He remembered being delighted because Nanny had to be frisked by security guards. He said that the President asked him if he could sing the national anthem and he sang ‘God Save the King’ and Roosevelt roared with laughter.

Chips, meanwhile, missed my father dreadfully. It was in the early war years, recorded in the newly published Volume 2 of the diaries, that Chips and my grandmother, Honor Guinness, saw their relationship disintegrate.

Honor was a strong-willed woman who loved sport and new, exciting projects. It is easy to see why she became bored by Chips’s cycle of drinks, dinners and weekends. She studied Greek at Oxford and, in 1958, she and her sisters financed and oversaw the building of the Cipriani Hotel in Venice. She owned racehorses, helped design and build a small yacht and, in her early sixties, she bought the first plot of land on Mustique. She was brave and independent – but she was not maternal. Chips got custody and brought up my father.

Publishing the unexpurgated edition of Chips’s diaries has been a fascinating but complicated project. Some of the diaries were written in spidery handwriting in hardback exercise books; some on flimsy foolscap paper. Some paragraphs were scribbled out by Chips’s boyfriend, Peter Coats. A number of the diaries were stolen and later found in a car-boot sale and sold back to my father.

Chips’s writing needs hardly any correction. His grammar, spelling and punctuation are consistently good. It seems inevitable that he must have been blind drunk when he wrote some of it. But there is never much apparent difference between his drunk and his sober writing. The language doesn’t seem to change or get overblown when he writes after a long lunch or a big party.

The original publication of the diaries was heavily redacted for many reasons. My father didn’t want to offend anyone who was still alive. This included Honor. The terrible break-up of their marriage is hardly referred to in the early edition, for obvious reasons. Honor was also concerned that my father’s political career might be damaged by some of the content. The writing concerning Chips’s sexuality and ‘marriage’ to Peter Coats was also severely cut and Chips’s pro-German views were toned down.

For this latest publication, we handed editorial control to Simon Heffer, who has done an outstanding job. The reviews of the diaries have been incredible and I hope that some of the diaries’ content may contribute to history.

The comments about Chips’s character have not been so good. This is understandable as some of the things he writes are unacceptable: he is seen as a snob and a social climber; he makes antisemitic and racist remarks; and, until war breaks out, he thinks Germany and the Nazis are going to save everyone from the Communists.

I personally was nervous about the inclusion of some of these abhorrent thoughts. However, the very wise Simon Heffer explained that we cannot, or at least we should not, try to rewrite history. We cannot pretend that these views didn’t exist or weren’t expressed. That would be deceitful and insulting.

Although I wanted to protect Chips from the reaction to these views, I knew that later he realised how wrong he had been about Nazi Germany. He became great friends with members of the Jewish community such as Leslie Hore-Belisha and the Amery family. I saw that Simon was entirely correct: we had to be honest.

So we published Chips’s innermost thoughts, warts and all. Many of them were superficial and society-obsessed and some of them were just plain repulsive. Those are the bald, ugly facts. But they are not the only facts. Chips was more than that. Chips was not a monster – he was a flawed character who, at some points in his life, held some monstrous views.

Chips was not just a superficial snob. He was properly loved by many people. He was a staunchly loyal friend. He had profound, lifelong friendships, not society acquaintances that faded away with time. He was kind and generous, helping those whom others had ostracised. He was witty and wonderfully wicked and he was fun, but he also worked hard in his constituency (Southend and then Southend West, which he represented until his death in 1958, aged 61), unlike many MPs of the time. He was passionate about writing and had three books published, with The Ludwigs of Bavaria (1933) receiving very good reviews.

But perhaps most important of all to me was the fact that he was an exceptional father – certainly not a given in those times. He simply adored Paul and, from when Paul was young, Chips and Peter took him everywhere with them, to galleries, dinners and the theatre. When they had weekends at Kelvedon, Chips’s Essex home, the young Paul was always included and would play bridge and mingle with the great and the good and the not so good.

Gore Vidal once said, ‘If that boy isn’t gay, I will eat my hat.’

A friend’s father told me that, in 1956, he and my father were posted to Cyprus to complete their National Service. Their train left at five in the morning and the only parent waving off their son from the platform was Chips. There is no doubt in my mind that, throughout his childhood and up to Chips’s death, my father felt nothing but kindness, love and support from him.

You don’t choose your family. Clearly, there are aspects of Chips’s character that I cannot condone. But the fact that he was such an unusually warm, ‘hands-on’ father, who helped mould the wonderful, kind, honourable man who was my dad, makes me proud.