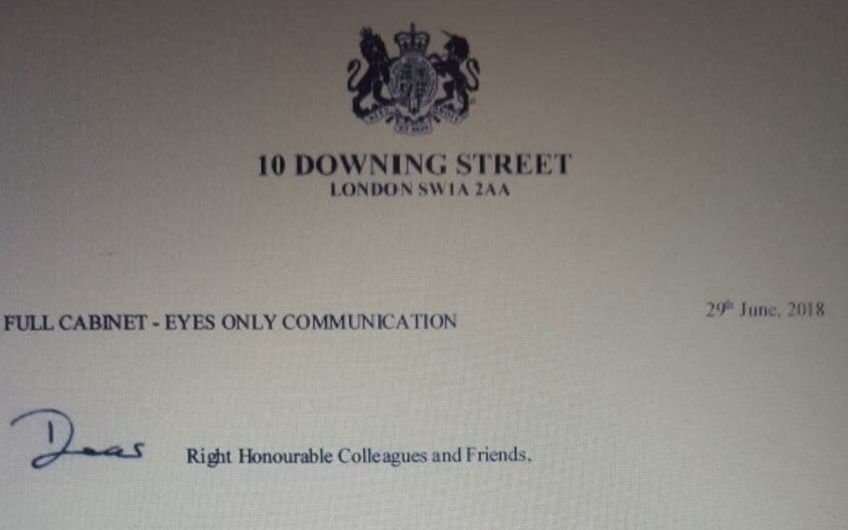 At the end of last week, we, at Oldie Towers, received a document that might cause some distress to Brexiteers – a letter allegedly signed by Theresa May, announcing a second referendum, on the terms of Brexit, in October this year.

But hold your horses. It looks a little too convenient, doesn’t it? The document contains, among other things, a reference to business fears about the impact of Brexit (not to mention the subsequent loss of £30 billion in tax revenue), an unnecessary Chinese proverb, and an – all-but total – admission that Labour will win the election in 2022, if the government does not have a second referendum.

A cocktail of protecting big money, betraying ‘the will of the people’, cynical self-interest, a government cowering before its opposition, and prime-ministerial pretentiousness… what we have here is a 21st-century Zinoviev letter.

The Zinoviev letter was a forgery published by the Daily Mail, four days before the 1924 general election. The letter, supposedly sent by Grigori Zinoviev, chairman of the Comintern (the international communist organisation that advocated global revolution) to Arthur McManus, one of the British representatives on the committee. The letter overtly encouraged British communists and sympathetic elements within the Labour Party to sign a proposed Anglo-Soviet Pact, lend money to the Soviet Union, and prepare the working classes for military insurrection. The threat of full-blown communist agitations, directly after the Red Scare, was aimed at a public inclined to paranoia by political tension.

In the end, it was proved to be a forgery, but not before the minority Labour government was ousted. The letter's effect on the election was unclear: the Tory vote may have risen, but at the cost of the Liberals – who were all but annihilated – not Labour, whose vote rose by one million. In 1999, a study showed it was likely that the letter was forged by White Russians, with contacts in both London and Russia, and almost certainly leaked by MI6 to the Conservative Party and the Daily Mail. The finger has been pointed at various people among MI6, most notably Churchill’s future aide and friend, Desmond Morton. There is also evidence suggesting that a cabal of incestuous elites allowed it to be leaked, despite knowing it was a forgery.

Back in the present day, there is no way for us to know the true origin of our document. I received it third-hand from a friend. It’s almost certainly a hoax. If the Prime Minister did sign it, it was pretty foolish – but then it wouldn’t be the first time she’d done something misguided.