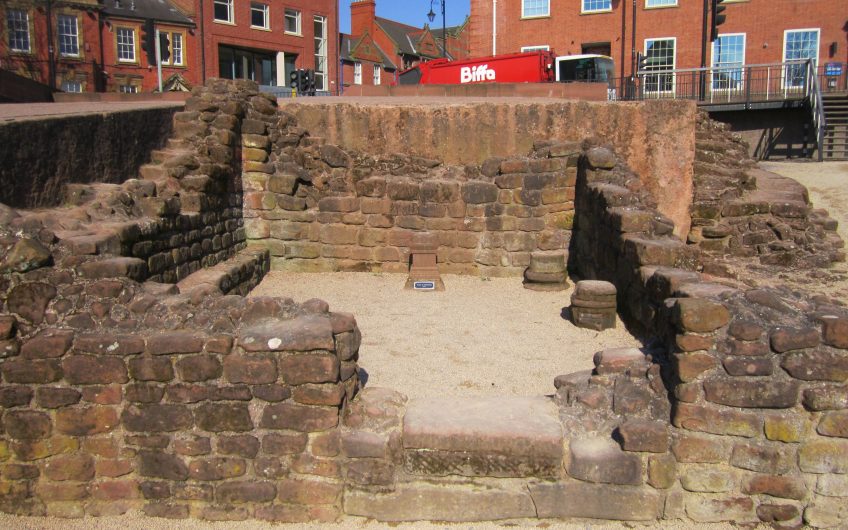 As part of Chester's Roman wall collapses, Harry Mount tours Chester - or Deva, as the Romans called it

My God, the Romans were good town planners.

Chester's street pattern still follows the grid pattern of the ancient fortress city. And much of the old, rectangular fourth century wall of Chester - Deva, as the Romans called it - survives, topped off with medieval repairs. Sadly this week, a property developer managed to bring down a small section of the Roman wall.

What a delight to stroll along the top of the surviving Roman wall, which runs practically all the way around Chester. From this elevated, largely empty walkway, you get a thrilling, semi-aerial perspective. Never have I seen the dark pink, white-veined stone buildings of Chester Cathedral - the refectory, cloisters, nave and choir - click so happily into place; although I was too far away to make out the little gargoyles of Gladstone and Disraeli on the cathedral's Victorianised south transept. The cathedral's 13th century refectory is an apt spot for lunch - the delicate, high-ceilinged Gothic hall is where the monks used to eat.

From the Eastgate bridge, I looked down Watergate Street to the Welsh hills beyond the city edges. Even the multi-storey carpark of the Grosvenor Shopping Centre looks original when you find yourself staring into the surprised faces of drivers parking 15 feet off the ground.

Almost 2,000 years after the Roman governor, Frontinus, built his fortress on the banks of the River Dee to keep the north Welsh at bay, the Roman town-planners - and the Roman walls - are still successfully fighting off modern developers. Even the 1960s wreckers couldn't find a way to get their flyovers and ring roads inside the old walls. As you walk those walls, you see horrible tower blocks dotted around the Chester suburbs - but they never made it past Deva's mighty fortifications.

And so Chester survives as one of Britain's prettiest - and most historically gripping - towns. There are Roman chunks all over the place: the sandstone hypocaust pillars from the fortress sudatorium, or sauna; column bases from the old palaestra, or gym. Most exciting of all, just outside the city walls, is the amphitheatre, the biggest known in Roman Britain, with 7,000 spectators, begun soon after 80AD.

In one of those accidental collisions which spark urban beauty, the amphitheatre practically touches the rough-hewn walls of St John Baptist, an enchanting Norman church which was Chester's cathedral until Henry VIII decreed that the cathedral should be inside the city walls, where it remains today.

Lots of British cities are, like Chester, a sandwich of history. But Chester had a particularly rich sandwich layer added in the 19th century by its great benefactor family, the Grosvenors; as in the Dukes of Westminster, whose seat - Eaton Hall, once a high-Victorian schloss, then a 1960s modernist shocker, now a 90s mock château - is a few miles south of Chester. The Sixth Duke, who died last August, had his memorial service in Chester Cathedral.

Everywhere you look around Chester, you see the ducal presence: in the Grosvenor Bridge over the Dee, Grosvenor Park and the Chester Grosvenor Hotel.

And it was, confusingly, a 19th century Duke of Westminster who gave Chester much of its half-timbered, ancient look, particularly in the Rows - the surpassingly lovely crossroads of shopping streets in the middle of Chester.

Who cares if they're fakes? I didn't - nor did the dozens of Japanese tourists flooding down Watergate Street and delighting in the spirit of Ye Olde England. In fact, thanks to the bottomless pockets of the Grosvenors, and the Victorian craftsmanship of TM Penson, TM Lockwood and John Douglas, the fakes are on a much greater scale - and with more sophisticated timber designs - than the originals.

There's more to the Rows than mock Tudor woodwork. Their chief, ingenious delight are the raised colonnades that run at first-floor level from shop to shop for hundreds of yards at once. They are a stroke of genius by medieval town-planners - inspired perhaps by those raised Roman walkways. Suddenly, you have another two elevated shopping streets, either side of the High Street, to take the pressure off the Saturday afternoon crush. What's more, the shops also have subterranean crypts to provide even more retail space.

No one quite knows the reason for the Rows' design. Some put it down to the old Norman - and Italian Renaissance - idea of keeping your grandest, biggest rooms on the first floor, or the piano nobile - 'the noble floor'. Others relate it to the medieval tradition of walled, Continental towns like Padua or Innsbruck. Whatever the reason, it works like a dream - and never has dense commercial development been such sheer fun.

For lunch, dinner, a drink, or a hotel room near the Rows, try the Pied Bull - a 16th century coaching inn on Northgate Street. It's popular with tourists - but there are so many old, picturesque bars and restaurants in Chester that the Pied Bull doesn't have a monopoly on tourism; ie it's still a real place.

Not everything about the Rows is ideal. The architectural beauty and those-brilliantly designed shops have attracted not just shoppers and tourists - but also buskers on a constantly-revolving basis. Their heavily-amplified playing overlaps with and intensifies the noise of their neighbours.

At the Cross, where the Rows, and Chester's two main Roman streets, meet, I could hear: a saxophonist playing Sting's Fields of Gold; an automated dummy drumming the accompaniment to Georgia On My Mind; a folk singer channelling Bob Dylan in a West Country burr; and a keen ginger youth singing his heart out, with maximum vibrato, to a transfixed crowd of one - his girlfriend.

If Chester's buskers could belt up, or just sing unamplified a capella, they could perfect a city that is already exceptional.

Harry Mount is author of How England Made the English (Viking)