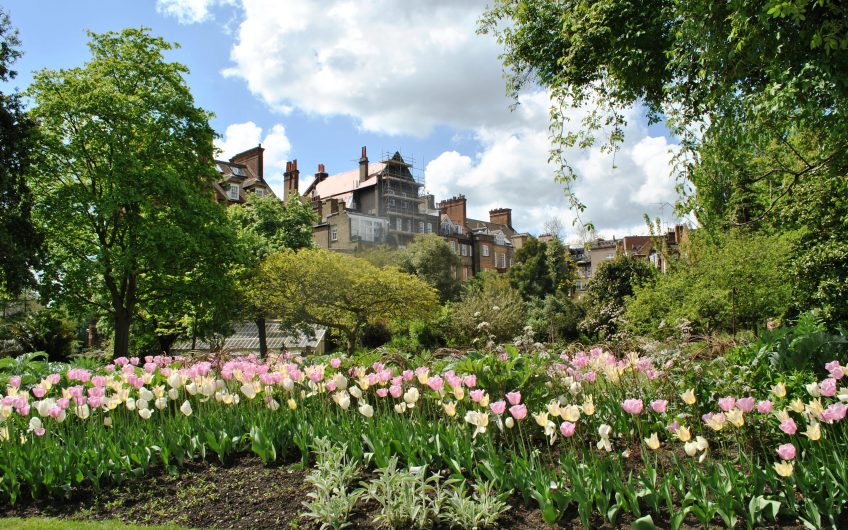 The first garden I ever truly appreciated was cultivated by a venerable lady in our village, incredibly named Grace Hedger, who had the most spectacular cottage garden I have ever known.

The hidden pathways wound through the head-height flower beds leading to charming flagstoned citadels, mossy hideaways, and deep, sacred, green-black pools of water. Among the beds, bees would make violent love to flowers, dragonflies would terrorise frogs, and the occasional grass snake would leave us spellbound as it lazily sloped off, apparently unaware of our stupefied reverence.

But the memory of the garden which most keenly pursues me was its pressing sense of life. The lawn, surrounded as it was by foxglove, alliums, roses and a crumbling 18th century wall, was the site of a modest tennis court, at times civilised, at others, as when the grown-ups competed, comparable to the fields of Naseby. I’ve always felt strongly that gardens are to be enjoyed and so it was armed with this belief that I began attending supper clubs at the Chelsea Physic Garden.

The Physic Garden is four acres of paradise crammed with 5,000 plants which rests on the bank of the Thames between the Royal Hospital Chelsea on the East, and Albert Bridge to the West. Founded in 1673, it is the oldest botanic garden in London, narrowly missing the title of the UK’s oldest, having been beaten by Oxford (1621), but ancient by comparison to Kew (1759) and Cambridge (1762).

The Worshipful Company of Apothecaries chose the site because of its ease of access by barge, its light soil, warm air currents, and, in a stunning display of foresight, its proximity to the Restaurant Gordon Ramsay. An impressive pair of iron gates proudly adorn Chelsea Embankment but today the garden’s entrance is an unassuming opening on Swan Walk.

I like to scrunch my way down the wide gravel pathway straight to the centre of the garden and start from there, touching the buckled shoe of the statue of Sir Hans Sloane as pilgrims do the foot St Peter in the Vatican.

From there I head to the Victorian glasshouses, careful not to stumble on the Pond Rockery; this miniature mountain range is Grade II listed and thought to be the oldest rock garden in Europe. Travelling down the tropical corridor of the glasshouses I pay homage to plants from across the globe which have been cultivated here for centuries. Still high on the redolence of the Garden of Medicinal Plants, I turn a corner and am suddenly confronted by an amphitheatre which overlooks the new Garden of Useful Plants.

While a walk across its lawns and along its pathways can feel like time travel, there is a vibrant sense of life in the air. The Trustees and garden staff have preserved the garden’s botanical integrity but they have also innovated, giving the garden a life beyond the fragrant stillness of a summer’s afternoon or the electricity of a crisp autumn’s morn.

Along with garden parties, and music on the lawn are my favourite events, the late supper clubs. On these empyreal evenings, chefs from around the country lay up sumptuous feasts out on the lawn. I believe that there are few better ways to enjoy a garden, or indeed life, than in good company and with good vino.

Upon arrival, one is greeted with an aperitivo and encouraged to wander around, taking in the historic beds before sitting down to dinner. The atmosphere is intoxicating, the fellowship jovial. Each know themselves to be party to something remarkable. Sitting at table on a evening I think of the words of Francis Bacon, ‘God Almighty first planted a garden. And indeed, it is the purest of human pleasures.’

When it comes to the charm and joy of this garden, these suppers are the tip of the iceberg. Its appeal is far further reaching than a quasi-bacchanalian midsummer night’s dream. Its quiddity has called to people throughout the centuries.

The Physic Garden’s great patron and benefactor was Sir Hans Sloane, whose other little project was the British Museum, but other benefactors include the friends taking tea together who have visited the garden for over 50 years, sleep deprived parents catching a moment’s calm as their toddler makes a break for the freedom of the Systematic Order Beds, a young couple sitting portentously by Fortune’s Tank. Though anyone who has squelched their way through those hallowed grounds knows that they are rather beneficiaries than benefactors.

Unlike many other botanic gardens, the Chelsea Physic Garden is not run by a University and you can tell. It’s a garden which is, above all, enjoyed and lived in. That said, the walls are as alive with learning as any Cambridge cloister or Oxford quad. Their have a fantastic education programme with material which appeals to amateurs and professionals, children and much older children.

But a stroll around this botanical burg will teach you more than you could quantify. There is peace and beauty here which oxygenates the soul, clears the mind and stimulates the imagination. As Einstein said ‘Look deep into nature, and you will understand everything better.’ It may not have the footfall or funding of its brother in Bloomsbury but what it preserves and cultivates is no less important. Gardens in cities are places of life like no other. They are fortresses of inutility, ‘progress’ has not paved them over, they are bastions of civilisation...

Gardens like the Chelsea Physic are worth their weight in gold at the best of times, but during lockdown they shine out for what they really are, priceless jewels. Throughout the country from the riotous glory of Great Dixter in Sussex, across to cottage grandeur of Hidcote Manor and the towering monuments of Westonbirt Arboretum in Gloucestershire, up to the formal topiary of Levens Hall in Cumbria, perhaps with a stop at the charming Bishop’s Gardens in Norwich, this green and pleasant land is bursting with life.

Many of these living works of art are free to visit, but now more than ever it’s worth supporting them. Monet, a man with an eye for beauty, said that his garden was his most beautiful masterpiece. I say that our gardens are small glimpses of heaven in a world of bricks, mortar, concrete and glass.

The Chelsea Physic Garden and many others are open in lockdown, a recognition of the much needed, nay essential, relief they provide from the tyranny of emails, online meetings, and the leering menace of four walls. In a world of virtual and harsh reality, they are a momentary flash of authentic beauty.