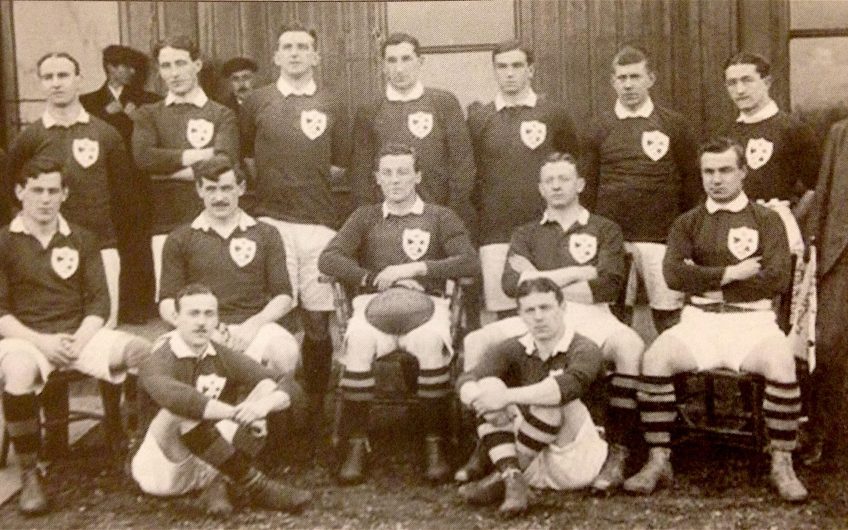 When it comes to the Six Nations, in recent years the fixtures guys have done well making sure the final weekend sees the big deciders. Tomorrow's England-Ireland showdown – on St Patrick's Day! – should be no exception. The Irish have already won the championship;  but now they hope to win the Triple Crown, and claim the Grand Slam for just the third time since the tournament began.

The English will be out to stop that happening. Ireland thumped the champions last year in the final game, denying them the clean sweep (just as they had in 2001 and again in 2011), and this year England's quest for a third consecutive Six Nations championship was brought to an early and embarrassing halt – so a bit of reciprocal spoiling is to be expected. (It's mutual. An Ulster friend sent round a chart two weeks ago, explaining how the English might yet come last.)

I have a little skin in the game. Or blood, at least. My great-grandfather, James 'Jim' Sealy played this very fixture in 1896, and scored a try – on his debut.

Reporting on 'A Splendid and Exciting Game', the (English) Athletic News laments how from the off the English 'had a terribly warm time defending... and the wild, energetic rushes of the Irishmen were too much for the phlegmatic Englishmen’. Penalties were missed and 'scrummaging of a loose and scrambling character was indulged in'. Before half-time, however, 'the Fates smiled upon their [Irish] efforts... when Lee dashed along to the English line, and handing to Sealy at the right moment, gave that youth the opportunity of scoring a try near the posts’. The English rallied in the second half, but somehow managed to run their only try into the dead-ball area. And so it was that Ireland won 'a brilliant victory by the following score: Ireland 2 goals (10 points) – England 1 dropped goal (4 points)'. The 'Critical Comments' that followed might be classed as poetry.

That year, the Irish did not crack the Triple Crown. They drew with Scotland, 0-0, two weeks later.

A Dubliner born and bred, and captain of the Dublin University team (1898-99), my father's grandad on his mother's side played eight more times for Ireland from 1896 to 1900 (W5, L2, D2), during which time the Irish won outright two of three completed championships.

And though the Grand Slam per se did not exist until the French joined, the Triple Crown – for beating all the other Home nations – was the equivalent achievement. Ireland won it, for the second time in five years, in 1899, James Sealy helping to defeat Wales in the last fixture, in front of an uncontrollable 40,000 crowd at Cardiff Arms Park. In the entire course of their tournament, the Irish had conceded just a single penalty – the first time one had been awarded for tackling a man without the ball.

In his first year as an international, Sealy also joined the British Lions tour of South Africa (W3, L1), playing alongside eight of his fellow Irishmen, including the 'psychopathic' Tom Crean (not the Antarctic explorer) and Robert Johnston, both of whom then chose to remain in the country, as doctors, and both won VCs in the Second Boer War. (Sealy did not stay, but years later sent his daughter Brenda there, to marry my father's father, Gerald Spence Smyth.)

Evidently a man of more than passing sporting talent, aside from prowess on the rugby field, he represented Ireland at hockey, and played golf off a plus-3 handicap. In the summer of 1900 he also played in a three-day game between Dublin University and 'Marylebone Cricket Club in Ireland'.

Presumably at some point Sealy also did a bit of studying. Hanging up his boots, he went on to be a well-regarded barrister, KC and judge. In 1930, the London Times contained a nib to the effect that he'd been presented with a pair of white gloves, 'symbols of the lack of crime in the county'.

Yeats would come round to the family home for tea, as would the first president of Ireland, Douglas Hyde. When his first wife, Stella, died, Sealy – known throughout the family as 'the Da' – married Hyde's daughter Una. All parties, sooner or later, had their portraits done by Sarah Purser, a middle-distant cousin.

In 1928 'Judge Sealy' was elected president of the Irish Rugby Football Union. In the playroom where the young me watched Five Nations matches while my father polished, there is a framed touch judge's flag embroidered 'France vs Ireland'; a minor masterpiece of cockerels and shamrocks. We have one side of it; our surviving uncle has the other. My aunt in Perth, Australia, has the blackthorn stick that it was waved from.

James Sealy lived just long enough to see Ireland win their first Grand Slam, in 1948. As for his playing days, it is established family lore that Sealy did not merely score a run-in try against the English, but that he  'crossed the line, festooned with Saxons'.