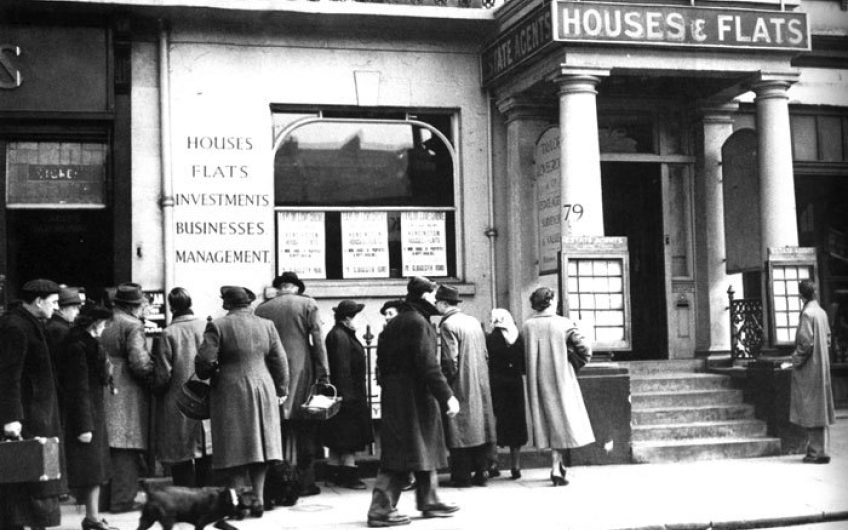 The home of acid bath murderer John Haigh, the basement flat at 79 Gloucester Road, Kensington, became a star attraction for people curious to see where the murders had taken place. The flat has now been renumbered and the Frances King school is now No 77, removing the notorious No 79 from the map completely
View Full Size
1
of 1

One of the best-loved catchphrases in The Goon Show, back in the 1950s, was Minnie Bannister’s ‘We’ll all be murdered in our beds!’ It was an indication of what a rare occurrence murder in Britain was – and, to a great extent, still is – that we could chuckle so merrily at the thought of it. But what is it about the British and murder? Why do we lap up gore with such gusto? Why do we watch fictional murders for entertainment by night and relish, over breakfast, the court reports of the non-fiction ones?

The question is prompted by the publication of a whacking great book called Scenes of Murder Then and Now, which contains on its front cover the cheery come-on: ‘Warning: some images may cause distress’. Inside are photos of the sites – and bodies – of some of the most notorious killings of the past 150 years and what they – the sites, not the bodies – look like today.

‘Murder, the most heinous of crimes, has been the subject of countless books but never before have the scenes of murder been portrayed so comprehensively with “then and now” comparison photographs,’ writes the book’s editor, Winston Ramsey, in his introduction. It’s an odd idea for a book. Do we need to know that the Hampstead pub outside which Ruth Ellis shot dead her lover, David Blakely, in 1955 still looks pretty much the same today? Presumably it is aimed mainly at murder anoraks – or should they be called caghouls? Still, diners at the Patisserie restaurant in Gloucester Road, west London, may be intrigued to know that they are supping in the place where in 1944 John Haigh disposed of his victims in an acid bath after drinking glasses of their blood. Bon appétit! But the book, with its detailed contemporary crime reports and newspaper cuttings, acts as a reminder of many gruesome killings and prompts the question why they are so familiar and why we take such pleasure in reading about them.

‘It is like hearing blustery rain on the windowpane when sitting indoors,’ suggests Judith Flanders in her excellent book The Invention of Murder: How the Victorians Revelled in Death and Detection and Created Modern Crime. She points out that by the nineteenth century, murder was ‘vanishingly rare; by the start of the new century, therefore, a love of blood could be indulged in safely and securely, without any fear of an ugly reality bursting in’.

P D James, in Talking about Detective Fiction, quotes the words of her fellow writer Dorothy L Sayers: ‘Death in particular seems to provide the minds of the Anglo-Saxon race with a greater fund of innocent amusement than any other single subject.’ James points out that Sayers was not talking about ‘the devastating amalgamation of hatred, violence, tragedy and grief which is real-life murder’, but of detective stories. However, the Anglo-Saxon race does seem to be equally fascinated by the real thing.

No surprise that Jack the Ripper features prominently in Scenes of Murder. Any night of the week, should you so wish, you can go on one of the many conducted tours of the places in east London where he stabbed and mutilated his victims in the late 1880s; Whitechapel and Spitalfields residents get fed up with these tours and shout abuse at them. The Ripper is accompanied in the book by a familiar roll-call: Dr Crippen, Haigh and his acid baths, Neville Heath, Christie and 10 Rillington Place, Ruth Ellis. Most of the murderers featured are dead now, although Harry Roberts, one of the gang that shot dead three policemen in west London in 1966, remains in jail; in the Seventies, football crowds used to antagonise police officers at games by singing ‘Harry Roberts, he’s our man/He shoots policemen, Bang! Bang! Bang!’

Few of these cases pass the George Orwell test, as defined in his 1946 essay ‘Decline of the English Murder’, in which he suggested that the most intriguing homicides involved ‘domestic poisoning, product of a stable society where the all-prevailing hypocrisy did at least ensure that crimes as serious as murder should have strong emotions behind them’. Many of the examples he cited ended with the speedy hanging of the guilty party.

Murder trials since the abolition of capital punishment in 1965 have not had quite the same frisson, nor do they attract the same number of column inches. Scenes of Murder contains a facsimile of a 1958 Sunday Pictorial tale, in which Donald Hume, who was wrongly acquitted of the murder of Stanley Setty, boasts: ‘I killed Setty . . . and got away with murder.’ He could make that confession because in those days, under the double jeopardy rules, you could not be tried twice for the same crime; the law was changed in 2005 so that substantial new evidence can now lead to a retrial. The Pictorial paid Hume £2,000 for the story, something that would surely have raised an eyebrow at the Leveson inquiry.

Britain is still pretty far down the hit parade of murderous countries, with an average of two per day, a rate of 1.2 per 100,000 population, just below France on 1.4. Compare this with the US, at 5 per 100,000, Russia on 11.2, Brazil 22, South Africa 33.8 and Jamaica 52.1. Denmark and Sweden, providers of such successful fictional representations of murder as The Killing, The Bridge and The Girl with the Dragon Tattoo, have even lower rates than Britain. The further away from the reality of violent death a country seems to be, the more fascinated it becomes.

The last public hanging in Britain, in Newgate in 1868, attracted a crowd of 20,000. The Times report of the event may give a clue as to whether this fascination is part of the national DNA: ‘There were the usual cat-calls, comic choruses, dances and even mock hymns, till towards two-o-clock, when the gaiety inspired by alcohol faded away as the public houses closed, and popular excitement was not revived till the blackened deal frame which forms the base of the scaffold was drawn out . . . Its arrival was accompanied by a great cheer.’ A hanging for a high-profile murder would surely still draw a crowd today, but where would it be held? Maybe something for those responsible for the ‘legacy’ of the empty Olympic stadiums to consider.