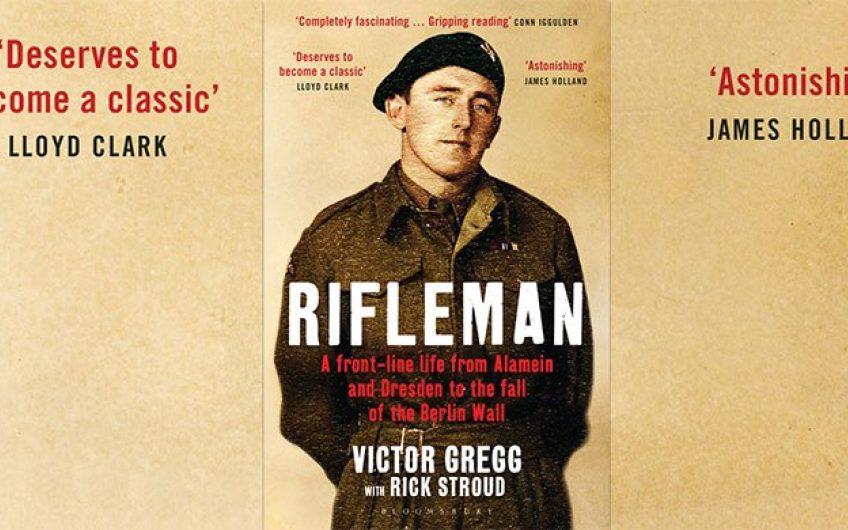 Victor Gregg has died three days short of his 102nd birthday. He fought at El Alamein and Arnhem before being captured and surviving the firebombing of Dresden. By Rick Stroud

I met him twelve years ago when researching a book about the Second World War. Born in 1919 in King’s Cross he was one of three children living in two rooms. He told me ‘you could tell the posh people because they were the ones whose houses had front doors.’ He left school at fourteen and had various menial jobs but his true loves were cars, boxing and music. He knocked around Soho and was fascinated by the criminal world he found there, violent gangs, prostitutes, pimps, villains and bohemians - what he called the ‘arty-crafties’. On his eighteenth birthday Vic met a Rifle Brigade recruiting sergeant in Whitehall and the next day was on a train to Winchester where he was transformed into a soldier, Rifleman Gregg.

Two years later Vic was fighting in the Western Desert. At the battle of Beda Fomm he experienced hand to hand combat. I shall never forget his descriptions of what it was like to kill a man with a bayonet as you stared into his eyes and smelt his breath. He was recruited into ‘Popski’s Private Army’ driving stores to remote outposts driving thousands of miles on his own. Later he spent time with the Long Range Desert Group doing the same thing with wounded men.

Vic fought at the Battle of Alamein and was blown up three times. Then he decided to become a paratrooper and in September 1944 was dropped into Arnhem with the 10th Parachute Regiment. He had been told the battle would be a ‘piece of cake’. Instead, and after ten days' fighting, the battle was lost and Vic was a prisoner. He managed to sabotage a soap factory and was condemned to death. He was taken to Dresden and held with five hundred other men. That night the allies bombed the city, Vic was blown out of the prison and stumbled about surviving the fire storm and the next two raids. He said that he knew all about killing men but nothing had prepared him for the sight of women and children being sucked into the air with their heads on fire. He spent the next week helping find survivors and then fled. The experience haunted Vic for the rest of his life.

Vic’s post war life reads like a cross between The Spy Who Came In From The Cold and the Italian Job. First he worked for the Russian Moscow Narodny Bank driving under-cover agents all over Britain. Soon MI6 were on to him and he was recruited into the shadow world of the double agent. He loved taking his motorbike to rallies behind the Iron Curtain and this became a cover for taking messages across Eastern Europe. While doing all this Vic drove the Number 14 bus in London. His under cover activities came to a climax when, aged 70, he was the guest of honour of the Magyar Democratic Forum in Hungary making the first cut in the barbed wire fence that separated the East from the West. Weeks later the Berlin Wall fell and Vic had played a small but important part in its end.

Vic was a brave man driven by a need for the adrenalin rush of danger and adventure. I helped him write his autobiography Rifleman: A Front Line Life Which was published by Bloomsbury when Vic was 93. Later, we published two more volumes, King’s Cross Kid and Soldier Spy as well as an ebook Dresden a full account of his experiences in the bombing and its aftermath.

Vic was interviewed many times on radio and television. The message that he wanted to leave was that war may sometimes be necessary but it is not the way to solve the world’s problems, and he knew what he was talking about. I am honoured to have been his friend and collaborator. His life is best summed up by the officer who wrote on his discharge papers: During an exceedingly colourful career this Rifleman has served long and continuous periods in active operations with front line units. He is an individual of great courage, capable of applying himself best to a task when the need is greatest.

I shall miss him.