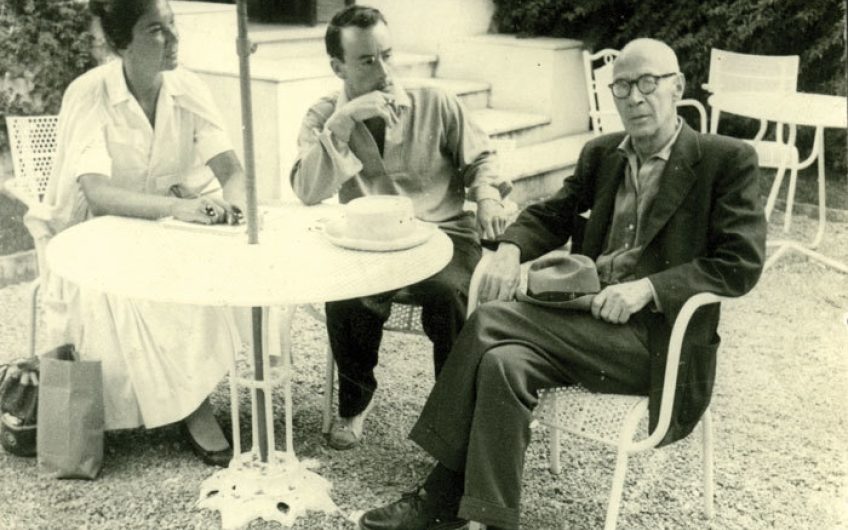 The Riviera was sweating in a midday temperature in the nineties. Like most of the beaches in Juan-les-Pins, the Pinède Plage was private; it was the pride of its owner, who kept it immaculate, with its deckchairs and ‘gondolys’ for hire, the little restaurant run by his wife, and the table-tennis table, which sat in the full sun.

I was sharing a bottle of wine in the shade when an old man came into view, regarded the table-tennis table, picked up a bat, and tested its feel in his hand. He wore a blue denim shirt and his years gracefully, as if he were a man of thirty; his jeans were kept in place by a huge belt with a buckle the size of a small plate, gleaming with stones the colour of the Mediterranean.

He asked me if I would care for a game of ‘ping-pong’. ‘Sure,’ I said, thinking that it was unlikely to be much of an effort – but he quickly had me exhausted, and after his concluding smash I sat gratefully back into my chair.

Carefully putting the bats away, he came over to join us in a glass of wine. It would be the start of a week in which we did little but play, eat, drink and talk.

He had introduced himself as Henry. The following evening I was talking to Diane, a French friend.

To an aspiring young journalist working on the Daily Express in Manchester, this seemed the chance of a lifetime – and at the end of the week he said ‘We’ve had a great time talking.

‘Of course. But you don’t like talking to journalists, and I’d never have asked. We’re on holiday, and I think we’ve become friends.’

‘Sure. But if you write down everything you can remember of what we’ve talked about, and show it to me, you may publish it.’

This was a scoop indeed. The Lady Chatterley trial had finished the previous November. Everyone wanted to interview Henry Miller, whose Tropic of Cancer and Tropic of Capricorn had set new standards for literary forthrightness. Yet here he was, presented on a plate, and he seemed totally different to what one imagined – kind, gentle, never dogmatic, interested as well as interesting. After a week of conversation, my memory would have to work overtime.

‘The world is governed by too many old men,’ he had said, his own age apparently irrelevant. ‘I would put most of them on the chopping block. What we need now is youth, adventure, people who will take risks.’

Slim, his balding head fringed with soft grey hair, he seemed to grow younger as he spoke. After lighting a cigarette, he would move on to a new subject – the favourite one being painting.

‘I paint in watercolours, y’know. The greatest relaxation I’ve found. But never from sight; I just let the hands do the work instead of the brain. I had two shows in London, and sold three paintings. I think those sales were on account of my books; my best admirers come from the world of painting – they seem

Referring to his home in California, he liked to think of himself as the Hieronymus Bosch of Big Sur. ‘Painting is like writing. You mustn’t work everything out in fine detail; you must just let yourself go in the medium. I started when I was in New York, and very poor. A friend and I saw some English watercolour reproductions being sold in a department store window. We bought a box of children’s paints, and we painted and painted. We had nothing else to do, and when we sold a few pictures we could eat.’

That evening, in a lively bistro near the Casino, among the hubbub of promenading English and cruising open-top Cadillacs, we met for coffee and beer. Diane was with us, so he spoke in French, with a broad American accent, but precise and exact.

His next big topic was religion.

‘I am a religious man, but I am against religions. I believe in a god, but a god who must be something totally apart and incomprehensible to us. My favourite religion is Zen Buddhism, because it is not confined, and is truly a philosophy.’

All Henry’s sentences seemed to end in a speculative ‘hmmmm’, like a dynamo recharging – or perhaps to give himself time to consider what he had just said, in case it needed amendment. One never felt that his views were in any way static.

He combined a religious sense with a fervent belief in the mystical – the occult, astrology, palmistry.

‘Many seers have read my hands, the back of my head, my eyes. What they said has always tallied with the others, and with what has happened.’

‘What if they foretell bad things?’

‘I will continue just the same. What’s the use of banging your head against a brick wall? Sooner or later you’re bound to find a door. There’s a difference between a man’s destiny and his fate. He can shape his own destiny; about his fate he can do nothing.’

Didn’t it disappoint him that most people had only read his notorious ‘Tropics’?

‘Not really. It was with them that I made my literary debut. I shouldn’t complain. But I have written better. I take between six months and a year to write a book – I write for about three hours a day, and the rest is taken up with reading and ping-pong. My best book? I don’t know, but the one I’d like you to read is The Colossus of Maroussi. It’s about a man who lives in a village near Athens. I made him into a Colossus. Hmmm.’

When you were with Miller you forgot his reputation – he made you forget, listening to what others had to say with as much attention as he gave to his own remarks. He was modest, but in a peculiar way; facts were facts, and needed no embroidery.

His quiet appetite for life was remarkable. He was a keen diver and swimmer, but an accident had pierced his eardrums. At the age of sixty-eight, he was about to have an operation so that he could swim again.

After our last conversation, he got up, wished us ‘à demain’ and walked quietly away. The following day he was leaving for Milan to stay with his Italian publisher, Feltrinelli, who had installed a table-tennis table.

Before Henry left for Milan, I sent my piece to the Features Department at the Daily Express office in London. Every day for the rest of my holiday I bought the paper, but there was not a sign of my first ‘world’ scoop. Back in Manchester, I phoned the Features Editor in London, and explained that I had sent him a piece on Henry Miller.

‘But it’s a world exclusive, and you never published it.’