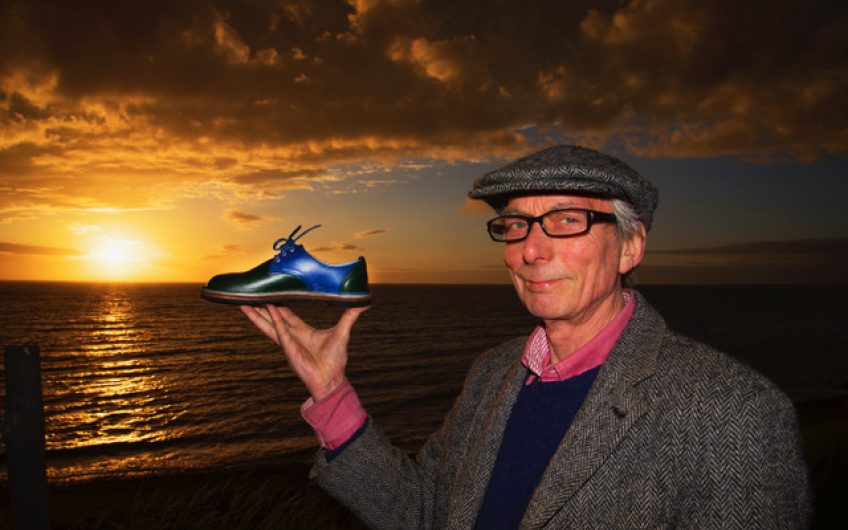 In 1960, at the tender age of sixteen, Alan entered Harrow Art School, one of the creative crucibles of the Swinging Sixties. Here, his keen young eye was nurtured, and he honed his skills in graphic design with teachers such as Peter Blake. From here, he took his talents into the world of advertising, becoming a successful Art Director until, in the early seventies, he was seduced by the growing trend towards macrobiotic foods, meditation and acupuncture. It wasn’t long before he renounced ad-land to pursue a dream, and moved to Aberystwyth. Here he opened The Friendly Stores - the first ever Wholefood shop and alternative health information centre in Wales - where he passionately redirected his considerable skills to the promotion of a healthier way of living.

Meanwhile, having trained as a reflexologist under the tutorage of Doreen Bayly, founder of the British Reflexology Association, Alan turned his attention to the design and creation of health-giving footwear. His mission was to create feet-shaped Shoes, and thereby strengthen, revitalise, heal and rejuvenate the feet, legs, and entire body. From the starting point in 1976 of ‘vegetarian’ rope soled footwear, he steadily designed and developed his own unique techniques, culminating in his book, ‘How to make Rope Soled Footwear’, selling over 2,000 copies.

In his seaside fairytale workshop, Alan began to experiment with leather (“a grateful way to use an animal’s skin”) and by 1992 he had created ‘Shandals’ - a unique design to straighten and strengthen the toes. He then elaborated on the formula using evermore rich combinations of materials, all beautifully photographed. By now, his clients included Billy Connolly, Sir Alec Guinness and actresses Sophie and Emma Thompson.

When Alan reached his 60s, he took on an apprentice in the hope that his mission philosophy and his legacy would continue. That apprentice was the young Ruth Emily Davey, who has spent 15 years learning and developing his work. Ruth went on to win several awards for Alan’s shoes and now runs a dedicated shop in Machynlleth, Wales. In 2019 Alan and Ruth discovered their designs had been (badly) copied by Chinese manufacturers, so to counteract this, they founded The Original Shandals Co. as a joint partnership to make off-the-shelf ranges of Shandals and shoes alongside their bespoke work.

His adverts have featured regularly in ‘The Oldie’ for over thirty years. Alan’s collection of Rope soled slippers are still made today, using beautiful fabrics for the uppers and for the soles. This collection is exceptionally rare and one of a kind pieces sell for around £1,500. His remaining signed and dated collection of shoes and Shandals will be launched on the shandals.co.uk online shop later on this year.

Meanwhile, Alan had become a local legend. Right up until his very last day, Alan has crafted beautiful healing footwear for thousands of clients.

Agile to the end, he practised tai chi, danced at every opportunity, and lived and loved life to the full. His home and garden was a bewitching extension of his personality, where he always welcomed good company and random conversation. Eccentric, flamboyant, generous, supportive, compassionate and inspirational, he will be greatly missed by the many whose lives he touched. Alan James Raddon's Legacy lives on.