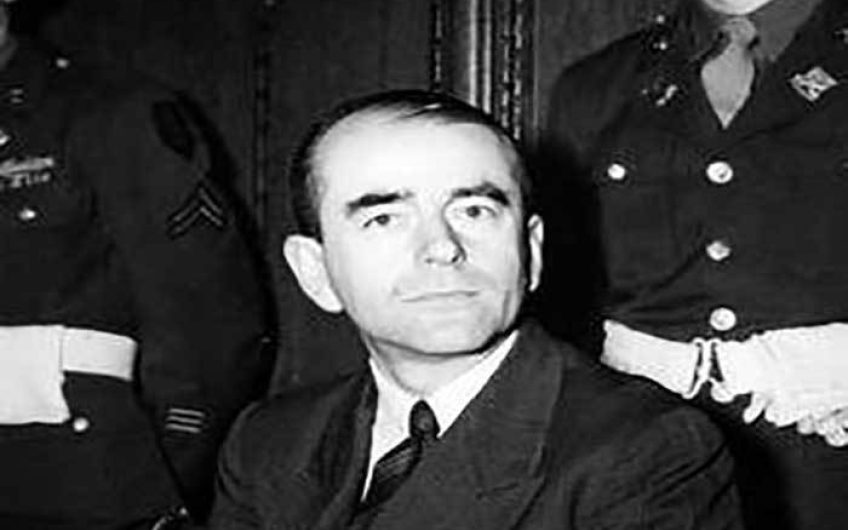 Speer at the Nuremberg Trials
View Full Size
1
of 1

It was in the end too much for a well-intentioned German friend of mine, passing through Oxford last summer.

Amazed by the sheer inefficiency of so much in England – the dustbins, the railways, etc – he said, ‘How did you manage to win the war?’

One answer is contained in Martin Kitchen’s new book about Albert Speer, Hitler’s favoured architect, who ran a large part of the German war economy.

When large matters came up, the Nazis were amazingly inefficient. They really lost the war in the air. Hitler had threatened, in the Thirties, that he would smash his enemies into the ground by bombing, and took great pride in his air force. But there were seventeen different and competing Luftwaffe research establishments, and allocation of scarce materials was so slipshod that, in the Messerschmitt works in Bavaria, valuable aluminium was used to make ladders. Germany never did manage to create a long-range bomber.

True, Hitler in 1939–40 brought off a huge victory in France, but as AJP Taylor – one so often comes back to him – noted, this only showed that armies would lose battles if they were led badly enough.

The British performance was much better. Winning the Battle of the Atlantic, against the U-Boats, was probably the most important priority, and great bravery and ingenuity went into that. But a third of the war economy, for better or worse, went into the air war, especially the bombing of Germany’s cities.

This is a still fought-over aspect of the British war effort. On the whole, common mortals would say that the Germans, having started it with Warsaw, Rotterdam and the Blitz, had it coming to them. This was a view supported by the Queen Mother and Margaret Thatcher in 1992, when they backed the erection of a statue – outside St Clement Danes, the RAF church on the Strand – to ‘Bomber’ Harris, destroyer of German cities.

But our pre-eminent historians, Max Hastings and (with reservations) Antony Beevor, have condemned the bombing campaign, on the grounds that it cost a huge amount and did not do much to harm German war production.

In the early days, after his capture in 1945, Albert Speer agreed with this – as he told the Americans who were looking into the question for their Strategic Bombing Survey (they included the economist John Kenneth Galbraith). He said that the aerial destruction, by flattening small civilian enterprises, had simply caused an increase in employment in arms factories and thereby caused an increase in their output. It was higher in 1944 than ever before; a matter in which Speer, the organiser, took pride.

In 1945, Speer regarded the bombing offensive as a war crime comparable to any of which, at Nuremberg, he stood accused. And no British observer of my age looking at Cologne, or Hamburg, and even smaller places south of Würzburg, which were smashed even in the last week of the war, can fail to have misgivings.

I have some reason for considering this. I took Speer to dinner in London, at Brown’s Hotel in Albemarle Street, Mayfair, on the night before he died – of a stroke in St Mary’s Hospital, Paddington, on 1st September 1981.

The subject of the bombing campaign came up. I had been preparing a programme on Hitler and art. Rather to our surprise, Speer, then 76, agreed to come to London for an interview. I took him out and we covered a lot of German history – he rather surprised me by not knowing that Protestants had been much more likely to vote Nazi than Catholics. He was good company in a magisterial, German way.

On the following day, we did the interview, and he was less tired than I was. When he left, all the women on the set looked at him with fascination.

He had booked into a rather nondescript hotel, which he said was full of Arab children playing in the corridors, and I wondered why he had not chosen anything more appropriate.

The night before, I had asked him about the bombing campaign, and he surprised me. He did not condemn it. He said the Luftwaffe had been forced to defend German cities, Berlin especially. The German air force was therefore, after 1943, hardly a presence at the fronts, where it mattered.

This was true. In June 1944, there was hardly any German air defence over Normandy. I once met a German industrialist, who took his plane up at dawn on D-Day.

He said the sight of that Armada, with an umbrella of Allied aircraft on the horizon, convinced him there was no hope.

German air resources were given to home defence and, in June 1944, there were two enormous defeats: Normandy in the west; White Russia in the east. Ninety thousand German prisoners were marched along Moscow’s roads. There is another argument for Bomber Harris’s campaign, and it is a vicious one: that Germany (like Japan) could only be cured of nationalist mania if a hail of bombs came down.

She was certainly cured, and is now a model – or even the model – country. But she still lacks self-confidence, and a new book, Die Getriebenen (The Driven Ones), on Chancellor Merkel and the refugee policy, by Robin Alexander of Die Welt, reveals the background to her disastrous decision to let in a million Third World refugees in 2015.

Everyone knew it would be a disaster, and the measures were in place to stop it. But no one wanted to take responsibility for the consequences in the world’s media: barbed wire, searchlights and barking Alsatians on the border, with thousands of distressed people clinging to the frontier posts. So Europe was landed with a huge headache (and I was given a clincher argument for voting Brexit).

However, in Speer’s case, there is always the suspicion that he said what he thought would appeal, not what he believed. After his capture, he behaved impeccably with interrogators, including the historian Hugh Trevor-Roper, who was very impressed.

At Nuremberg, Speer’s apparent candour (plus a clever lawyer) impressed the judges, who gave him a long prison sentence but not the hanging which others got. Upon his release, he wrote memoirs (and other books), under the direction of professionals such as Joachim Fest and Wolf Jobst Siedler.

In those books, he presented himself, in very readable language, as a technocrat without political enthusiasms. He said that he did not know about the final solution, the plan to exterminate the Jews, as distinct (distinct?) from their mass deportation to work camps, but he probably just did not enquire.

Speer was intensely ambitious, and buried himself in work. Kitchen is excellent when he discusses Speer’s career as architect of the vast capital, ‘Germania’, into which Hitler meant to transfigure Berlin; very good, too, on the monstrous Reich Chancellery, which deserved the pasting it got from the Russians in 1945.

At the turn of 1942–43, Speer was appointed head of the war economy, and claimed he had done a wonderful job with armaments. All of this was contested, and Martin Kitchen echoes and expands on the critics.

Much of the argument, as to the efficacy of this or that method of improving the war-economic performance, is quite technical, but the basics are clear. Speer sided with industrialists, used slave labour lavishly, and out-manoeuvred the nationalising concerns and local loyalists in the Nazi Party.

In a sense, he can even count as a founder of the New Europe. With a Vichy French technocrat, Jean Bichelonne, he arranged for co-operation between French and German metals industrialists. German machinery went west but, by another Nazi arrangement, French labour went east. In 1943, the great French aircraft industry produced all of six planes.

It is not clear that we need another book on Speer, or perhaps even on anything else to do with Nazi Germany, unless it’s a really good novel or film. But Martin Kitchen writes well, brings back the atmosphere of the time, and has immersed himself in the details of German armaments output in the Second World War: he justifies himself.