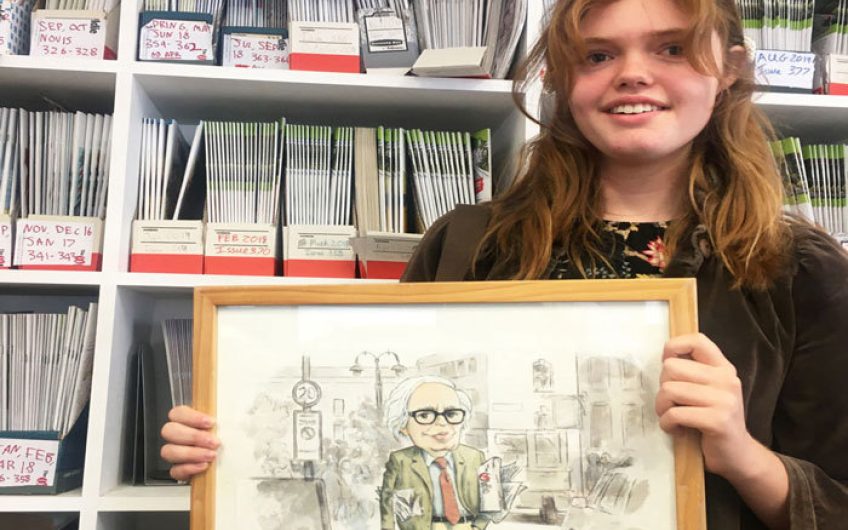 Freya Bearn with a portrait of her father, Alexander Chancellor, by Nicholas Garland Credit: John Bowling
View Full Size
1
of 1

My father, Alexander Chancellor, former editor of The Oldie, would have turned eighty last month.

His birthday was usually spent very quietly at Stoke Park, his home in Northamptonshire. I was a day girl at a boarding school in Oxford for three years and had Saturday school that ended near midday. Straight after school, my mother and I would get in the car and arrive at Stoke Park to be greeted by my father, standing over the stove, cooking lunch. As a very young child I would tell him that he ought to be a chef as he was such a brilliant cook. This idea, although ridiculous, was perhaps more sensible than my other belief that he should be a gardener because of the broad beans he grew in a vegetable patch.

As well as broad beans, there were also hens at Stoke Park. The hens lived in a small enclosure with a rather beautiful old wooden door. I called it the “Secret Garden” (not that it was remotely secret ­­– I told everyone about it but was sure to do so in a hushed tone). One of the hens I named Sweetie due to her most amicable nature. Her feathers were a beautiful golden colour and she was my favourite of all the hens.

One day, Papa and I found Sweetie lying on the ground, unable to move. We carried her inside and lay her in a box with some straw. We cared for her in this box for a couple of hours until she finally died. We carried her outside and found a spot in the orchard where we buried her. I covered the spot with a stone and planted a stick in the ground. As Papa and I walked back to the house hand-in-hand, we agreed to get another hen with the same beautiful golden feathers.

“What should we call it?” Papa asked. I paused.

“How about Demerara, as her feathers were the same colour as demerara sugar?”

“That’s a bit long and complicated, don’t you think?” he said. “Why don’t we just call it Sugar?”

I thought that this was a splendid idea and our plan was agreed. However, it was never fulfilled as Papa died before we got the chance.

In the sitting room of Stoke Park, there was a piano, which Papa would often play. The music of his childhood: musicals such as Annie Get Your Gun and Oklahoma, and the songs of the Second World War, We’ll Meet Again and The White Cliffs of Dover, became the music of my childhood, too. It was my job to turn the pages. Papa had always been very musical and at one point had considered becoming a concert pianist. As a child, he also played the violin. When he was seven years old, his mother once asked him to play for their guests. In response, he declared: “I am too old to be an infant prodigy!”

As well as being talented, Papa was a very pretty child and learnt to use this to his advantage. At the end of the war, he and his siblings liked to ask the American soldiers for chewing gum. When it came to deciding which one of them would approach the soldiers to ask, Papa would say: “I should ask for I have the longest eyelashes”. So, of course, he did and the soldiers never turned him down.

When I was little, Papa would come into my bedroom in the evenings to wish me goodnight. He would read me a story and afterwards would sing me a song that he said his mother used to sing to him:

Papa will sing a song to Freya.

Freya will go to sleep.’