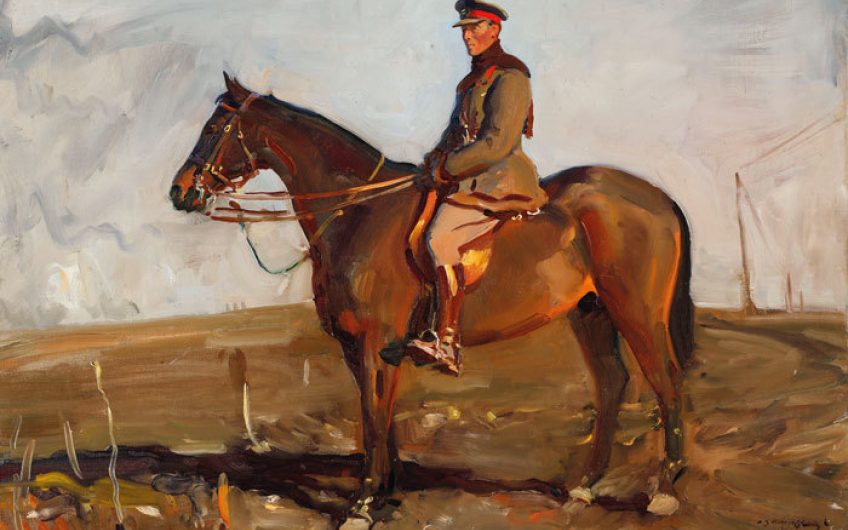 One cold day in January 1918, the one-eyed artist Alfred Munnings was riding near the front line at St Quentin, on the Western Front.

He was wearing a deerstalker cap, an eyepatch, a cape and had an easel attached to his saddle. Not a good combination for the military blimp approaching him on horseback.

‘Where are you going and what the devil are you?’ barked the blimp.

Munnings was uncowed to a fault and certainly wasn’t taking this.

‘I am going to see General Seely,’ he replied, before adding with characteristic élan, ‘What am I? Well, back home they say I am a genius.’

General Jack Seely was my grandfather, then commanding the Canadian Cavalry to which Munnings had been despatched by Max Aitken (later the first Lord Beaverbrook) to record that part of the Canadian war effort.

I have only one memory of my grandfather – as an old man in a dressing gown; one of those red and blue silk things. He had a hook nose and a rheumy, kindly eye and was sitting taking sips from an oxygen cylinder. He pointed to a black box on the wall and said, ‘That is called a “Division Bell”. When it rings, we have to get up and rush round to Parliament to vote.’ It was 1947. Jack Seely was 79. I was only four. My grandfather didn’t look like running very far. He didn’t. He died later that year.

If Munnings was over the top, then so too was Seely. When a ship was wrecked near his Isle of Wight home, he swam out with a lifeline to get everyone to safety. When his light grey Arab horse Maharajah was refused boarding to sail to the Boer War ‘for reasons of camouflage’, he took it round the back of the warehouse and dyed it brown. When, as Secretary of State for War in the Asquith government, he had to resign in 1914 over a Northern Ireland crisis – not the last man to do that – he sucked it up and he and his horse Warrior went to the front within a week of the war’s outbreak.

So it was that, on a clear, frosty morning in January 1918, Seely and Warrior was the very first of the paintings of men and horses and landscapes and lumberjacks that Munnings did in France over the next five months. They have never been back together in Britain until the exhibition at the National Army Museum in London, which is opening at the Munnings Museum in Essex on March 23rd. The show includes the sketchbooks he used, along with 150 other works.

It must have been a precarious sitting for both artist and subjects. The German line was less than two miles away – so a lucky shot could have taken out all three of them. What’s more, as the ground thawed, Warrior kept sinking into the mud and, although Munnings was standing on a duckboard, the cold numbed his fingers.

After a couple of hours, Seely found some important military duty to call him away, leaving his batman Harry Smith to deputise and take great delight as unwitting troops respectfully saluted his senior uniform. Smith was a survivor; with Seely you had to be. An ambitious farm boy from Itchen Abbas, Smith had first met Seely in the Hampshire Yeomanry and returned from South Africa to the role of Seely’s butler at his Isle of Wight home, Brook House, only to be shipped off to war again in 1914. Butlering days were resumed after France, Harry married Rose the cook and they finally retired to a rose-covered garden nearby on the island, to live happily ever after.Back in 1918, Munnings’s enthusiasm for wine and song was an instant hit in the battered Nissen huts that served as the Canadian Cavalry HQ. They must have become the most valuable front-line lodgings in history as assorted masterpieces dried out on the walls. Munnings’s forte was the recitation of long sporting country ballads in which, when they moved to grander quarters, such as nearby Chateau de Davenescourt, he would be accompanied by Seely on piano.

Finding such superior digs was made possible by my grandfather employing as ADC what must surely have been the best connected and certainly most blue-blooded soldier in any army. Prince Antoine d’Orléans Braganza was the grandson of the last Emperor of Brazil and the great-grandson of Louis Philippe, the last King of France. Antoine’s full names were Antonio Gastao Filipe Francisco de Assis Maria Miguel Rafael Gabriel Gonzaga. His friends just called him ‘Toto’ and his niece’s memoirs included the enviable line: ‘Oncle Antoine, aime par tous mais adore par les femmes.’

Prince Antoine was also the subject of one of Munnings’s most magnificent mounted portraits. But he was also a lot more than some ex-royal superfixer witness. He won both the MC and the Légion d’Honneur for remarkable feats of daring before his tragic death in an air crash just four days after the Armistice. He had been part of a Seely band that included a genuine superhero in Fred Harvey, a bishop’s son from County Kildare. He had emigrated to ranch life in Calgary only to return as full-back for Ireland against Wales at Cardiff Arms Park. Then, in 1917, he won a VC by taking out a machine-gun post – single-handed – at Guyencourt.

When the long-expected German onslaught of ‘Operation Michael’ broke through the Allied lines in March, Munnings was moved to cover the invaluable work of Canadian lumberjacks in the Forestry Corps. But he never lost touch with Seely and the cavalry. Indeed one of his most famous works is The Charge of Flowerdew’s Squadron: an idealised image of part of one of the last great swords-drawn charges. It was part of a larger cavalry engagement, initially led by Seely on Warrior and mostly involving a bloody, hand-to-hand, fixed-bayonets battle to clear the Germans from Moreuil Wood near Amiens on 30th March 1918.

Years later, Harvey growled to a friend, ‘I don’t know about Guyencourt but I think I did a VC’s worth in Moreuil Wood.’ After the war, Munnings's work in the 1919 Royal Academy exhibition led him to become the go-to painter for the seriously rich, wanting to see themselves immortalised in the saddle. So much so that, by 1934, when Seely, now the first Lord Mottistone, invited him down to the Isle of Wight to illustrate the book he was writing about his horse Warrior, Munnings would have been just about the most expensive canvas-by-canvas painter in the world.

Munnings accepted the invitation, sketched all day and caroused into the night, and a good time was had by all until it came to payment.

‘Pay him?’ Seely said when my aunt enquired on the artist’s behalf, ‘I made him.’ It was an impasse only solved when grandpa noticed how lame Munnings had become at a dinner of Winston Churchill’s ‘The Other Club’, of which both were members, and suggested he join him on his annual trip to Bad Ems spa in the Rhineland.

Cordiality and carousing were resumed there in what must have been something of a self-defeating exercise. For the two old comrades would sweat away in the steam room of a morning, only to put most of it back in the town square of an evening, listening to the band and swigging down the local hock.

They were remarkaable men, but no one ever rated modesty at the very top of their many virtues. ONe story has it that, after Moreuil Wood, Seely suggested Warrior for the VC. The citation he wrote was a simple one: ‘He went everywhere I went.’ They don’t make them like that any more.