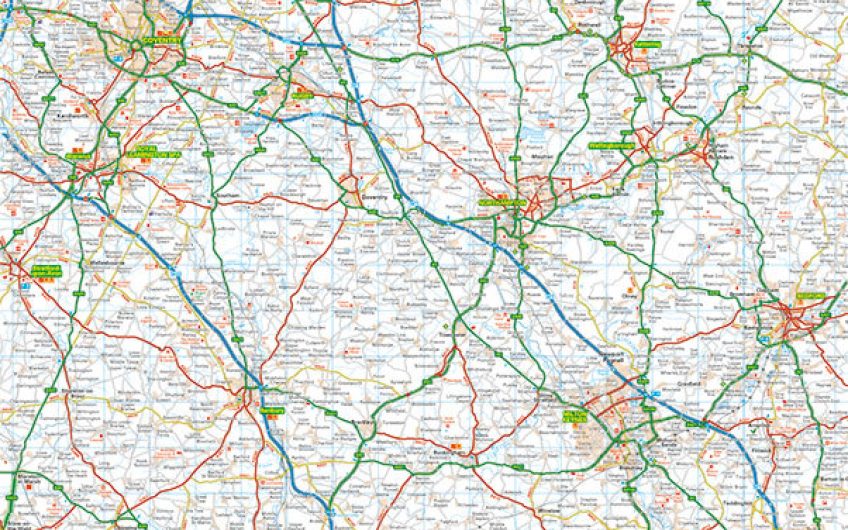 For the truth of the expression ‘all roads lead to Rome’ you need look no further than Watling Street. This precursor of the modern A2 (see Puzzle 6) ran southeast from a crossroads in London near the Elephant all the way to Dover. It then continued across the Channel and over the Alps until it reached Rome. It also prefigured the modern A5 (see Puzzle 10), continuing northwest from Marble Arch all the way to Wroxeter.

The Battle of Watling Street has gone down in history as one of Britain’s bloodiest battles and is thought to have taken place somewhere between London and Wroxeter in ad 60 or ad 61. Boudicca led the uprising of the Britons against the Romans in the south but her larger army suffered heavy losses at the hands of the more capable opposing force, and she allegedly poisoned herself following her defeat.

This section of mapping shows that the A5 takes the course of the Roman Watling Street from Milton Keynes, where the grid road system incorporates Watling Street as V4 (see Puzzle 32). The A5 returns to the Roman route just north of Stony Stratford and through Towcester all the way to junction 17 of the M1, near to the Watford Gap, that time-honoured marker of where north meets south.

1. The Watford Gap is the site of which motorway first?

2. Which famous racecourse is located on Watling Street?

3. Which monument, depicted on this map, was built by King Edward I to mark one of the twelve places where his wife’s body rested on her funeral procession from Lincoln to London?

4. Cosgrove ‘Iron Trunk’ aqueduct was built for which canal to pass over which river?

5. What is the approximate distance shown on the map between Stony Stratford and Towcester?

6. Silverstone sits by what kind of junction on the A43?

7. Which place on Watling Street is an anagram of COUNTED?

8. Which is the shorter route from Stony Stratford to Watford: the M1 or the A5?

9. Which two sporting grounds in Northampton can be seen on this map?

10. The sound of one popping up at breakfast time?

4. For the Grand Union Canal to pass over the River Ouse

8. The A5 is roughly three miles shorter. Taking the M1 would be the quicker route by about three minutes

All puzzles are taken from The AA British Road Map Puzzle Book by Helen Brocklehurst, published by Sphere (£14.99) and available here.

When the looting hit home