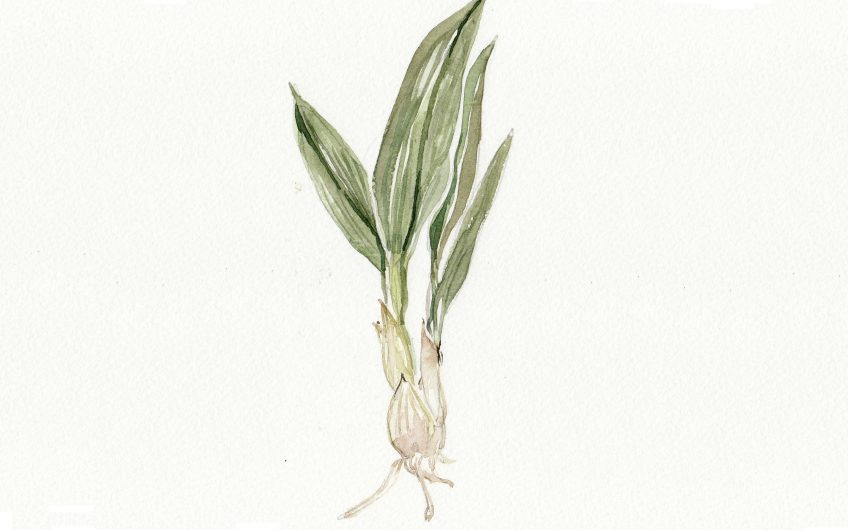 Coming soon to a ditch or damp patch of woodland near you – Allium ursinum, our native wild garlic.
You’ll smell it before you spot it. Wind down the car window, when travelling at a stately pace, and the fragrance is unmistakable. As are the dark green rafts of broad, tulip-like leaves that crowd together like teenagers at a rock concert. Often called ramps or ramsoms, they are also known in Britain as Stinking Jenny for the flavour they impart to milk after the cows have found the garlic patch. More enthusiastically received in France, where it’s known as ail d’ours, bear-garlic, the plants are gathered in spring and sold in big bundles in farmers’ markets for inclusion in salads, omelettes, quiches and anything savoury involving eggs and cream.

All members of the allium family are edible, though some are more palatable than others. Urban dwellers can take advantage of an enthusiastically naturalised garden escape, A. triquetrium, a Mediterranean native with narrow leaves and a triangular stem. None of the wild garlics form cloves – unlike the cultivated bulb-garlic, an ancient hybrid – but rather remain leek-like, with a pale leaf-base, shading upwards to green, from which shoots a pretty white head of bell-shaped flowers.

To gather your own – avoiding lookalikes such as bluebell or lily-of-the-valley (use your nose) – pick while young and tender before the flower-stalk shoots, separate a few stems from its clump by slipping a knife blade into the earth parallel to the plants, and tug firmly. The hole will soon be filled with new growth, though if the plants are really sparse, pick single leaves. To prepare, trim, rinse and shred as for spring onions. The season is short: to keep some for later, whizz with olive oil and salt and freeze in little bags.