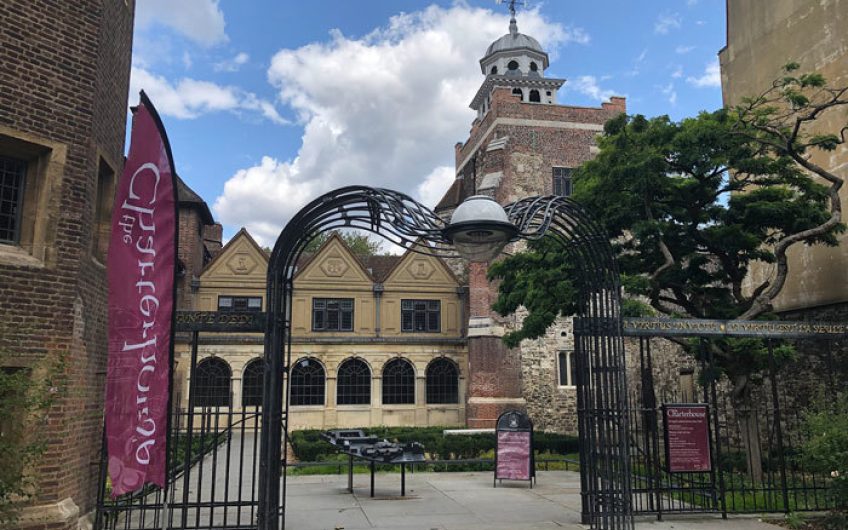 View of the entrance to the London Charterhouse, an almshouse in Islington, London By KJP1 CC BY-SA 4.0
View Full Size
1
of 1

If you’re driving up the Clerkenwell Road, you will have passed it: London’s version of the ‘low door in the wall that opened on an enclosed and enchanted garden’, that so enraptured the young Charles Ryder when he popped along to Brideshead.

The door of the Charterhouse is a sturdy, medieval, oak slab, studded with iron rivets and bolts. It opens on to the most exclusive celestial waiting room in the world, far more senior common room than common: over seven immaculate acres of lawns and cloisters and secluded quads where 43 impoverished oldies – they have to be single, over a certain age and under a certain income bracket – currently live: eating together in a formal hall with a minstrels’ gallery, watering the herbaceous borders, playing pétanque, flicking through periodicals in the library, and generally having their green thoughts in a green shade, in the twilight of their years.

Picture an Oxbridge college, only for educated, poor pensioners – then get your heads round this. Two years ago, the Charterhouse appointed a woman Master, the attractive and dynamic Ann Kenrick, 59, for the first time in its 400-year history – and she is creaking open that massive oak door to the monstrous regiment of women.

As we wander round the quad, inspecting the bee hives, she tells me about Thomas Sutton, the benefactor who bought the Charterhouse in 1611. His will provides for up to 80 Brothers, ideally ‘either decrepit or old captaynes either at sea or at land, maimed or disabled soldiers, merchants fallen on hard times, those ruined by shipwreck of other calamity’.

No mention, you will spot, of decrepit old womyn, which is why I’m here. Only 12 women have applied in three months; a few have been interviewed, but one didn’t take up a room as she couldn’t bring her cats.

So far, then, no women takers, not even Enid – but it is very early doors.

Meanwhile, Kenrick allows that the Brothers are a tiny bit iffy about the old place going co-ed, but all the ones I meet are careful to be inclusive.

The very first one is the ballet critic of a national newspaper, who doesn’t want to be named. All the Brothers must have had serious careers, and many broadcasters, hacks, teachers, lawyers, musicians and architects end up here.

We cross paths as he’s lighting a fag in the cloister. Will women change the atmosphere? ‘Well… they might,’ he says, drawing smoke in deeply, ‘They will have to fit in, won’t they?’

As we go into lunch, I ask a Brother called Philip whether there’s a risk of couples forming when women arrive.

‘Brothers have to be single,’ he says. ‘It only works properly if everyone is single – otherwise you get cliques. There are almshouses for couples, but this has been for single men for 400 years. Once, a Brother left to get married in the war – he was billeted in Godalming by the school, with a lady, and they got married – but you have to remember we have one rule. We don’t have a rule about chastity, as the Brothers don’t take vows. The rule is this. No Brother is allowed to have overnight guests in their flat. We have guest rooms for that. They can book in.

‘If a Brother has a girlfriend or a boyfriend, and they want them to stay, they can stay in the guest room.’

‘Can the Brother stay in the guest room, too, with his guest?’ I ask.

‘What you’re trying to get at,’ Brother Philip says, ‘is where does sex take place, isn’t it?’

He doth raise an interesting question. The answer is that it takes place, if at all, by day in the Brothers’ rooms, not at night in the guest rooms.

The Master bangs a gavel; we stand. She says Grace, and introduces the guests.

‘Rachel is here to write a piece about the arrival of women for the Oldie.’

The other lunch guest is a man of the cloth who is described as ‘a Sub-Dean of St James’s Palace Chapel’.

Lunch is greasy lamb chop coated in shiny Bisto gravy, mashed potato and broccoli, salad, or omelette, followed by sticky toffee pudding and cream. Skool food, but then that’s what most public schoolboy pensioners like.

I meet a dress designer who made a suit for Jackie O, a brilliant Russian translator, and a teacher. I struggle to find any Brothers who are – or ever have been – interested in the fairer sex.

‘I reckon it’s around two-thirds,’ says Kenrick, in answer to my question as to how many Brothers are gay.

After lunch, we have coffee in the buttery, and discuss what the lady residents should be called. Siblings, Sisters and Graces are all mentioned. I say they should be called Brothers.

Indeed, when I move in, I will insist on it. I’ve already put my name down for a flat in the commercial bit called Pensioners’ Court, designed by Michael Hopkins, architect of Portcullis House.

After all, the late Jeremy Lewis once introduced me at an Oldie lunch as ‘The Editor of The Lady and Boris’s brother.’ Both, at the time, were highly inaccurate – I’d left The Lady years earlier.

But it’s nice to think that dear Jeremy’s words were, in fact, prophetic if, as I intend, I end my days in peace in the cloistered calm of the Charterhouse.

W B Yeats and the Protestant phoenix