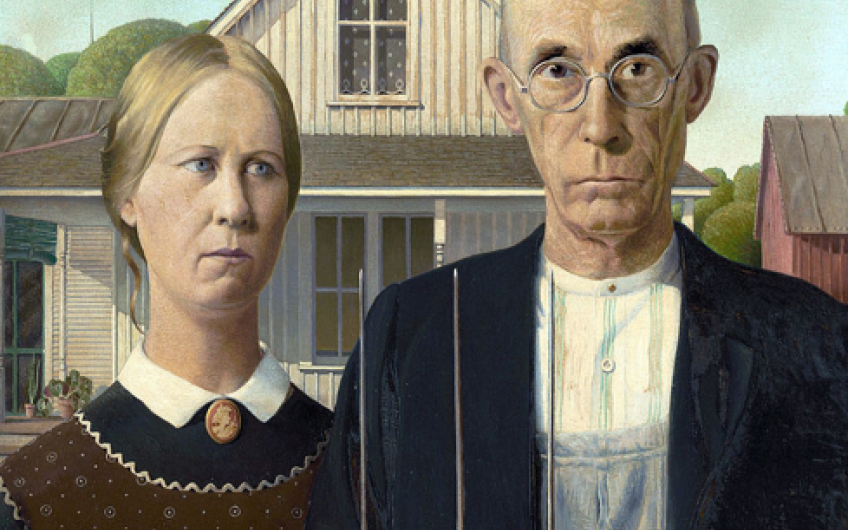 The star of the America After the Fall show at the Royal Academy is ‘American Gothic’, the 1930 picture that has come to signify the American Midwest to the world. It’s the first time the picture’s ever gone abroad.

The couple are in fact father and daughter, not husband and wife. Wood’s models were his dentist, Dr Byron H McKeeby, and his sister, Nan Wood Graham.

It is the most parodied of all American pictures – first imitated in 1942, when Gordon Parks altered the image to show a black cleaning lady holding up a broom in front of the American flag. In 1968, Nan Wood Graham sued Playboy for showing a couple in skimpy swimming costumes in front of the house. In 2003, Paris Hilton and Nicole Richie, Lionel Richie’s daughter, imitated the couple to push their reality show, Simple Life.

While the couple change in the parodies, the house in the background never does. It is a direct copy of a real house on the fringes of the little corn-farming town of Eldon, Iowa. Twelve years ago, I visited it – and it was in a sad state, with peeling paint and buckled roof tiles. 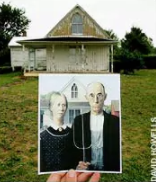 Since then, it’s been smartened up, but still remains an unremarkable building from 1881, noticeable only for that one detail – the Y-shaped Gothic window, which gives the painting its name.

It was that window which caught Wood’s eye as he drove by one day. He burst into laughter at what he called the window’s ‘pretension’. That window is, incidentally, hinged, to move furniture into the first-floor bedrooms, because the inside staircase was too small for big furniture.In 2007, two years after I visited, the American Gothic House Center was built next door, as part of a grand refurbishment programme. The house, owned by the State Historical Society of Iowa since 1991, is now safe. In the 1960s, a neighbour tried to buy the house and knock it down to extend his landholding.

In fact, Wood was a little hard on that supposedly pretentious window. The original owners of the house, Charles and Catherine Dibble, bought the window from a catalogue by Sears and Roebuck, the huge American department store chain. So, in fact, the window was a mass-produced mainstream product – and there are American Gothic houses right across the country; but none so famous as the humble, three-bedroom house in Eldon.