An artist in Hungary 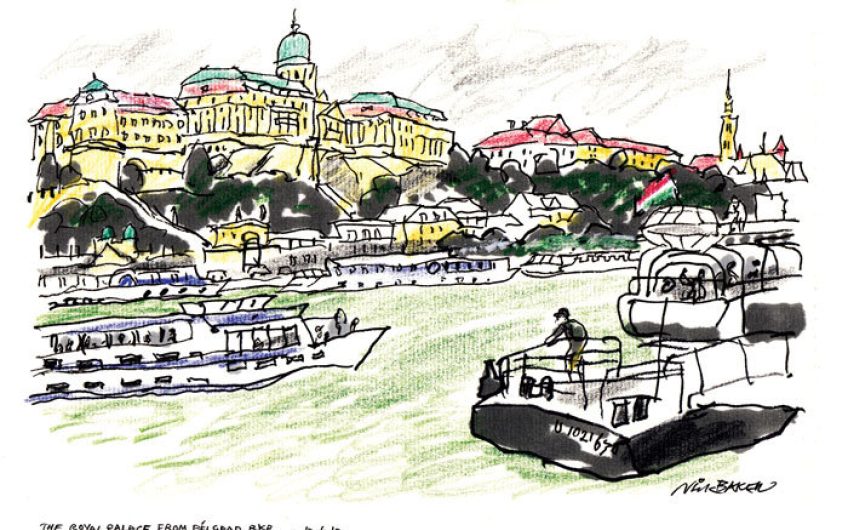 An Irishman drove me and my girlfriend Jenny from Budapest Airport to the old high-ceilinged apartment we’d rented in central Pest, passing Tesco and C&A signs and Communist-era flats on the way. We wanted to visit the Houses of Parliament, but despite what it said in the guide books, all tickets had been sold by nine in the morning. A furious Israeli woman told me, ‘I used to live here – nothing has changed.’

Budapest is a spa with hot springs and old thermal baths. The Prime Minister swims every morning before work. We walked across Liberty Bridge over the Danube to Buda. In the art nouveau Gellert Baths we had to buy clear plastic-bag-like bathing hats before swimming. Later, we got hooked on the many hot and cold pools at the Szechenyi Baths, where men played chess in the 38-degree water.

I drew the scene outside St Stephen’s Basilica – a Catholic youth rally, with Polish, Romanian and Ukrainian flags.

We visited the ‘House of Terror’ at 60 Andrassy Street, a grand boulevard. At the outbreak of World War Two, it was the headquarters of the Arrow Cross – the Hungarian Nazi party. Later, under Communism, the AVO – the secret police – took it over. A tank looms across the entrance hall, surrounded by images of those who suffered in this building, which is now a museum and memorial. The story of brutal oppression is told in the upper floors. The reconstructed cells and torture room are in the deep basement. Finally ‘the victimisers’ are pictured, some of them still living.

Public transport – the old metro, the trams, buses and trolleybuses – is free for EU nationals over the age of 65. It was also easy to explore further afield: Jenny took a one-and-a-half-hour boat trip down the Danube to Szentendre (‘A bit like many other pretty villages’), returning by train.

The ‘Siklo’ funicular took us up to Castle Hill where the Hungarian National Gallery, formerly the Royal Palace, has a wealth of paintings and drawings by Hungarian artists, all new to me. I particularly liked Jozsef Rippl-Ronai’s pen drawings, a cross between Van Gogh and Lautrec.

Donning over-slippers we slid about the parquet at the Franz Liszt Museum. Later, a meal of goose liver followed by super-strudel with custard cost about £30 for two.

How do Hungarians feel about life after Communism? I asked a young English-speaking man: ‘Is it better for people now than before 1990?’ Answer: two per cent are better off, they have money to invest. But forty per cent of the working class were better off before 1990. ‘It’s a difficult time for Hungary now,’ he said.

On our last evening we met our elderly neighbours, a German-speaking doctor and his wife. They had lived in their flat for 62 years. Huge antlers from deer shot by the doctor lined the hall. We left with a gift of scones made by his wife. ‘Viszontlátásra,’ Jenny said to her. ‘Goodbye,’ the doctor’s wife replied, ‘Come next year.’

Maybe we will. Budapest has plenty more to offer.