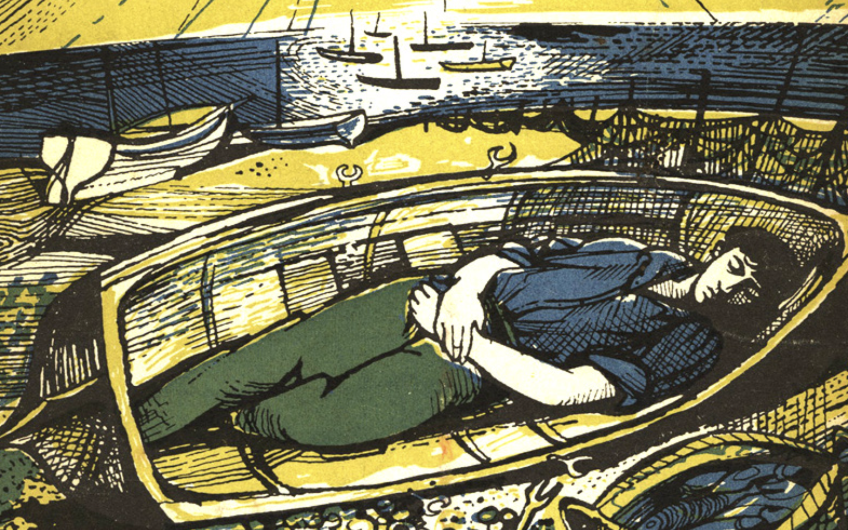 In 1954, when I was 17, I went to an exhibition curated by the ballet critic Richard Buckle. It was in honour of the pioneering Russian impresario Sergei Diaghilev, whose name is for ever associated with Stravinsky and Picasso and the dancer Vaslav Nijinsky, with whom he was hopelessly infatuated.

Every room in Forbes House, the grand mansion near Hyde Park Corner, where the show took place, was sprayed regularly with Diaghilev’s favourite perfume, Mitsouko by Guerlain. I was a working-class youth from the backstreets of Battersea and this was one of my first encounters with what might be described as decadence.

I was in for a treat that afternoon. The celebrated painter and illustrator John Minton was due to give a talk in the early evening on the various paintings and drawings on display, and I was eager to see and hear him. The lecture hall was packed when Buckle introduced his dear friend to the audience.

Minton acknowledged the applause that greeted him and then announced that, in his opinion, most of the works of art in the exhibition had absolutely no merit whatsoever. In fact, they were rubbish. The one exception was a set design by Pavel Tchelitchew, who is remembered today for his portraits of Gertrude Stein and Edith Sitwell.

As for the rest – well, he couldn’t find a single word of praise for them. Buckle looked at him in horror. He mentioned one or two famous names, but Minton wasn’t to be distracted. It was clear to everyone present that the distinguished speaker was hopelessly drunk – and thanks in part to Mark Gatiss’s television documentary, subtitled The Lost Man of British Art (BBC 4), on telly on Monday night, I now understand why.

He was beginning to be marginalised by the art establishment, which favoured Bacon and Lucian Freud above all other British artists and was already obsessed with the likes of Jackson Pollock and Rothko. The next three years, which culminated in his suicide at the age of 39, must have been hellish for him.

Minton was queer, exuberantly so, at a time when homosexuality was a criminal offence. It was his particular misfortune to be attracted to normal (no one said ‘straight’ or ‘gay’ in those days) men, who tended to get violent if a pass was made. I can vouch for the fact that Oscar Wilde was still being mentioned abusively half-a-century after his death, so benighted was popular opinion whenever the subject of homosexuals came up in conversations. But perhaps it was the rejection of his beautiful gift (as shown in the above picture for Time Was Away, the Corsica travel book by Alan Ross) that dealt the hardest blow to him.

Gatiss’s programme was an act of homage to a minor artist. Yes, he’s minor – but does it matter? I know I wouldn’t mind owning a Minton painting or drawing or even a sketch. I could happily look at it with as much pleasure as I look at a Prunella Clough, for example. Who is Prunella Clough? Are you telling me you don’t know?