An odyssey round my treasured islands - Taki Theodoracopulos 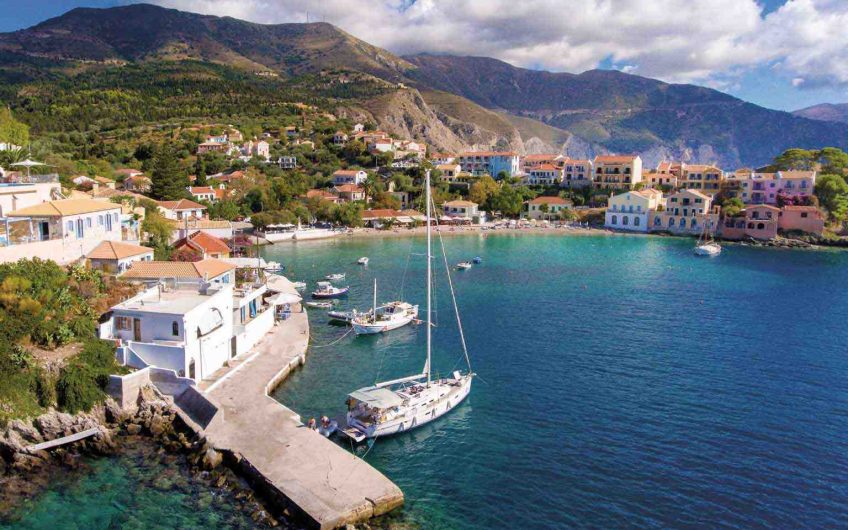 As Greece opens to tourists, Taki Theodoracopulos sails home across the Ionian Sea

I’ve been looking at cows from my bedroom window for three months. Although their bovine gaze betrays more intelligence than those of their farmer owners, I’m sick and tired of all of them. Good old Helvetia can be fun during the winter but, come spring and summer, only Julie Andrews likes the sound of the Alps.

I need blue skies and wine-dark seas, as described by my direct ancestor Homer.

So the Isles of Greece it is; the Ionian ones, whence the Taki family comes, and where the hated Turk’s footprints can be discerned only with a powerful microscope.

As readers of the Odyssey know, Ithaca was the kingdom where Penelope wove for 20 long years, keeping the suitors at arm’s length while waiting for her husband, the king, to return from the Trojan War.

Ithaca was almost uninhabited when the Republic of Venice took over the Ionian Islands in around 1350. The fall of Byzantium in May 1453 saw mainland Greece go under the yoke of the Sultan for 400 long years. Not so with the Ionian Islands.

The seven isles that lie west of the mainland came and remained under the influence of Venice, the Doges acting as benevolent rulers, allowing the Greeks to practise their Orthodox Christianity – although many took up Catholicism as a result.

There was no coercion – some of my family were raised Catholic – and hence the islands enjoyed a renaissance the rest of Greece did not.

Napoleon did away with the Republic and the Ionian Islands came under French rule, but only for a few years. Then the British arrived, staking out cricket pitches in the middle of Corfu Town, introducing teas and polite conversations instead of rowdy and loud political arguments, and reinventing gay practices that had lain dormant since classical times.

In 1864, when Prince George, aged only 17, came from Denmark to take up the Greek throne that the Great Powers had decreed, the British Government handed over the Ionian Islands to Greece as the new king’s dowry.

Then something funny happened. Venetian titles were abolished by the Greek constitution: in view of the fact that all Greeks were noble, titles were redundant. Seeing some of these ‘nobles’ from the mainland for the first time, a great-grandfather of mine, whose Venetian title had gone with the wind, was known more than once to have raised an eyebrow.

But enough said about the past – although writing about Greece and not mentioning history is like alluding to Philip Green and not using the word ‘vulgar’. Prince Philip was born on a kitchen table in Corfu 99 years ago, in 1921. His father, Prince Andrew of Greece, almost came to a bad end following the Asia Minor catastrophe of 1922. Six politicians were shot at dawn, the Brits insisting that Philip’s father be allowed to ‘escape’.

Corfu is the largest of the seven islands; I used to visit annually – but only by boat. Tourism has done to Corfu, a beautiful, lush island when the Durrells first visited in the Thirties, what tourism does to all beautiful places: deprived it of its charm and uniqueness.

The last time I was there, I had dinner at Jacob Rothschild’s house, a gorgeous place high above the seafront with its own port, and in a moment of greed I agreed to charter my boat for one week to Nat Rothschild, who was eager at the time to get away from his old man on my lovely sailboat.

When I got back on her, I found a note in my cabin. It read something like this: ‘Had someone told me that I would be spending nights in Taki’s bed, I would have wagered everything I own against it. But I’ve had four wonderful evenings in his bed. Peter Mandelson.’

South of Corfu lie Paxos and Antipaxos, two of the most charming islands because they have stayed small and totally unspoiled. About ten years ago, having come close to an Antipaxos bay with my boat and then swum ashore, I was approached by two Italian ladies of a certain age and told in no uncertain terms in extraordinarily upper-class accents not to anchor so close, because boats draw other boats and soon the bay would be like St Tropez. I agreed, and signalled to the captain to distance himself and my boat, Bushido.

There are only a few farmhouses on the island and the Italians seem to have discovered it long before we Greeks did.

Further south lies my favourite island, Cephalonia. There are charter flights directly from London to Argostoli, the capital – and probably the best natural harbour in the Ionian archipelago.

Cephalonia is green all over and hilly, and its people are simply wonderful and welcoming. I sail up to Fitzcardo, a northern anchorage, and dine in Toula’s, a taverna on the water which serves the best fish and the finest Greek wines. There are nearby hills to walk up for exercise, very green and full of wild flowers, and wonderful bays to swim in. Assos beach has water that makes anything the West Indies brags about look like New York’s East River.

Almost connected with Cephalonia in the south is the Taki clan island of Zante, or Zakynthos in Greek. My earliest memories of the place are of dropping anchor in the main port and hearing Mozart played by an orchestra in the main square.

Zante had the oldest families and the most beautiful Venetian architecture of any of the isles – and the most beautiful cantatas – all now gone. The 1953 earthquake devastated the island and the modernists rebuilt it in their own hideous manner. The place now looks like an old woman whose reconstructed face is horribly scarred by plastic surgery.

My father is as guilty as the rest. In 1955, instead of rebuilding our beautiful old manor house he gave the moolah for educational purposes, brain-damaging the youth with socialist ideas ever since. I stopped the funding after his death in 1989.

Zante produced our greatest poets, Solomos and Kalvos, and one of Italy’s finest, Foscolo. Once a magical island of graceful manners and romance, it is now a tourist trap – though still with unequalled beaches.

Among the old folks there are still some wonderful manners and courtesies. But I no longer sail there, because I find it too painful. I had a glimpse in 1953 and wish to stay with those memories.

If you need to go to the Aegean, try Amorgos, a wild isle that is what Mykonos used to be, a windswept, whitewashed place with great waters and a nice, welcoming population.