Anne Robinson and Norman Scott salute the return of the Oldie literary lunches after two years! 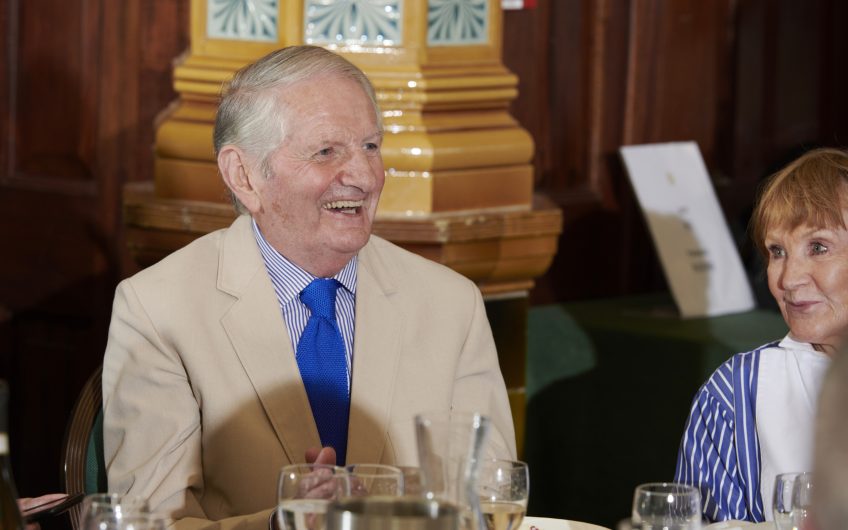 The Oldie literary lunch has returned after a two-year break enforced by the pandemic. We were at the National Liberal Club, where one of our speakers Norman Scott said he had dined several times before – with one Jeremy Thorpe. Thorpe's portrait is still at the club, said Norman, but "It's kept behind a pillar."

Our speakers were Andrew Roberts, defending the not so mad George III, and Julia Boyd on her gripping book, A Village in the Third Reich: How Ordinary Lives were Transformed by the Rise of Fascism.

Norman Scott brought along an unusual PR girl – Anne Robinson – for his talk about his book, An accidental icon : how I dodged a bullet, spoke truth to power and lived to tell the tale.

Anne Robinson has recently stepped down from Countdown – as she says, to make way for an older woman. She claims she’s stopped to see more of her grandchildren and visit her New York flat more often. In fact, the Oldie can reveal that she’s taken up a new job as Norman Scott’s full-time Rottweiler.

At the lunch, Anne recalled how she'd first met Norman Scott nearly 50 years ago: "I was a young reporter for the Sunday Times, when the Jeremy Thorpe story had just begun to bubble. It became the biggest political scandal of the 20th century."

Anne said of Norman, "He is one of my great friends. He’s the most honest person. He has a fantastic memory. He’s waited till now to write his life story.

"He is the most important equine judge in the country. He qualifies but doesn’t take part in the Horse of the Year Show every year. It might seem that, after the Thorpe case, he disappeared. In the West Country and to horse-owners, he certainly didn’t."

In his speech, Norman Scott remembered the night Thorpe tried to have him killed. "I drove off that night with Gino Newton in all innocence. He’d said he was protecting me from someone from Canada who wanted to kill me. But the lucky thing was I brought my beautiful dog Rinka. The bullet that killed her would have killed me.

"Gino Newton is still on the loose but he changed his name. I discovered that he lived in Surrey. I felt not enough had been done. The police found him and they’ve done nothing about him.

"There is another man, Denis Meighan, who wanted to kill me. They’ve both got away with it. He was the first person that Thorpe’s best man, David Holmes, got to assassinate me. But, when he came to find me, he felt out of place with his Cockney accent in a Devon pub and backed out."

On a more heartwarming front, Gyles Brandreth paid tribute to the late Barry Cryer, the MC of our literary lunches for 15 years. He told his favourite joke that Barry had given him.

"I once played Hamlet," said Gyles. "But I was no good. I was so bad that the audience started throwing eggs at me. I came on as Hamlet – and came off as omelette.

"I keep a landline at home, waiting for Love Island to call. They never do. I kept the landline for my mother, for Nicholas Parsons and for Barry Cryer, who were the only three people who called on it. Now they've all gone and there's no need for it any more."