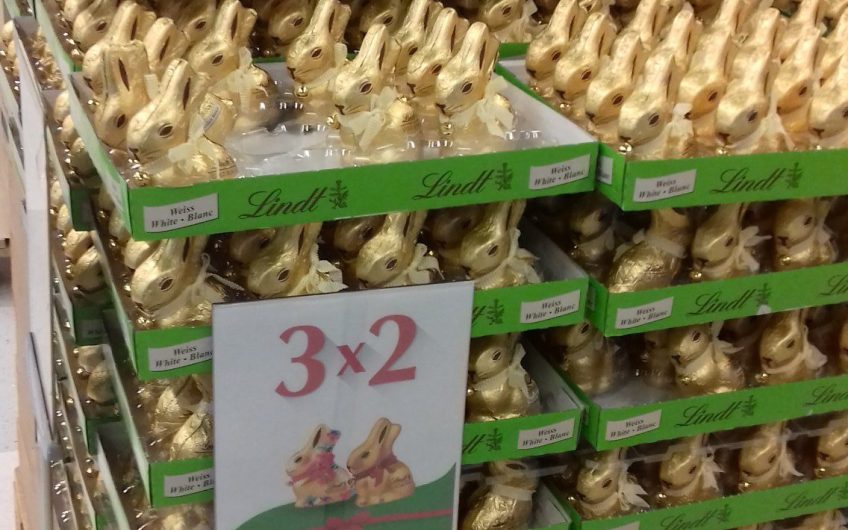 Easter traditions in Italy are similar but more different than I expected to the ones in Britain. In the run-up to Easter, churches collect foliage from olive trees for Palm Sunday. Piles of branches with silver grey leaves lie in the entrances of the local parish churches. Instead of a Palm cross, parishioners are given a twig of olive tied with a red ribbon. Our neighbour, Gianci, sweetly brought us one to bless our house.

Living in a Catholic country, we are reminded that Easter is of course, predominantly a religious festival, the most important time of year in the church calendar. Unlike in Britain where people stand in long queues to make a pilgrimage to the shrine of the paint section of B&Q. Apart from church services, all over Italy, there are vigils and parades in the streets. Local priests go around and bless all the houses. People hang yellow ribbons and flowers on their front doors. The priest never made it to our house, because we forgot to put a yellow bow on the front door. Or maybe it’s because we’re not Catholic.

Given that 93% of Italians are Catholic, I was surprised when Jehovah’s Witnesses turned up at our gate. (I did some research and found out there are 420,000 Jehovah’s Witnesses in Italy). I greeted the two men wearing ties and suits sporting lapel badges with JW.org on them. They were holding clip boards and pamphlets and I thought they were local reps from a political party because of their corporate disguise. By the time I realised who they were, they were well into their earnest lesson on my salvation, so it took a while to get rid of them. The next time they visited our house, I was prepared and said to them: ‘Sono Inglese. Non parlo Italiano.’ Which isn’t entirely untrue. They left immediately.

In the run-up to Easter, the shops display a type of panettone in the shape of a dove, la colomba di Pasqua, a soft cake with an orangey flavour and almond topping. Easter eggs dominate the supermarket shelves, mass produced, in the same oval shape. Some of them are huge, the size as a small child. Italians love bright, blingy motifs. It’s hard to buy a pair of jeans that don’t have bells, twirls or diamante decorations on them. The Easter eggs with their shimmering expansive wrappings of brightly coloured foil would probably be seen from outer space of they were placed in the middle of an open field.

I was shocked to discover that the Easter bunny doesn’t feature in Italian mythology, which means no bunny-shaped chocolates in the shops. All is not lost because we have the Lindt outlet store near Milan. Rows of Lindt gold bunnies and a ten foot one in the entrance are enough to satisfy any need for rabbit-shaped confectionary. And for complete cocoa saturation, their café serves rich hot chocolate that feels like liquid velvet gliding over your tonsils and down your gullet.

The non-appearance of the Easter bunny means no egg hunt on Easter Sunday! When our children were small, we took them to an organised egg hunt at Leeds Castle. There was much excitement as families gathered at the bottom of the hill with their small, decorated buckets. At the appointed hour, a whistle was blown and the children raced up the green slopes looking for the magical treasure of bulk-bought, small Easter eggs wrapped in gold foil. I was smiling encouragingly at my kids, when out of nowhere, a trio of middle-class matrons with blowsy hair, hand-knitted jumpers and wellingtons raced up the grassy slope. Trampling over small children as they swooped and dived, they grabbed the lion’s share of the eggs and tossed them into their voluminous wicker baskets. Several children that day were inconsolable because they had not managed to pick up a single egg, thanks to the greed of the green wellie brigade.

For our first Easter in Italy, I went searching for a leg of lamb. I scoured the supermarkets to no avail. There was lamb but not in the form of a leg – chops, cutlets, lamb steaks. Someone suggested the butcher in Stresa. He assured me he could get lamb if I paid 35 EUR up front. When I went to collect it, I was sorely disappointed at the sight of the scrawny joint. I took it as it was the only option. But I knew it would never transform onto the platter into a rich, succulent Welsh roast lamb with a sprig of rosemary on top. Not least because I could have sworn it was goat.

Spring is my favourite season on Lago Maggiore. The dawn chorus of birds is so vibrantly loud, it wakes us up. April is a symphony of four seasons colliding - the weather has the warmth of summer, but there is still an icing sugar dusting of winter snow on top of the mountain peaks. On our evening walks, we trample ankle deep in piles of copper autumnal leaves and spiky chestnut husks covering the soft earth of the forest floors. Above us, the luminous green shoots of spring appear on branches.

When we walk down to Stresa, water from melted snow streams and gurgles in gutters on either side of the road. A profusion of primroses, snowdrops, crocuses and other Alpine spring flowers grow out of banks of earth and garden walls, a panorama of unfolding floral beauty changing almost daily. We often stop to admire a villa with jasmine creepers adorning the front fence, small white star flowers nestling among dark green leaves. As we stand there, its delicate fragrance drifts towards us. My favourite are the huge magnolia trees in gardens and parks around the lake with their creamy petals silhouetted against the blue-black of the mountains like translucent pink and purple seashells.

Behind the house, lush green pastures abundant with yellow buttercups provide a perfect platform for the humming song of crickets. But the most enchanting is the cuckoo. Before we moved to Italy, I had only ever seen a cuckoo popping out a clock. In early spring around the lake we hear them morning and evening in the woods. I heard one sing across the valley that sweeps down to the lake. I stood completely still for a few seconds, transfixed by the gentle delicacy of the sound.

I love the fragrance of an Alpine spring - the herby, cut-grass aroma of rich pastures with a heady rush of honey-suckle perfume and tang of wildflowers. I am like a scent hound, taking deep breaths and sniffing the air, trying to imprint it on my memory, so that when we no longer live here, I can still smell it.