Art of dropping out - Terence Derbyshire 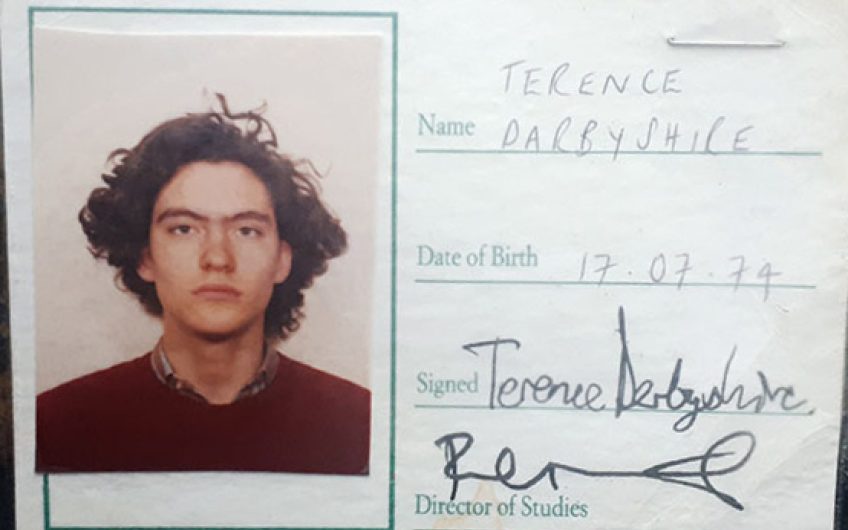 Aged 21, Terence Derbyshire walked out of the Slade Art School after his first year. Twenty-five years later, he’s proud to be a dropout

I dropped out of the Slade School of Fine Art in 1995 after just a year there. I knew I would on my first day.

It wasn’t my first time dropping out. The previous year, I’d turned down ‘normal’ subjects to study art.

My anxious parents had desperately tried to persuade me not to, spending long hours detailing the difficulties of life as an artist – money, essentially. They cared about me and thought it was a mistake. And it was. But I was adamant and, in the end, I did it just the same.

My strongest memory of that first day was signing the daily ledger by the entrance and feeling a thrilling connection to the artists who’d signed before me: Stanley Spencer, Augustus John, Paul Nash…

My favourite Slade moments seemed to revolve around that door. Every afternoon, we had our cigarette breaks on the benches just outside. Perched over the lightwell, a little raised up, we could see everyone who came and went. Students and tutors on the way in or out lingered and joined us.

We slouched, tried to blow smoke rings, picked away at Styrofoam coffee cups and surveyed the savanna of ‘normal’ University College London students on the quad.

Occasionally, one would venture over and cautiously enquire what department we were from. Haughty, unhelpful, forever striving to be enigmatic, we gave the one-syllable answer ‘Art’, and felt proud to be different.

But for me, once I was inside that door, nothing ever quite fitted. Any artistic activity felt awkward and empty.

The spark lit the previous year on my Chelsea foundation course would not reignite. I sometimes think that if the studios had been less cavernous, the walls less white, the lights less bright – if everything had been on a smaller scale, more intimate, with more crevices and corners – then I might have found my niche. Sometimes creativity can be stifled by the details.

And, sometimes, you’re just not an artist. My interests – so changeable in my twenties – had changed again. By that first day, I was already reading more and looking less. Maybe I needed the era of art collectives to be in full flow, to join a group of art activists. Maybe lots of things. Anyway, I could feel it was over before it began.

But I was too cowardly to back out. So I stayed a year.

Is there, for everyone, a certain emptiness to time at art school? After all, it doesn’t really get you anywhere. But isn’t that the whole point? If you’re trying to get somewhere, you shouldn’t be at art school.

I would guess a majority of alumni don’t become practising artists. What do they become?

I wasn’t. But I did feel at home. And happy. Just not making art.

I’d love to attend a dropouts’ reunion, to see what became of us all. The stereotype of the dropout is someone who doesn’t care enough. But I bet, just as commonly, they cared too much and knew that whatever they needed to become could not happen there.

Did they perhaps become artists, despite having dropped out? Or because of it? And, if they did not become artists at all, what did they retain from that time?

I think I pieced together a subtler sensibility – better taste – though I’m not sure quite where from. Not from the two muffled weeks in the life room. Maybe from the crits of Bruce McLean, our first-year tutor. Maybe from the time we caught him pressing the down button on the elevator, despite wanting to go up, because he wanted it to come down to him. Or from the performance-art teacher, when he told me he loved Monet.

Wherever it came from, I can still feel it and carry it like buried treasure discovered in a cul-de-sac of my career. An inner glow gained in nine short months when I brushed close to a sacred light.