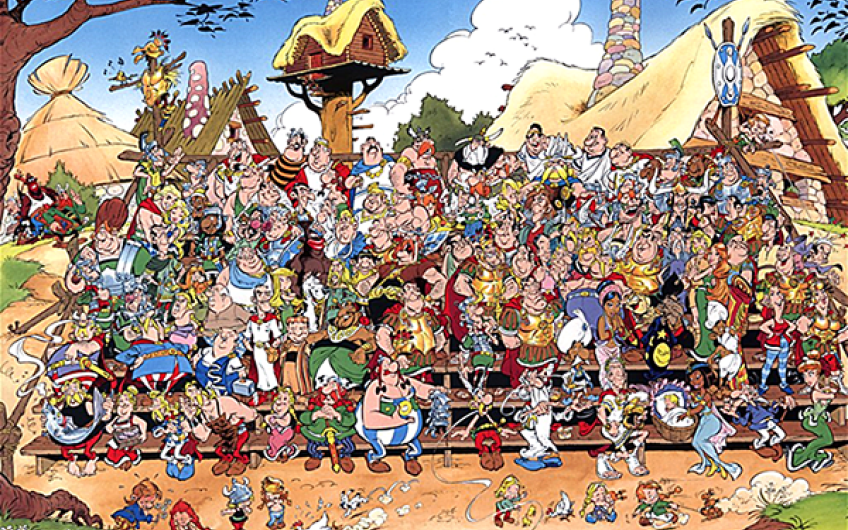 Asterix: The Secret of the Magic Potion opens today in cinemas. Harry Mount celebrates the late Anthea Bell, the gifted, very funny translator of the peerless Asterix books, and the plucky little Gaul

Even that oath, 'By Toutatis', shows how brilliant René Goscinny and Albert Uderzo - the author and artist of the Asterix books - and the translator Anthea Bell are.

All three were spot-on about the little details of the Roman Empire – in this case, religion. One of the priorities of Roman colonisation was the appropriation of the local gods that were worshipped by the tribes they conquered.

In the little unconquered Brittany village where Asterix and Obelix lived in 50 BC, the Gauls would certainly have worshipped Toutatis, the ancient god of war, fertility and wealth, before they were conquered. The conquering Romans then gradually introduced some of their own customs – gods, baths and togas, as they did in Roman Britain.

The genius of the Asterix books is that unique combination of classical scholarship and brilliantly original humour. That combination explains why the books remain gripping for children and grown-ups alike.

A recent Asterix show at the Jewish Museum in Camden, celebrating Goscinny, revealed this combination beautifully. There was a third element, too, for us British readers: the late Anthea Bell's English translations, done in collaboration with the late Derek Hockridge.

For all the genius of Goscinny and Uderzo, Bell's translations were often better than the original. In French, the village druid is called Panoramix - good but not nearly as brilliant as Getafix, which perfectly captures the druid's ability to brew up the crucial magic potion. In French, the tone-deaf bard is called Assurancetourix - a French pun on 'assurance tous risques', meaning 'comprehensive insurance'. Again, pretty good, but not nearly as apt as Cacofonix, which is so much better suited to the character.

Anthea Bell's Latin jokes, too - a tricky thing to pull off - were wonderful. Remember the pirates who get shipwrecked the whole time? After yet another wreck, one moans, 'They soaked us again! Enough to make you sick!'. The other groans, 'Sic transit gloria mundi.'

Last year marked the 60th anniversary of the first appearance of Astérix Le Gaulois, in Pilote magazine, in 1959. Goscinny died, aged only 51, in 1977. Albert Uderzo has sadly just died, aged 92.

60 years - and half a billion book sales - on, it is time to salute all three of them, and those magical opening words:

'The year is 50BC. Gaul is entirely occupied by the Romans. Well, not entirely… one small village of indomitable Gauls still holds out against the invaders.'