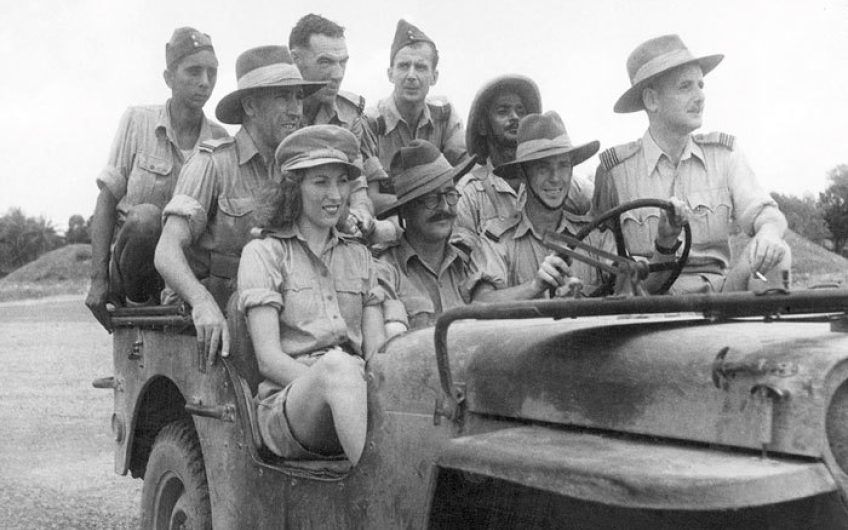 Dame Vera Lynn is to feature in a new exhibition in Ditchling, her home town since 1944. York Membery remembers talking to Dame Vera about her days entertaining the troops in Burma

At Christmas 2019, Dame Vera invited The Oldie down to her handsome detached home in Sussex to discuss her book about entertaining the ‘Forgotten’ 14th Army in Burma in 1944.

‘I’ve always loved Christmas time,’ the singer – born Vera Welch in London’s East End in March 1917 - tells me over a cup of tea, as a log fire blazes away in her living room, which looks out onto the large back garden. The room is dotted with photographs of her late musician husband Harry, who she married in 1941, and of Vera with friends, including the Queen Mother. A six-foot tall Christmas tree stands in one corner of the room, and freshly-cut holly is draped around the mirrors and paintings.

‘We’ve dug out all the old decorations that have been on the tree for donkey’s years!’ laughs Dame Vera.

The living room is inundated with a sea of Christmas cards. ‘They’re from all over the world: from Britain, Australia, the Netherlands… and even Germany, where I had a couple of hits,’ says Vera, dressed in a flowery blouse, green cardigan, beige slacks and slippers.

The war might have ended more than 70 years ago, but Dame Vera can still recall those far-off wartime Christmases as if they were yesterday.

‘Back then, people would save up their rations – fruit and so on – months in advance, to make sure they had enough to make a Christmas cake and a pudding because everything was in such scarce supply; it was so different to nowadays,’ she says. ‘Mind you, we always had a turkey, roast potatoes and parsnips, as well as a Christmas tree. I remember one year, before I was married, buying a tree with my brother and dragging it all the way home through the streets to our home in East Ham!’

Despite everyone on the Home Front doing their best to make Christmas Day as normal as possible - when the bombs were raining down and U-boats were trying to starve Britain into submission - the war was never far away.

‘Once the sun went down, we still had to draw our blackout curtains,’ continues Vera. ‘Chaps used to go around the streets on Christmas Day, just like they did on every other day [during the war], to make sure everyone had their blackout curtains pulled over. If they weren’t, they’d shout, “Put out that light!”’

Presents were more modest during the war, too.

‘We’d give each other small gifts, like a pretty scarf or hankies,’ says Vera. ‘But we didn’t expect much – so we were happy with what we received.’

I doubt you’ll find a sharper centenarian in the country – or one with a more impish sense of humour. Despite her grand age, Vera still displays an almost childlike excitement about this month’s fast-approaching festivities, which she’ll be celebrating quietly at home with Virginia, son-in-law Tom, a former RAF squadron leader, and their cheeky Jack Russell terrier Digby, a bundle of energy who spent most of my visit chasing his tail.

One Christmas highlight will be the annual festive visit by a local choir.

‘The choir is usually around eight to nine strong – they stand under the tree and sing all my favourite Christmas songs, such as Good King Wenceslas and Silent Night,’ says Vera, who quietly starts to sing, ‘Silent Night, Holy Night…’.

What a privilege to hear the Forces’ Sweetheart singing just for me. Vera still boasts a beautiful voice. When I compliment her, she says, with a twinkle in her eye, ‘I sing along [with the choir] to the best of my ability – but prefer it when they sing loudly, so they don’t hear me!’

This Christmas, she and her family will start the day with a brunch of scrambled eggs and smoked salmon at 11 o’clock – and then open their presents.

‘Until a few years ago, I used to make the Christmas cake and pudding,’ says Vera, ‘but Tom now does it.’

Virginia cooks the Christmas lunch. At 3pm, Vera and the others watch the Queen’s Speech.

‘We usually sit down to lunch, pull our crackers and put on our paper hats about 4.30,’ she says. ‘I couldn’t miss the Queen - her speech is one of the day’s highlights for me.’

However much Dame Vera enjoys the big day, Christmas is also a day of remembrance. ‘It’s a time to remember Harry [who died in 1998], and my Mum, Dad and brother [who died earlier this year, aged 102], and friends who are no longer with us – and a time to remember the wonderful Christmases we had together in the past,’ she says softly.

It’s also a time for the nation to remember all the armed forces on duty this Christmas, she says.

‘I always think of “the boys” – and, of course, the girls, nowadays – in today’s armed forces, just as I remember the troops I sang to in Burma and all that they went through all those years ago, battling dysentery and malaria, not to mention the enemy!’

Is she planning a big bash for her 103rd birthday?

‘I think I’ll celebrate my next birthday quietly after all the excitement of turning 100,’ she says, before adding, ‘But perhaps I’ll do something special for my 110th birthday!’