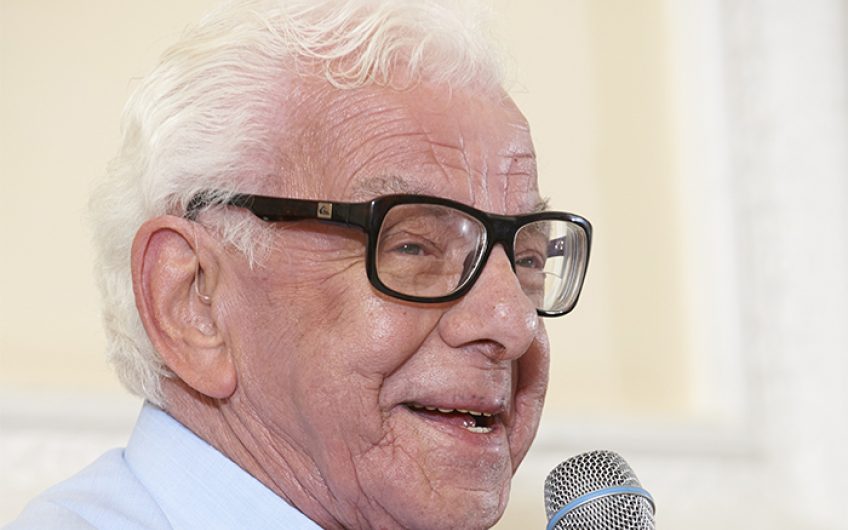 Barry Cryer was the greatest supporter of The Oldie, as a performer and contributor. His friends pay tribute

Craig Brown: Has there ever been such a funny man who was also so lovable and so generous?

Years ago, a friend of mine, who happens to be a High Court judge, pointed out that, of all the panellists on I’m Sorry I Haven’t a Clue, it was Barry who always laughed loudest and longest at other people’s jokes.

Barry loved jokes as David Attenborough loves wild animals – and, I suspect, for much the same reason. He saw in them and their variety the essence and spark of life.

He often compared jokes to perfect little dramas, and to the end of his days remained fascinated by the way in which the human mind would so happily embrace their constituent parts – a Scotsman, the Archbishop of Canterbury and a parrot all stuck in a falling lift, for instance – no matter how surreal or preposterous.

He was also intrigued by the quirk of character that made particular comedians so funny: in TV programmes about Frankie Howerd, Tommy Cooper or Ken Dodd, it was always Barry’s contribution that was the sharpest.

He was a veteran of stand-up from the days when it meant cracking jokes at the Windmill before the dancing girls appeared, yet in his eighties he was still eagerly welcoming newcomers into the world of comedy. He was the opposite of fuddy-duddy. I never heard him say a bad word about anyone – with the very definite exception of Jimmy Savile.

I was just one of the extraordinarily wide circle of friends of all ages whom Barry would ring up with a joke every week or two. ‘Have you got a moment?’ he’d say, and then he’d tell his latest joke, as if for the first time. I felt like a student philosopher in the 16th century being phoned by Montaigne. And when he’d finished, he’d give a chuckle and say, ‘And now I’ll give you back your day.’

Gyles Brandreth: Well, now we can get rid of the landline. In recent years, only two people ever used it. One was my friend Nicholas Parsons, for more than 50 years the host of Just a Minute. The other was Barry Cryer.

Baz was a regular caller – five days a week in a good week – and his calls were always a joy. They never lasted too long and they always featured a joke you hadn’t heard before.

The gift of generosity was his greatest quality. I can picture him at one of the Oldie of the Year Awards lunches, sitting next to Ken Dodd, who was about to speak and getting very nervous.

Barry set to work, reassuring Ken, suggesting lines that would work, willing him to succeed.

Barry was an enabler – and our last link with that generation who started out as comics at the Windmill’s ‘nude revues’ in Soho. He liked crafting jokes and sharing them. He didn’t set out to change the world. He simply did his best to make the world a happier place.

Roger Lewis: One of my great joys these past 20 years was a phone call most weeks from Baz, when he’d tell a new joke he’d heard about parrots or I’d ask him to tell me an old joke about parrots. He had an inexhaustible fund of stories about the great comedians he’d worked with and had written material for – Tommy Cooper, Kenny Everett, Bob Hope, even Bob Todd. He was a veritable scholar of comedy, its history and personalities. Barry was to light entertainment what Isaiah Berlin was to philosophy – the undisputed, honoured elder statesman.

Barry introduced me to the likes of Peter O’Toole, June Whitfield and Leslie Phillips. I was about 30 years Barry’s junior but he treated me, as he treated everyone, as an equal. How could you not love him?

He was of course an Oldie stalwart, the centrepiece of all the parties and receptions.

The best place to be was outside Simpson’s on the pavement, where Barry went for regular fag breaks. A group would quickly form around him and the laughter would carry to Trafalgar Square.

Comedians in real life are meant to be affected, miserable, vain creatures – not Barry.

James Pembroke, Oldie publisher: Barry was the most approachable star I have ever known. He warm-shouldered everyone, especially at Oldie literary lunches, which he hosted for the last eight years. He hated pomposity and aloofness. He clearly adored his wife, Terry, to whom he referred as ‘my first wife’ even in his last years. He was The Oldie’s greatest supporter.

Harry Mount, Oldie editor: Barry was our patron saint. In the pandemic, he told a joke a week to readers. His gags produced a million hits, a third of our traffic.

At one of our lunches, he told a supermarket joke. I asked him if he had any more. ‘I’ve got a Sainsbury’s joke, an Aldi joke and a Lidl joke. Which one would you like?’

His mind was a vast joke emporium, split into infinite categories. But how modest he was. When he rang, he’d say, “It’s only old Baz.” He rang on my birthday. He rang me on my Dad’s birthday.

He said comedy greats, like Tommy Cooper (who he wrote for), had ‘funny bones’ but he didn’t. Oh yes, you did, Baz.

Recently, Barry was MC at our Gang Shows. A week before he died, he apologised for cancelling.

At an event for Barry a few years ago, Terry Wogan said, ‘Barry Cryer – forgotten but not gone.’ Barry loved it.

How unbearable that dear Baz is now gone. The Oldie will never forget him.