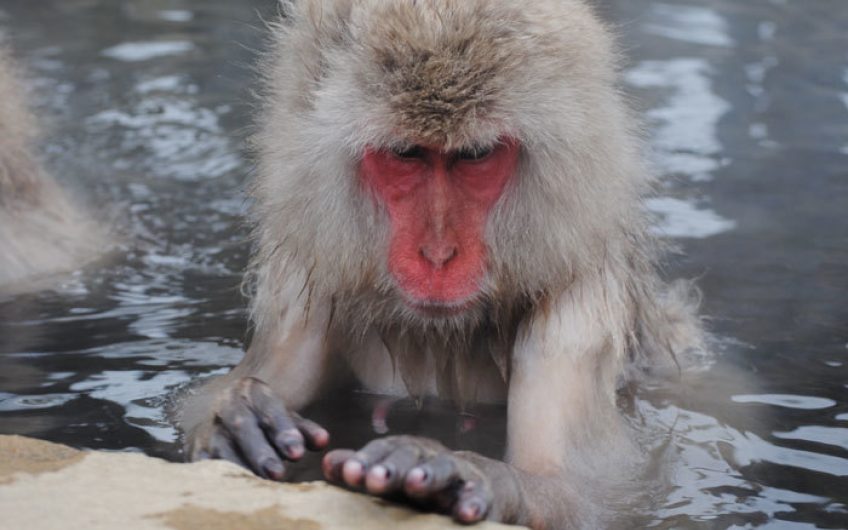 I had nine baths in an hour and a half. My fingers and toes were wrinkled and my skin boiled to the colour of fresh liver. But I was promised a cure for eczema, gout, neuralgia, ‘organic disease’ and several other complaints I didn’t know I had.

We were visiting Shibu Onsen, the onsen town eighteen miles from the city of Nagano. Onsens are hot spring baths, an integral part of Japanese culture, and a benefit – possibly the only benefit – of being a country sitting on the world’s most active fault line.

We stayed at one of the many ryokan – Japanese style inns – in the small town. The inn had its own smart onsen but the fun is to visit the nine public onsens and try out their healing powers. The town has been around for hundreds of years and at least one powerful lord used the hot springs to cure his men after long battles.

We had travelled to Shibu Onsen by Shinkansen (bullet train) to Nagano and then a local train. It was a relaxing journey which didn’t leave us feeling at all battle-weary, but we were still keen to try the waters. So we put on the yukata, a casual cotton kimono, and geta, traditional wooden clogs, provided by our ryokan.

On the way out we bought a souvenir towel from reception. These are printed with the names of the onsens and can be stamped with the special inked blocks kept on a small shelf outside each bathhouse. It is supposed to be lucky and encourage good fortune if you visit, and get stamps from, all nine.

In broken English, the hotel manager indicated to me that I had my yukata incorrectly fastened. It should be worn with the left side over the right, not as I had it – which I learned later is the usual way of dressing a corpse. The hotel lobby was no place to redress the problem so I pulled my haori (a short, thicker kimono) tighter.

My husband and I wobbled off down the path to the first bathhouse. Wearing geta is like walking on stilts. The flat pieces of wood with two bars underneath made a satisfying clatter on the paved streets but tended to tip forward abruptly. It was easy to see why Japanese women shuffle with short paces, and we were soon looking for the bathhouse that dealt with twisted ankles.

Our ryokan provided guests with a key to all the public onsens. To prevent people accidentally walking off with it, it was attached to a piece of wood the size of a floorboard. There was no hiding where we were going – but everyone we met was similarly dressed, and clutching towel and key.

The bathhouses were small and simple. They were divided into men’s and women’s sides, split with a wooden screen, which allowed for a shouted conversation between the two. There was an outer room for undressing, since you enter the bath naked. Etiquette demands you wash before getting into the water as the hot tub itself is only for relaxing.

The water was exceptionally hot with steam rising from it, hence my pink, rather scrubbed appearance after so many hot washes. One of the baths had a strong sulphurous smell and several had very cloudy water.

We clip-clopped our way round the narrow streets as the sun set and the town basked in the glow of two coloured street lamps. The sound of running water accompanied us and steam swirled from the drain grills.

It was ethereal and beautiful.

Further up the valley, half an hour on foot or ten minutes by bus or taxi, is a different onsen. This one is strictly reserved for Japanese macaques – snow monkeys. The following morning, at the Jigokudani Monkey Park, we watched the monkeys sitting in their own man-made hot spring, grooming each other, oblivious to the tourists pressing cameras into their faces.

Nearby, the rest of the troop hung about the river, picking over rocks for food, climbing the cliffs and fighting amongst themselves. A hot pipe that carried water over the river was a favourite spot for some monkeys who stretched out on it to warm themselves up after scratching for food in the snow. Another enterprising couple of macaques had settled themselves on top of the vending machine, ready to pounce on tourists’ purchases.

The monkeys appeared quite content in their onsen. Their pink faces were enhanced by the hot water – and remarkably similar to my own nine-bath skin tone.