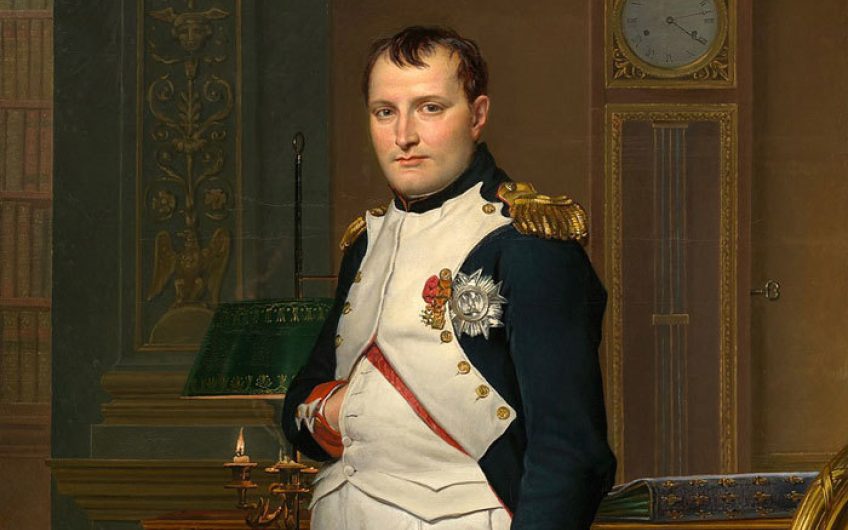 Prince Charles has said how much he likes the biography of Napoleon by Adam Zamoyski. Here, Zamoyski follows the route of the globetrotting ruler

Napoleon was the most restless of rulers, and he certainly got around; from Madrid to Moscow, Cairo to Berlin, and Syria to St Helena. He crossed the Red Sea and the Alps; he trudged across the scorching sands of the Sinai desert and the freezing wastes of Russia. His last voyage lasted three months, courtesy of the Royal Navy, and, two decades after his death, his remains were shipped thousands of miles back to France to be entombed in Paris.

He is mostly represented on horseback, but he covered some of the ground on foot, marching alongside his soldiers, some on a camel, and, pace the David painting of him in windswept red cloak on a white charger, he ascended the Alps on a mule, wrapped in grey oilskin, and descended partly on his bottom. He was, incidentally, a poor if reckless horseman.

Napoleon was a man in a hurry, never taking more than 15 minutes over lunch or dinner unless it was a formal affair, sleeping little, and rising in the middle of the night to work and dictate so fast that his secretaries could barely keep up. It was not in his nature to delegate, and he had to be on the spot. Breaking off his pursuit of Sir John Moore in Spain to deal with a crisis in Paris, he covered the 75 miles from Valladolid to Burgos on horseback in the space of five hours.

His impatience often led to accidents, some of them life-threatening. As he raced back to Paris following his victory at the Battle of Marengo in 1800, his carriage lost a wheel careering down a slope and he had to be pulled from the wreck through a shattered window. He nearly killed himself a couple of years later when he drove a four-in-hand at a gallop into the courtyard of the palace of Saint-Cloud, outside Paris, and struck a bollard, which sent him flying off the box – he claimed that he had died for an instant.

With time, his journeys became more staid, mainly in the interests of efficiency. When, having made peace on all fronts in 1802, he set off with Josephine on a progress through Normandy, they travelled in two carriages, attended by a small entourage, with one household preceding them and another following, so that when they reached a given place, it had been adapted to their needs, clothes were laid out, food was on hand, a bath was waiting, and an office was prepared, complete with the papers he was working on and a travelling library.

By the time he set off for his coronation in Milan as King of Italy a couple of years later, the system had been perfected. Marshalled by Grand Equerry Caulaincourt, carriages, horses and three sets of court officials and servants leapfrogged each other, one to prepare the accommodation, one to attend them, and a third to clear up. Napoleon himself now travelled in a Berline carriage drawn by six horses. It could be turned into a study, with a tabletop equipped with inkwells, paper and quills, drawers for storing papers and maps, shelves for books, and a lamp by which he could read at night. There was a stove to make coffee and warm up food, a mattress on which he could stretch out, and a washbasin, mirrors and soap-holders, so that he could attend to his toilette, and, naturally, a chamber pot.

On campaign, he was followed or preceded by 14 wagons and a train of mules bearing five tents, his iron camp bed and everything from spare uniforms and linen to dining silver and a supply of his favourite Chambertin wine. Closer to hand, one of his pages carried a telescope and another maps, which Napoleon would spread out on a table, or sometimes on the ground, and lie down on, pincushion in hand; he would then stand up to survey the picture and dictate orders.

He was curiously uninterested in the places he visited, unless they carried associations of one sort or another. In his youth, he sang the praises of his native Corsica and relished its sights and smells, but this formed part of an image of himself as the champion of a wronged nation. He later distanced himself from it and hated anyone referring to his Corsican origins. Having identified with France, he quickly developed a contemptuous attitude to most foreigners.

He had a low opinion of the Italians. While he was impressed by Verona, which he captured on 3rd June 1796, it was for one reason. ‘I have just seen the amphitheatre,’ he enthused. ‘These remains left by the Romans are truly worthy of that people.’ A month later, from Marmirolo, near Mantua, he wrote to Josephine of walking in the ‘silvery moonlight’ on the lake shore, but what moved him was the fact that it was the birthplace of Virgil.

Egypt was, he would later say, where he was happiest – because of its associations with Alexander the Great and because, thanks to Nelson’s victory at the Battle of the Nile which cut him off from France, he had become the pharaoh of a huge, exotic land. And it was not the exoticism that appealed – he found the women produced for him repellent and, although he did have intercourse with a 16-year-old local girl, he quickly cast her aside for the wife of a French officer from Carcassonne.

His victories took him to many European capitals, but none made much of an impression. Although he enjoyed lording it in the imperial palace of Schönbrunn, he was not kind about Vienna. Berlin fared no better. He had been outraged when Prussia made war on him. It was, as he put it, ‘like some little runt impudently raising its leg to piss over a Great Dane’. His contempt grew when its army disintegrated after Jena and Auerstadt. He likened the desk of Frederick the Great at Sanssouci to that of a French provincial notary, and, having meant to take the four-horse chariot from the triumphal arch at Charlottenburg to adorn one in Paris, he was disgusted to discover it was made of sheets of iron, describing Prussia and its monarchy as a tinsel stage set.

In Madrid, the only thing that impressed him was the royal palace, whose splendour he strove to emulate. There, too, he declined the favours of a virgin brought to him, allegedly on the grounds that she had put on too much scent (he did have a very keen sense of smell). He liked Poland for its soldiers and its women (particularly Maria Walewska, who became his mistress), but not for its muddy roads which denied him victory.

Although his heart swelled as he contemplated Moscow lying defenceless before him, its gilded onion domes glistening in the sun, his delight soon turned to disgust and he declared the whole of Russia ‘not worth the meanest little piece of France’.

Though a native of the Mediterranean, he shunned the Midi in favour of industrial centres such as Lyon, the north-west and Normandy, which he saw as the true heart of France (he hated Paris for its irreverence and its mob, whose revolutionary rage had left an indelible impression). Yet when he was awarded the island of Elba after his fall in 1814, he was surprisingly content with his ‘cabbage patch’ kingdom.

Following his final defeat at Waterloo in June 1815, Napoleon sought asylum in England; although he had been locked in conflict with the British for two decades and raged about their ‘perfidy’, he never shed a sneaking admiration for them and was shocked when his request was refused.

He was packed off to St Helena, in the South Atlantic, whose landscape and climate he found utterly depressing, and his pettifogging guardians shattered all his illusions about the British.

Adam Zamoyski’s ‘Napoleon: The Man Behind the Myth’ is published on 18th October (William Collins £30)