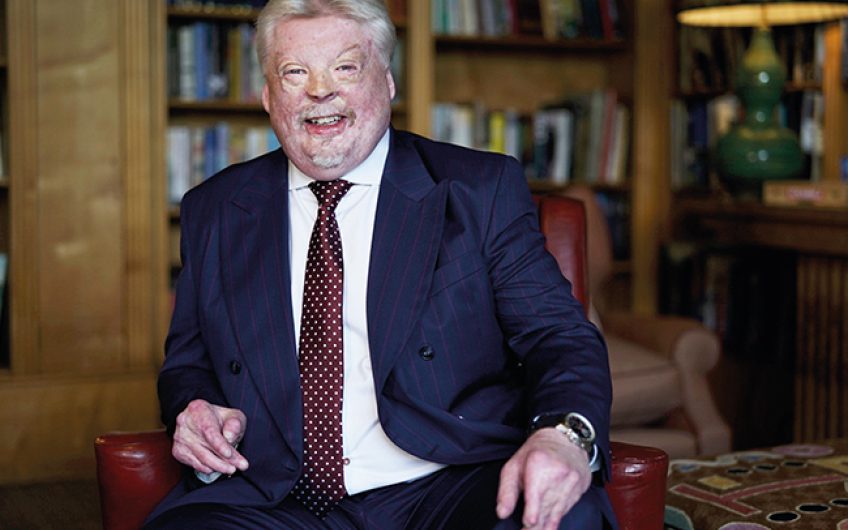 In 1982, I was a 20-year-old Welsh Guardsman and part of the Falklands Task Force.

On board the Canberra, we sailed into San Carlos Water, which was nicknamed Bomb Alley. After about a week, we did a march up to the top of a big hill, said hello to 2 Para and then marched all the way back down again.

We were put on board HMS Fearless, an amphibious assault craft. But the weather conditions were so awful that night that guys started going down with hypothermia.

So they took us back to Bomb Alley and we got onto the Sir Galahad. She was eight hours late setting sail because she’d been hit with a bomb two days before – but it didn’t detonate. They’d taken the bomb out of the side of the ship and dropped it in the sea – it’s still in San Carlos Water, I assume.

The last words I heard before we got blown up – before my life changed – were ‘It’s air-raid warning green … it’s red, it’s red! Get down, get down!’ – and that was it. I looked up, crashed across right through where my best mate was sleeping, right across into the wall where I’d left my kit, and the next thing you know – BOOM! – it had all gone kablooey.

The bomb went into the engine room and detonated the oil, which blew out over us – the burning oil – and then the bomb detonated – 500lb worth of bomb. To put that into context, Manchester city centre was blown up by the IRA in 1996 with a 500lb van bomb and the whole city centre had to be rebuilt.

People ask if it’s uncomfortable reliving the bombing. It’s part of my life now – it’s helped shape who I’ve become. I would prefer it not to have happened, of course. But I wouldn’t change the past, because I have to live in the here and now – and plan for tomorrow.

I’m a great lover of history, and history teaches us so many different things if only people would stop and read it, and look at it. You can’t change history. You may be able to rewrite it if you find out different facts. But no matter how bad it is, around slave-trading and slavery and things like that, I think, yes, we need to create a better narrative, but we shouldn’t try to eradicate the mistakes people made. We have to go forward, and we can only go forward with knowledge.

To realise I had got blown up a few days before the end of the war was a bit of a sickener but, hell, I was alive. There were 255 guys who didn’t make it home at all – 48 on the Sir Galahad. I can’t complain.

My injuries were classed as 46 per cent burns – I was told by the surgeons I was the worst-injured to come back alive from the Falklands – and over 90 per cent of my body is scarred now, because of my donor sites. I’m still having surgery today.

I may have been the dumbest man in the doghouse because, for a long time, I thought I’d be able to get out of hospital and go straight back to the Army. I didn’t want to leave. I left because I could no longer be who I was in the Army. People couldn’t tell me what to do – and if people can’t tell you what to do, they can’t control you. I have so much respect for my regiment. I never wanted to be in a position where I could take advantage.

I wanted to walk out of the forces with my head held high and people saying, ‘Well, we lost another good one today.’ I wanted the people who respected me to continue to respect me.

Before joining up, I’d been a bit of a troubled youth. I made some very poor choices. None of it was a hanging offence, but it was enough for me to recognise I needed to change the direction of my life, and my mother encouraged me. She dragged me down to the recruiting office – I love telling this story – and I had to go in and do my aptitude test. Afterwards, the sergeant came out of the room and said, ‘Well, Mrs Weston, I’m pleased to tell you that your son has passed. He is of decidedly average intelligence.’ I was perfect material for the infantry!

When the war was over, and there were official celebrations, it felt terrible. I didn’t feel angry – who would I feel angry towards? – but I felt disappointed. I was lying in a hospital; I’d just had surgery. I didn’t understand why I couldn’t be pushed in a wheelchair.

I hadn’t come to terms with the fact that I was still in a high-dependency ward. The doctors were expecting me to go into renal failure at any time. Going out might have killed me. My wounds were so open that I could have caught any number of infections. I do remember feeling very left out. But there were other battles to fight. That one wasn’t a fight worth having.

I think I’ve always had a positive attitude and believed things would get better. And now, I’m proud of being president of a charity called DEBRA. It’s a wonderful organisation that deals with people with a terrible skin condition called epidermolysis bullosa (EB), which quite simply – it’s a complicated condition – is where the skin doesn’t adhere to the body correctly. So babies are born without skin on parts of their body. They call them the butterfly children because they say the skin is as fragile as a butterfly’s wings.

I was asked to become patron about three years ago, and I agreed to do it because I felt relevant to it, having spent so long with no skin on parts of my body.

We’re fundraising; trying to get enough money to repurpose drugs we believe may hold enough properties to help people with EB. It costs £1½ million for each repurposing and for the trials and everything. A generous American lady has given us half a million pounds. We’re still searching for the other million. I’m proud to have gone on Beat the Chasers just last week – I won 40 grand! I was lucky: they gave me a question about Man United, a team I’ve supported since I was eight.

I don’t know how long I’ve got on this planet, but every day I wake up and I think I’ve won the lottery – because life is just so uncertain, and it may be a grimy old morning but at least I’m here to complain about it.

I’m looking forward to going down [to Argentina] to meet Carlos [the Argentinian pilot who bombed the Sir Galahad] again just before the 40th anniversary, and to the TV filming – and then to going back to the Falklands for the last time. I can’t imagine I will go back again. I’m looking forward to all the things I’ve got to do this year: the cruises I’m going to be speaking on and my current involvement with energy – the possibility of creating greenhouses that, yes, are commercial but hopefully will be in a position to help feed the world.

There are just so many things to do. I haven’t got close to finishing yet. At the age of 60, I feel incredibly fortunate. My wife, Lucy, looks after me better than I deserve. I’ve got a fabulous family – my three children and my grandchildren.

If there’s any disappointment, maybe it’s my daughter – she’s going out with a boy from the RAF, not the Army!