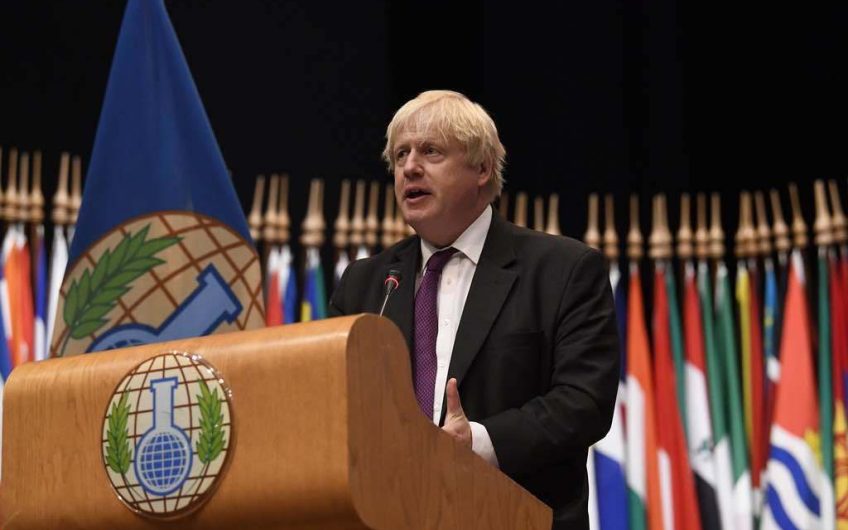 Barry Cryer pondered the title of Harry Mount’s book, The Wit and Wisdom of Boris Johnson: The No 10 edition, suggesting it might have been fun to call it The Ego has Landed.

Before getting into the gory details of Boris and his wisdom – or lack thereof – Harry Mount offered a few words of apology on behalf of Emily Maitlis, who was unable to join us due to the collapse of British democracy. In doing so, he noted that Boris may prorogue parliament, but the Oldie lunch is unstoppable.

Having worked with Boris at the Daily Telegraph for five years, Mount got to know the ‘greased albino piglet’ – a name Boris earned for his elusive nature – rather well. As a deputy comment editor, he would wait patiently every Wednesday evening for Boris’s copy, which never appeared on time. Boris’s excuses were impressive. Over the phone he would apologise profusely, ‘it’s just whizzing down the threadbare copper wires of the internet’. All the while fingers could be heard tapping away on the keyboard.

Mount compares Boris to a blond onion in the book, because, no matter how many layers you tear away, you will never quite get to the bottom of him.

But what is Boris’s greatest trick? His favourite oratorical device? When Mount asked him a few years ago, he said, without hesitation, Imbecilio. To pretend to be a fool.

Up next was Marcus Berkmann, who shared some amusing cricketing anecdotes from his new book, Berkmann’s Cricketing Miscellany.

He confessed to being a cricket nut of 40 years. Illustrating the depths of his cricketing knowledge, he described an afternoon, spent with a close friend, whilst watching a one-day international between England and Pakistan. As the Pakistani fast-bowler, Rahman Raees came up to the crease. Berkmann turns to his friend and asks, ‘What am I thinking?’ Without a hesitation he responds, Raees Mohammad. The only one of the famous Mohammad brothers to not play professional cricket.

Odd though this relentless collection of niche facts is, it is a source of much comfort and succour for, what Berkmann described as, men of a certain age who have done very well to stay out of mental institutions for all of their lives.

The book does what it says on the tin and has some fantastic anecdotes for any cricket-mad reader.

Last to speak was Peter Hitchens. His book, The Phoney Victory, shows that many of our deeply held beliefs about the Second World War are in fact lies, or, at least, half-truths.

To illustrate this, he asked the audience to cast their mind back to the KGB training-school of days gone by. It is the end of the year. The class of would-be KGB operatives are gathered in a central location in Moscow and told that they must be split off into pairs – there always needs to be two so that there is someone to denounce the other.

Once paired off, they are told that they must go out into the city and bring back a rabbit within four hours. If they do not, or they are late, there will be serious consequences.

Two by two the pairs begin to return, empty-handed, until there is but one pair left. And at the last minute, the last pair return with a wriggling bag. The instructor welcomes them, ‘Comrades, you have a rabbit?’

‘Da, comrade instructor, we have a rabbit,’

As they upturn the bag, a disconsolate pussycat falls out. And the instructor says, ‘Comrades, that is not a rabbit’.

‘Ahh, no, no, comrade instructor, you have been fooled by the capitalist conspiracy, that is what it said until we interrogated it, but now it confesses to being a rabbit.’

This seemingly out of place story, explains the essence of the book: people believe what they want to believe, even if the truth is staring them in the face.

The reason for the book, Hitchens explained, was that he is sick and tired of being told by politicians and other journalists about the need to go to war. They suffer from Munich syndrome, for them it is always September 1938, he is always Neville Chamberlain, the enemy is always Hitler and they are always Winston Churchill. And on every occasion, the war in question must be had.

On examination of the source material, Hitchens asserted that in spite of the myths that we tell ourselves the Second World War, we were not worthy of the pat on the back that we so easily give ourselves. He asserted that we never examine the reality behind the myths of the war: the unenforceable Anglo-French guarantee of the integrity of Poland, the American humiliation of Britain under the Lend Lease Act and the fact that, at the end of the war, we very much resembled a defeated nation. The overall message: time to finish off the myth.

Hats off again to Simpsons for another fantastic spread and Noble Caledonia for their ever-generous sponsorship.