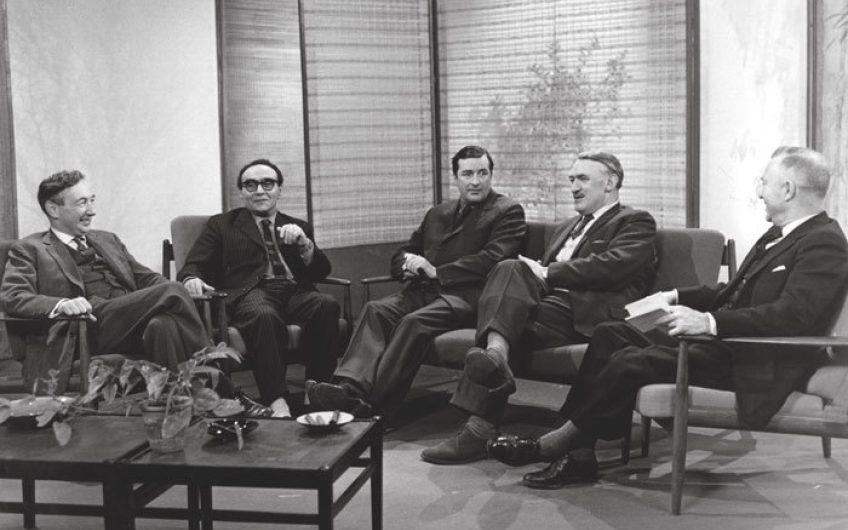 No mere B-list celebrities on the BBC sofa in those days: the massed brainpower of (from left to right) A J Ayer, Dr J Bronowski, Robert Bolt, Alan Bullock and Hubert Gregg. Conversation off the set tended to be less weighty…
View Full Size
1
of 1

In the late Fifties, I found myself chairing the television Brains Trust, and oldies abounded.

The usual weekly team included Julian Huxley and Dr Bronowski, the hyper-erudite philosopher who some found a touch long-winded; but I suppose if you knew as much as Bronowski you had a right to wind. The rest of them, four in number, were ad hoc choices: Paul Jennings, Marghanita Laski, Alan Bullock et al.

Our schedule was comfortable in the extreme. We would meet for lunch at Scott’s at the top of the Haymarket, which it isn’t any more. (As the playwright Neil Simon put it, ‘If it’s old and you like it it won’t be there in the morning.’) The lunch was cordon bleu, the wine vintage, and so, of course, was the conversation. The producer (whose name now escapes me) and I were hosts and stood by the open door to greet the Brains as they came in. In came Compton Mackenzie – or Monty, as we knew him – and we shook hands warmly. ‘Whom have we with us this week?’ he asked, adding, ‘Not that little bugger Bronowski, I hope.’ ‘How do you do?’ said a foreign voice behind him.

After lunch our schedule took us by taxi to Lime Grove, which was still a television studio, having once been a film studio. A dummy run for the camera, then to tea and make-up. I had noticed that everyone looked splendid on camera without make-up. After make-up they lost their natural sheen and became rather puddingy. I pretended to the make-up girl that it gave me dermatitis; I was the only one who looked splendid on camera before and after tea.

Huxley I came to know well. I used to drive him back home to Holland Park after the sessions. He told me of his time at New College with Spooner, and regaled me with tales of the great albino divinity. He said that Spooner didn’t make that many spoonerisms as we know them. It is certain that he announced a hymn as ‘Cinkering kongs their titles take’ and, on finding another sitting in his congregational spot, said, ‘Forgive me, sir, but you are occupewing my pie.’ But, for the most part, Julian said that Spooner was guilty of what he, Julian, called ‘paraphrasia’.

One instance of this occurred when the college was planning a visit to Spitzbergen to see the Northern Lights. Spooner reported to his wife, ‘Do you know, my dear, Huxley tells me the distance from Spitzbergen to the North Pole is no greater than that from Land’s End to John of Gaunt.’

My favourite of these tales was of Spooner preaching a lengthy sermon about Aristotle. Julian said he didn’t suppose there were more than a handful of people in the congregation who had an informed knowledge of Aristotle, but they gave him a kind of puzzled but rapt attention. Spooner perorated and came to a dramatic finish, then began his way down the spiral staircase. Halfway down he paused, then returned to the pulpit. ‘Brethren,’ he said, ‘in my sermon just now, whenever I mentioned Aristotle, I should have said St Paul.’ Satisfied that all was now well, he descended again.

Spooner spent most of his life at New College, as an undergraduate, a Fellow and finally Warden. In this last office he was required to receive Hugh Casson as a new Fellow. Casson arrived and presented himself to Spooner. ‘Ah,’ said the Warden, ‘you must come over to my house for sherry, we’re expecting Casson, a new Fellow.’ ‘But,’ said the surprised arrival, ‘I’m Casson.’ Spooner looked long and hard. ‘Never mind,’ he said. ‘Do come along anyway. I’m sure he’ll be delighted to meet you.’

Huxley, I was thrilled to discover, shared my joy at a misprint. And not only a misprint. He told me of the first time the word ‘fuck’ appeared in a newspaper. It was during the late 19th century, and the newspaper was the Times. A sacked linotype operator had his revenge, but only in the first edition.

When Queen Victoria opened a bridge towards the end of the century there appeared – in the Times again – the following report. (The second misprint is even more arresting than the first.) ‘The ceremony proceeded as though by clockwork. At two-thirty precisely, Her Majesty pissed over the bridge and received an ovation from an enormous crow on the bank.’