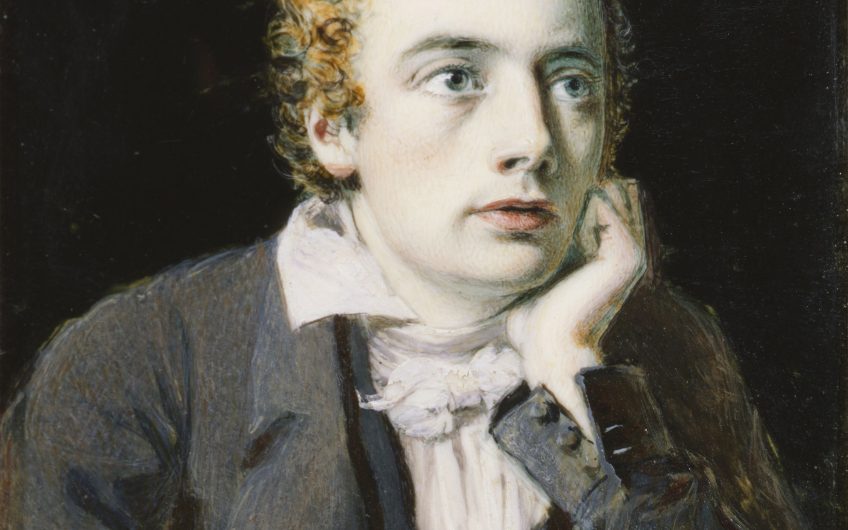 I am in Nunhead cemetery with the actor Simon Manyonda. He is reciting to me a poem, as he weaves around the gravestones after the snow, about Keats’s death. I suppose it looks something like the Non Catholic Cemetery in Rome where Keats is buried:

“Poor nightingale; the myth is richer for your pain

It is one of the best poems about Keats I have read, written by Suzi Feay, the TV & Radio critic for the FT, and commissioned to be woven into the script. Don’t forget Keats copied out his masterpiece ‘Bright Star’ into a volume of The Poetical Works of Shakespeare opposite ‘A Lovers’ Complaint, ‘ while quarantined aboard the Maria Crowther on his way to Rome.

I am making a movie (Lift Me Up, I am Dying) about Keats’s death to live stream on the anniversary of his expiry. Suzi is writing a feature about it in the FT and she knows everything there is to know about the Romantics is also one of the best contemporary poets I know. A formalist. Someone the Romantics would have wholeheartedly approved of.

Of course, I am not really there in Nunhead Cemetery, It is lockdown and I am in Ludlow in my house on Old Street where I have been living for a year with my husband Fabio Barry, since we came back from California for two weeks last March. Still within the hour I am transported to North London. Damian Lewis aka Percy Bysshe Shelley is reading a verse from Adonais from his attic in North London. ‘You sound like fire,’ I write back to him. “It is such an extraordinary process,” says Nicholas Rowe, playing Severn, who is sketching in his garden in Putney which appears to resemble, strangely, the bench by Keats’s grave. “I am in love with this project. It’s like being unravelled, for the first time. I am reading lines while taking my own direction – candlelight is the only lighting brief I have apart from the windowsill.” The candlelight has been ordained for two reasons: simply for sepulchral drama and also to unite Nicholas’s room in London and Keats’s (aka Christian Roe’s) one in Antwerp.

Let me explain. This is a project that was meant to be a live performance as part of the “Keats-Shelley 200” events commemorating Keats’s death in 1821. It was meant to be staged in 50 Albemarle Street, the home/office of Byron and Walter Scott’s publisher John Murray. But Covid-19 has tolled the death knell of Keats-200 live and in public. Ironically, three years ago we performed ‘The Year Without A Summer’ something had composed about the time Byron, Shelley, Mary and Polidori had been driven indoors by an ash cloud from a volcano in Japan. Mary Shelley penned Frankenstein and genetics and mutations entered the blood stream of high literature. However, plague be damned! Stap me vitals! I will not be swayed and I decide to convert the live performance charting the last weeks of Keats’s death into a lockdown movie to be live streamed at the hour of his death 200 years ago direct from the British School at Rome.

The extraordinary thing about the project is that these actors were available at all. It is the only benefit of Covid. They are sending me what they have filmed on their iPhone at midnight and 7pm. They are dedicated. About their time in Italy, Shelley writes, ‘This paradise of exiles,’ but in our case it’s more like Keats’s Hyperion: ‘Fanatics have their dreams, wherewith they weave a paradise for a sect.’ There is something urgent about getting this done and not letting the restrictions restrict. You can see how much the poetry loves these talents, loves their stillness, their imprisonment, the meter of them. Poetry has been waiting for a window. Here it is. And they have been bold to agree to read their parts from where their lockdown hails from: Antwerp, Putney, Tufnell Park, Peckham Rye.

The scenes are coming in by the dozen – the scenes are all late of course so they come like a stream of buses -or ambulances. “Shelley in Hades,” says the title to one - there is Damian Lewis black suited and unbuttoned in bare feet reaching out his hand to me.

O, weep for Adonais! The quick Dreams, The passion-winged Ministers of thought. The words coming through the screen like gas. ‘It would have been just as easy to die in Hampstead,’ I think as I put the kettle on. Creativity has recalibrated. We have arrived in the world of everywhere.

But I hardly matter. The actors have themselves – gone is the boom, the sound guy, the director, their co-stars, the extras, the props, even the location. They have themselves and they’re getting on rather well as lone film crews. We only have a week to go and we haven’t edited the film together yet- my husband is an object of adoration: he is helping with everything he can: this really is a case of ‘all hands on deck’ : Editor, Art Director, Fact checker, Designer...

“Intimate Remoteness,” Christian says to me down the phone. I am trying to direct him from my tiny desk in snowbound Ludlow – at least we are braving the same elements. He is right that there is something about us all being so far apart that brings us closer together. It is the language that unites us, the language of poetry. He sends me more footage – I have received 15 scenes from him in the past hour. The key poem of course is Bright Star. I have never seen an actor crack it. Its twists and turns are too obscure. It sounds nice but when you have to be the mechanic of it – let’s just say it’s not a conventional engine. “It’s gladiatorial the meter!” I say. “You have to beat the beast of the form.” I am shouting. Shouting into the high wind of their autonomy.

Did I sound deranged? How else am I going to say to an actor playing Keats in Antwerp who is meant to be in Rome to feel the complex meter of a poem finished in Naples? “Look. Keats: it’s like driving a Ferrari around hairpin bends on the Italian coast. Most cars just go off the side. You have to hold on.” He sends it again – it is much better. The halo of feeling around his head on the floorboards is sublime. I wonder how I am going to weave this into a narrative with Shelley in Tufnell Park, Severn in Putney, Keats in Antwerp on the screen of Thomas Painter our editor whose day job is at Starbucks, and now has to leave for the evening to stocktake the sugar sachets.

Lift Me Up, I am Dying by Pelé Cox will premiere on the YouTube channel of the British School at Rome, on Tuesday 23 February, 22:30 CET/21:30 GMT

The joy of birds in lockdown New York