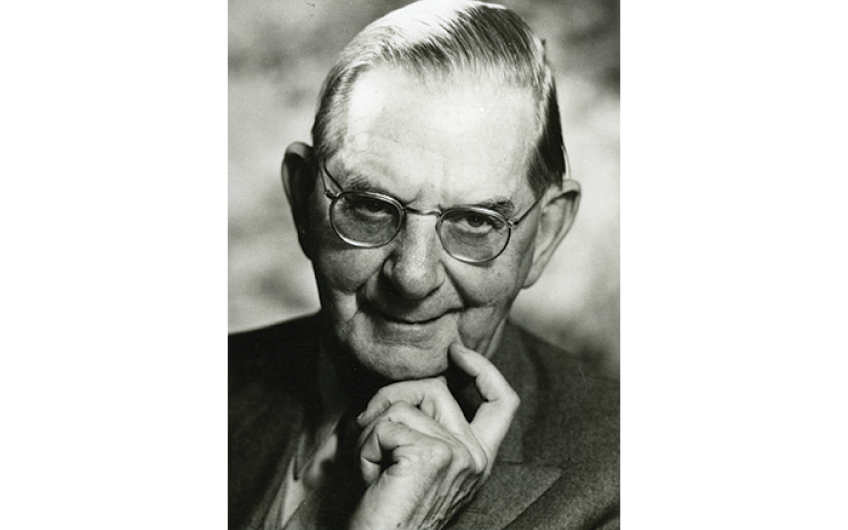 When I first spluttered up to Bickenhall Mansions from the country in a mustard-coloured Mini, Sir Neville Cardus was already waiting on the steps, wearing a light grey suit, brown suede shoes and an air of mild agitation. He had a cigarette on. His silver hair was brushed back with some kind of unguent and he smelled of Eau Sauvage. ‘I somehow fancied I’d be able to identify you at sight,’ he said.

I had written him a fan letter after seeing a series of television programmes about his early days in Manchester and his illustrious career as music critic and cricket writer for the Manchester Guardian. Four days later, I was being propelled fiercely by the elbow across three lanes of traffic to the restaurant in Baker Street where he dined every night. Cardus, well into his eighties, looked as loose and thin as a puppet and walked with little high-stepping movements as though the road was made of burning coals, but he had a grip of iron.

To this same table at the London Steak House, week after week for years, Cardus had invited singers, actresses, instrumentalists, music critics, sports commentators – and young journalists. I was in the latter category, with the evident advantage of being female. Daniel Barenboim (‘young Danny’) was a regular. The actress Wendy Hiller was advising him on what he called ‘acqua-punta’ (acupuncture) for his aches. Nicholas de Jongh of the Guardian gave him newspaper gossip. Else Mayer-Lismann talked to him about her opera school. The Garrick Club was where he took another layer of friends: conductors, editors and actors.

At the adjoining table sat a gentle long-faced habitué called John Hughes, who addressed Cardus with exaggerated respect as ‘Sir Neville’ even though they knew one another’s eating habits intimately. He looked beadily at Cardus’s new dining companion, ‘my young journalist friend from Ipswich’. Cardus pronounced ‘Ipswich’ with Bracknellian disdain. It summed up for him the outer reaches of provincialism and over the coming months he did his utmost to lever me out of it.

There were three main topics of conversation that evening. Kathleen Ferrier, the contralto he had loved and championed so warmly; the stony-heartedness of the Guardian (for not paying him enough and cutting his copy); and the painful state of his feet. ‘I have seen three “specialists”,’ he said with a theatrical pause. ‘Each has a different opinion but all are unanimous on one point – the fee.’ He demanded details of my job on the East Anglian Daily Times. I was to send cuttings of my reviews and editorials without delay. ‘Don’t ever think of your public, or of your editor,’ he warned, jabbing a bony finger into my arm.

He chopped his Dover sole into a mush and pushed it around his plate. After coffee, he always lit up, ate two Bendicks’ mint chocolates, rolled the gold paper into little balls and put them in his pocket. When he flicked out his cheque book to pay, it was covered in big-nosed cartoons of Sir Adrian Boult and Otto Klemperer. Cardus had beautiful handwriting and he loved to draw caricatures.

From the autumn of 1973, I visited his green-upholstered subterranean flat every month for more than a year and we exchanged letters most days. ‘I seem to have known you for years,’ he said. The rooms smelled of old pipe tobacco. The kitchen was foreign territory. He had an early Lowry over his mantelpiece but almost no money in the bank. On ‘visitation days’, as he called them, I would bring Gorgonzola cheese and digestive biscuits and he would supply the claret. He wanted to know what I’d been writing and whom I’d interviewed. There was no need to be impatient, he said, because at my age (26), he was still collecting burial insurance from people who could hardly afford to live, let alone save for a decent Lancashire funeral.

We listened to Kathleen singing Das Lied von der Erde or Brahms’s Alto Rhapsody, followed by other ‘consolations of age’ – Mozart’s Clarinet Concerto, Elgar’s Cello Concerto. His response to music that soothed his soul was a low, tuneless moan. Then, if the omnipresent aches in his feet were not too bad, we would walk to Regent’s Park to feed the ducks.

Cardus had published enduring books on music and cricket, as well as three exquisite memoirs, but at heart he was as vulnerable as a young reporter hoping to do well. ‘Nothing of mine has been printed in the Guardian for four weeks,’ he moaned – aged 85. ‘Somehow it all depresses me, though really I shouldn’t care less. But I am, like any true journalist, always pleased to see myself in the paper, even if distorted.’

He complained that his review of Artur Rubinstein’s autobiography, submitted six weeks earlier, still had not appeared. ‘They prefer Greenfield [Edward Greenfield, his successor as music critic] writing about The Beatles. I am amused rather than annoyed.’ He didn’t sound amused, though.

After a few months, impatient that I had not landed a job in London, he had an idea. Against his better judgement and the message from his feet, this man who had travelled not much further than Lord’s cricket ground for the last three years, and had stopped going to concerts, would come to ‘sub-provincial’ Ipswich.

I booked him into the Great White Horse Hotel, featured in The Pickwick Papers. He liked the thought that Dickens’s shade might come to him during a sleepless night. ‘Ask them if they will accept payment by cheque,’ he instructed. ‘I never like to travel carrying too many notes bulging vulgarly in my pocket book.’

Frankly, it was an anxious couple of days because he did not really seem up to the expedition, physically, but he claimed it had been ‘an experience of rare wonder’. Did he mean that his unscheduled visit to the sports department of the East Anglian Daily Times had a pleasing touch of celebrity about it? Or that the paper’s music critic, Diapason, treated him like a god? Or was he just chuffed to have done something so utterly improbable? ‘My Ipswich pilgrimage’, he called it. I can still see him in my mother’s garden, dressed in the best of his three identical double-breasted suits, demonstrating his slow off-breaks with an apple.

He struck up a friendship with Harold Evans, editor of the Sunday Times, who had published a long reflection by him about listening to music in old age. He badgered Evans to see me and in October 1974 his kindly intervention paid off: I joined the paper.

Later that year, we travelled to Manchester, where the BBC made two programmes of Neville Cardus and John Arlott in conversation. ‘Bring a needle and some grey cotton,’ he said. ‘I am certain that buttons are about to fall from my grey suit like autumn leaves.’ When the recording was over, the two men argued far into the night about the finest novel in the English language. Arlott nominated Tess of the D’Urbervilles. Cardus said it was Zuleika Dobson. He liked the humour. ‘So witty, so cleansing in this muddy world.’

His next adventure was to have been Vienna. ‘We must walk together in the Wienerwald,’ he said, possibly hoping to reprise old romances. In anticipation, he called his tailor. The tailor was to take away, and revive, some old suits and overcoats and to make a new one. ‘He took measurements for a new suit (which he said I need not pay for just yet) and said: “You have lost pounds.” In fact, I can scarcely find myself in bed when I wake in the dead of night.’

Neville died a few months later, in February 1975, still making plans and schemes; still poking fun at old age. When we sorted his clothes, the pockets of the new grey suit, and several of the old ones, were lined with small balls of gold foil.

Voyage to the bottom of the world