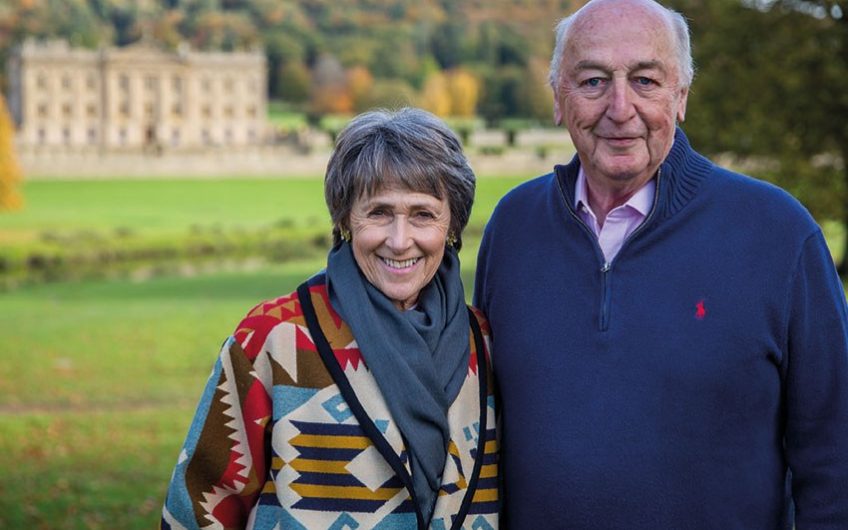 The Duke and Duchess of Devonshire have boldly inserted modern art alongside the house’s ancient treasures. By Harry Mount

The National Trust could learn a thing or two from the Duke and Duchess of Devonshire.

In recent years, the Trust has disastrously modernised by dumbing down. At Disraeli’s home, Hughenden in Buckinghamshire, they misspell his name. Next to a tree there, they’ve planted one of their endless kiddie signs, saying, ‘Please do not climb on me.’ Inside the house at Osterley, another patronising sign says, ‘It was the scullery maid’s job to empty and clean the chamber pots every morning. A very smelly job.’

At Chatsworth, there’s none of this dumbing down. The picture captions are intelligent and grown-up; the signs free of baby language. But, still, there is constant modernisation going on.

Outside the house this spring, a taste of the Black Rock Desert in Nevada is coming to Derbyshire. The annual Burning Man event is being recreated in Chatsworth’s 1,000-acre park, with 12 giant sculptures scattered across the estate. When the show closes at the end of the year, one of the sculptures will be burnt to the ground, just as it is in Nevada.

Meanwhile, inside the house, dozens of new paintings and sculptures have popped up among the Old Masters and Renaissance statues.

In a new exhibition, Living With Art We Love, the Duke and Duchess of Devonshire have placed their favourite works from acquisitions over the past 40 years, few of which have been on public display before.

The new jumps out sparklingly against the old. And the old stands forth in a different light when placed next to the new.

A luminous screenprint of a Corbusier chair by Michael Craig-Martin hovers over William Kent’s classical chairs from Chiswick House, once the Devonshires’ west London home. Picasso sketches, collected by the Duchess, sit harmoniously opposite Chatsworth’s two heart-stopping Rembrandts, Portrait of an Old Man and Man in Oriental Costume. A ceramic pot, with abstract Chinese designs by Felicity Aylieff, soars above the baroque staircase (pictured below).

The Duke of Devonshire says, ‘All the collecting generations of my family have added modern works and some have made significant changes to the architecture of the house. We are therefore following a well-trodden path in both these respects. Whether the modern additions fit in harmoniously is for each visitor to decide for themselves. We are excited to have this opportunity, temporary though it is, to add our layer of taste to that of our forebears.’

Part of the show includes a whole corridor devoted to Lucian Freud in the artist’s centenary year. All the Freud paintings, drawings and prints in the Devonshire collections are on display.

Also on show are Freud’s paints, which he left at the house on a 1959 visit, with the handwritten notice: ‘Mr Freud’s paints. Please do not remove.’

The current duke’s father, the 11th Duke of Devonshire, started collecting and commissioning works by Freud after the two men became friends in the late 1940s. Freud stayed at Chatsworth and painted six members of the 11th Duke's family, including the current duke and his father and mother, Deborah Devonshire (pictured below), over a period of 20 years.

Sadly, the picture of a cyclamen Freud painted on a bathroom wall at Chatsworth – not unlike an early Banksy – couldn’t be manhandled into the exhibition room. So a copy stands in for it in the show.

The current duke says, ‘Lucian Freud was wonderful company – very lively, irreverent and brilliant at talking to teenagers. I am still very fond of his portrait of my mother. I think it is the most beautiful thing in the house.’

Showing how the shock of the new fades with time, that 1957 portrait of Debo Devonshire, Woman in a White Shirt, horrified some family members when it was first painted. At teatime, the picture was covered up to avoid offending them. Now it has bedded in seamlessly alongside the show’s older pictures, such as a moving Giovanni Boltraffio. Damien Hirst’s golden Saint Bartholomew stares across the chapel to Poussin’s strikingly different, earlier version of his Et In Arcadia Ego in the Louvre.

Hundreds of great houses were razed to the ground in the late-19th century and the 20th century – as recorded in the celebrated 1974 V& A show The Destruction of the Country House 1875-1975. But those that survived the wrecking ball are in as good a shape as they’ve ever been.

As Evelyn Waugh wrote in his revised 1960 preface to Brideshead Revisited (1945), his threnody for the country house and its blue-blooded inhabitants had been ‘a panegyric over an empty coffin’. These days, Sebastian Flyte would be in rehab at Clouds, and Julia Flyte would fling open the doors of Brideshead Castle to the public.

And Brideshead, like Chatsworth, would be preserved for ever in a house trust. The crowds of tourists who have flocked to Chatsworth – more than 20 million since 1949 – have kept the place going. Income from visitors and an endowment fund mean the Chatsworth House Trust has spent millions on the house without calling on grants or public funds.

Between 2005 and 2018, an enormous programme of essential restoration and conservation took place at Chatsworth.

The Duke of Devonshire says, ‘It was one of the largest projects undertaken at Chatsworth since the sixth Duke built the north wing between 1820 and 1828, and was essential to secure Chatsworth for future generations of visitors to enjoy. Following the completion of this work, the house is now in a better state of repair, safer, and more accessible to visitors than possibly at any point in its history.’

When one looks at the hundreds of treasures on show, it’s hard to believe there were once even more. When the current duke’s grandfather, the 10th Duke, died in 1950, he’d handed over everything to his eldest son four years and eight months before. If he’d clung on for another four months, the gift would have avoided tax. Instead, 80 per cent of his estate was owed in death duties.

‘We had one piece of good fortune,’ wrote Andrew Devonshire, the current duke’s late father. ‘Of the three Rembrandts in the family collection, the one chosen to go to the nation, An Old Man in an Armchair (The Philosopher), proved not to be genuine. The two that remained at Chatsworth [on view to visitors today] remain authentic!’

As Evelyn Waugh also said, the country house is this nation’s greatest contribution to art and architectural history. But, for all that contribution, going back 500 years, country houses needn’t be frozen in aspic.

As at Chatsworth, their contents can be shuffled around from room to room, suffer great losses and be revived with new blood – and all without any dumbing down