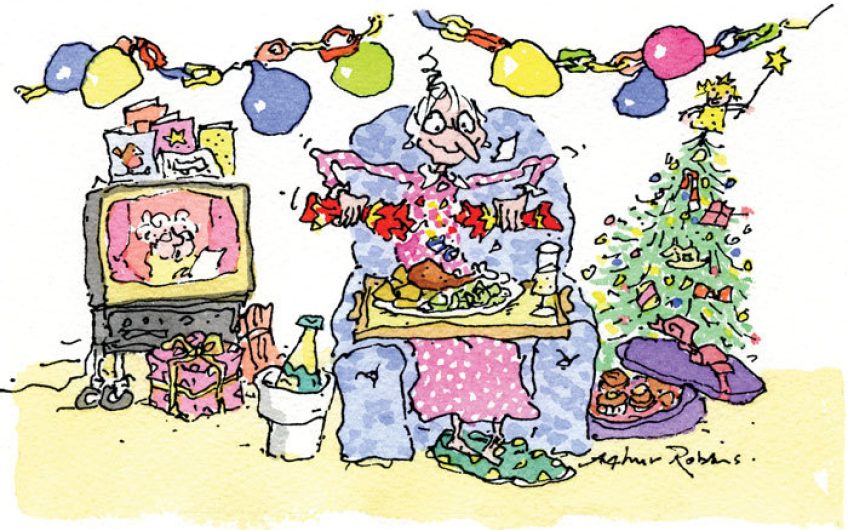 Have you met anyone over the age of ten who, at the beginning of December, starts rubbing their hands with glee and saying: ‘Oooh, goodie! Christmas is coming!’?

The older I get, at the very mention of Christmas, the more people put their heads in their hands and wail ‘Not again!’ They complain that Christmas starts earlier and earlier in the year, that it’s no longer called Christmas, it’s the ‘holiday season’, and that Father Christmas himself has been replaced by a commercial creature known as ‘Santa’. They refuse to send Christmas cards any more, they make pacts with each other not to give presents that don’t cost more than a fiver, and they complain about it lasting weeks.

How do I know all this? Because I have been a prime mover in the anti-Christmas movement. And it’s small wonder. My childhood Christmases were always spent visiting my school, hosted by the headmistress, my great-aunt Rene. I remember receiving an improving book about Norman architecture two years running. Another year it was a small volume about Italic Script. If they were lucky, my parents might have been given a tin of Assorted Biscuits. My doctor grandfather, a rather creepy old roué who had been struck off for getting his rich patients addicted to drugs, would offer me, bristling with facetious humour, a cigarette, and I, aged six or so, would have to go through the blushing ritual of refusing and hearing everyone laugh.

My sour-faced great-aunt would preside over the Christmas lunch – consisting of one small chicken between six, accompanied by over-boiled potatoes and tinned peas – with a large jug of water beside her. That was to ensure that no one became tipsy after the very small glass of sherry they’d been offered in the cold sitting room before lunch. There was never any wine or crackers.

So you see why Christmas has never been one of my high spots. But having read recently that it is possible to decide to be happy I am planning to have a happy day even if it kills me.

Yes, it’s the year that my family go off to spend the day with the ‘other’ family, so I shall be on my own. But I will not let this get me down. I will put up the decorations, despite the fact that my son has ordered me never to climb a ladder again, and that both arms are so arthritic that I cannot reach up above my head to pin up the garlands. And if that ends in tears, I shall spend Christmas in hospital, taking up essential beds needed for more deserving cases.

I will put up garish Christmas lights in front of my house, and laugh it off when the neighbours tell me they can’t sleep because of the glare.

I will send out hundreds of cards and inside I shall insert an honest newsletter – describing the retinal detachment that went so wrong, the anticipated operations for new knees and shoulders, the disastrous run at Edinburgh and the plans for euthanasia.

I will buy extremely expensive presents for all my friends and when they look appalled and say: ‘Oh, but we only got you a book’ and produce the review copy of a misery memoir they’ve been sent at the office, I will smile and say: ‘Don’t worry! It’s Christmas! A time for giving!’

I will make my own mince pies and offer them to the dustmen, the milkman, the newspaper boy, the road sweeper and the postman and I’m sure they’ll prefer them to the usual mercenary £20 tip.

I will attend midnight mass and sing carols at the top of my voice all the way home, waking the neighbours. And I will ring my friends in the United States to wish them a wonderful day, and I shan’t worry that it’ll be 3.30am their time.

And when I leave the house I will wish every stranger a Happy Christmas, even though I live next door to the second-largest mosque in west London and no one within a mile of me knows what Christmas means.

I will enjoy myself so much that next year my friends and neighbours will be just longing for me to go back to being the old grump I used to be.

Noises Off - forty years on. What a play - says Lindsay Johns