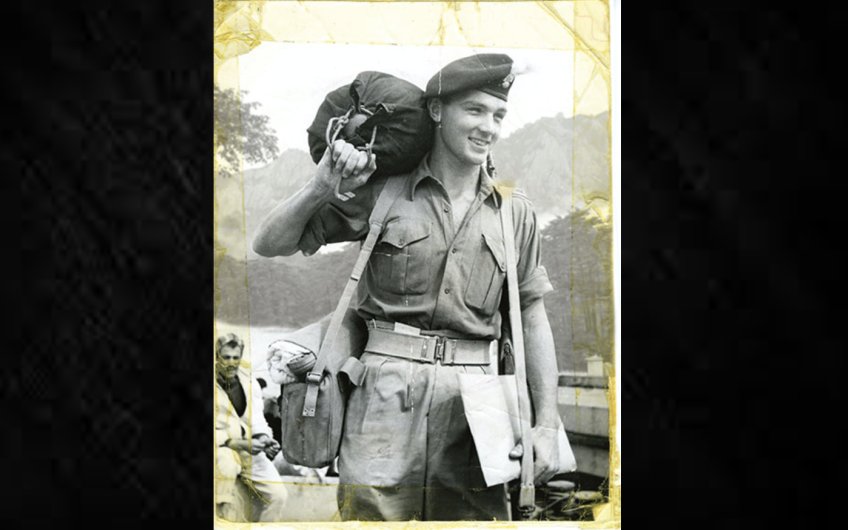 My Battalion of the Royal Regiment of Fusiliers, some 800 of us in Korea, were dug-in in trenches and bunkers blasted out of the frozen earth and rocks, some 200 metres up the slope of a small mountain known as Hill 355 (being 355 metres high). British Forces had recently recaptured this from the Chinese after some bitter fighting, and my three mates and I were in one such bunker, lined with ‘scrounged’ groundsheets and blankets. A ‘chuffer’ (a diesel-fuelled metal ammunition box with improvised chimney) glowed red hot, but there were several feet of snow outside. Other than a few tins of self-heating soup there was nothing festive about our situation.

Far below us on the valley floor a tracked vehicle was moving slowly and laboriously towards our general area. To our consternation – for this kind of activity usually brought down enemy fire upon the immediate area – it ground to a halt just below us and the fool left the engine running, emitting smoke visible for miles. Somewhat to our surprise, a soldier got out and unloaded a sack of mail, out of which he emptied three parcels. As there was no one about (no one visible to him, anyway), he went to throw them back into the vehicle, no doubt to keep them for himself later. I shouted down to him, ‘If you don’t want those, I’ll take them.’ He reacted guiltily and to my complete surprise, shouted back, ‘If your name is John Miles, you can have them, for I want to get out of here sharpish!’

To say I got down that snow-covered hillside quickly was an understatement, and the three parcels and I vanished back into our hole, where they were gleefully opened. They were parcels from three different sets of relatives back in the UK and contained alcohol, cakes, cigars and all things festive. As the cigar smoke and alcoholic songs started to issue from our frozen hole, various heads appeared at the entrance, swearing life-long friendship and offering to exchange money, leave-passes and sisters’ favours for a share of the spoils.

Our hole became much warmer as it got crowded, and eventually someone of senior rank came to break it up, for we were in danger of attracting unfriendly attention. But it was a wonderful surprise, and fun while it lasted.

Somewhat to both our surprises, during a Korean Veterans Parade on Horse Guards Parade earlier this year in the presence of the Queen and the Duke of Edinburgh, I met that ‘Senior Rank’, now unbelievably senior, and we had a good laugh at the memory. Where did that fifty years go to?

The Kings and I