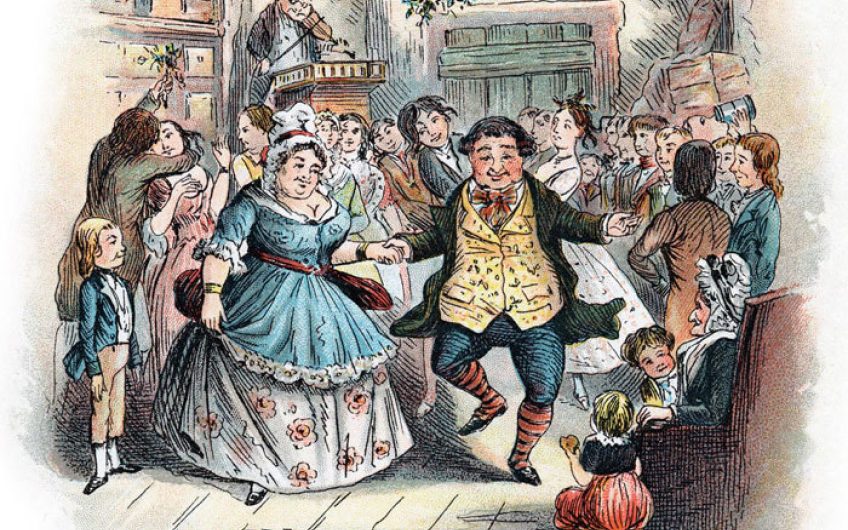 It is easy to forget that there is no Christmas Pudding in A Christmas Carol. In 1843, the year Dickens’s story swept over an adoring

readership, it was simply known as Plum Pudding and was eaten year round; Dickens’s description of the pudding singing in the copper helped anchor the dish to the day, so that the ‘speckled cannon ball’ has become a Christmas fixture. It was helped to its destiny by Eliza Acton, the Dickens-loving cookery writer, who first named the popular Plum Pudding as Christmas Pudding in Modern Cookery for Private Families, two years after A Christmas Carol.

Dickens, rarely for middle-class Victorian men, was at home in the kitchen. His characters create deft – and on the whole accurate – dishes: Mr Micawber translates underdone joint of mutton to devilled chops; Captain Cuttle conjures up egg sauce, gravy, roast fowl and sausages for Florence Dombey; and his description of Ruth Pinch’s beefsteak pudding was so accurate that Acton recreated it in Modern Cookery. Cookbooks, however, do not come out well in the novels. Dora, in David Copperfield, teaches the dog to sit on hers; Bella Wilfer shouts at The Complete British Family Housewife, which suggests throwing in a handful of something entirely unobtainable, ‘Oh you ARE a stupid old donkey! Where am I to get it, do you think?’

It must have been difficult for Catherine Dickens to carve out a culinary niche for herself but, impressively, she did so. The Charles Dickens Museum in Doughty Street, London, has just acquired and put on permanent display a rare early edition of her cookbook What Shall We Have for Dinner?, whose subtitle answers the question with admirable frankness: Satisfactorily Answered by Numerous Bills of Fare for from Two to Eighteen Persons.

This collection of menus and many ‘useful receipts’ was published under the pseudonym Lady Maria Clutterbuck. The name comes from Catherine’s role – a rather unappealing one – in a farce called All Used Up, which Dickens adopted for their Twelfth Night theatricals in 1851, at Rockingham Castle in Kent (the inspiration for Chesney Wold in Bleak House). The book was issued by Charles’s publisher, Bradbury and Evans, probably early in 1851. The museum’s 1852 edition, a small book, with elegant gold tooling on the binding, is one of very few known to survive. It was moderately successful, running to five editions up to 1860 but there was little fanfare around publication, and Charles doesn’t mention it in his correspondence. Long after, Charley Dickens, the couple’s eldest son, recalled that ‘My mother in the old Tavistock House days published, under the name of Lady Clutterbuck, a book of her own daily bills of fare, the critics with one accord agreed that the little work was well enough, but that no man could possibly survive the consumption of such frequent toasted cheese.’

It is a useful piece of social history, showing how a canny mistress of a house husbanded her resources. The first ‘bill of fare’ is a homely, economical dinner. She follows Giblet Soup with Loin of Mutton, rechauffé à la Soyer (grandly named for the celebrity chef, but simply meaning ‘reheated’), Mashed and Fried Potatoes, Beetroot Salad and Cold Mince Pies.

The amusing introduction, almost certainly written by Charles but in the voice of Lady Maria Clutterbuck,

promises that she will ‘rescue many fair friends from such domestic suffering’ as culinary cluelessness, lest their husbands stray from the matrimonial table because of a ‘surplusage of cold mutton or a redundancy of chops’.

Catherine’s menus encourage the reader to keep the fancy stuff for dinner parties. Here we see prestigious dishes such as sole, or complicated and time-consuming jellies (made by boiling up calves’ feet at home) and flavoured with Punch or Noyau (an almond-flavoured liqueur). There are no specific Christmas recipes, but Catherine puts a note as to seasonality on her menus and we can see from the ones she recommends for the winter months and from Dickens’s letters how the family would have eaten around Christmas time.

Mincemeat Tarts and Plum Pudding make several appearances. Turkey is offered roasted for large parties, drumsticks for smaller ones and Catherine’s canny housekeeping meant every bit got used. Bradbury and Evans sent them a turkey for Christmas 1839 and Dickens’s thank-you note said it was finished off only by breakfast on 1st January and had ‘furnished forty seven grills, one boil, and a cold lunch or two’ (Letter to Messrs Bradbury and Evans, 2nd January 1840).

It wasn’t uncommon for the wealthy to send each other turkey or game as Christmas gifts. Dickens thanked Angela Burdett-Coutts for the one she sent to Catherine, saying: ‘I thought it was an infant sent her by mistake, when it was brought in. It looked so like a fine baby’ (Letter 24th December 1847). The working classes would pay into ‘goose clubs’ to ensure their Christmas meat, and goose is what the impoverished Cratchit family are planning to have for their Christmas dinner, whereas the fine bird that the reformed Scrooge sent them is a turkey.

One of the unwitting effects of A Christmas Carol was to help shift the celebratory part of the season away from Twelfth Night towards Christmas Day. Traditionally the Saturnalian Twelfth Night saw the wildest parties – and the best cake. Twelfth Cake is now eaten, with everything else, on Christmas Day, and its little tokens have migrated to the Christmas Pudding: a bean for a king, a pea for the queen and a clove for the knave had been the centre of role-swapping and play-acting since Tudor times. Every year, the Dickens family were sent an enormous Twelfth Cake by Lady Burdett-Coutts, godmother to Charley Dickens, whose

birthday was on Twelfth Night. It even turned up when they were living in Genoa, in Italy, and had the chips in its icing repaired at a local pastry-cook’s, who displayed it in the window to the awe of passing customers.

Dickens loved Christmas, recollected his eldest daughter, Mamie. She recalled the ‘eagerness and delight’ with which the whole family looked forward to Christmas and described her father creating magic lanterns for the children, doing conjuring tricks dressed as a magician and making the children scream with laughter.

Catherine’s contribution to this domestic happiness has often been not only sidelined but travestied. Dickens, in

spite of his endlessly inventive imagination, caved in to that old cliché – a middle-aged crisis and an infatuation with a younger model. As part of his repudiation of Catherine he accused her of being fat, incompetent, mentally unstable and an unloving mother, and his word was taken as truth by many biographers. Her legacy is finally being reassessed and the Dickens Museum is to be congratulated for acquiring and displaying this evidence of a lively mind and a skilled housekeeper.