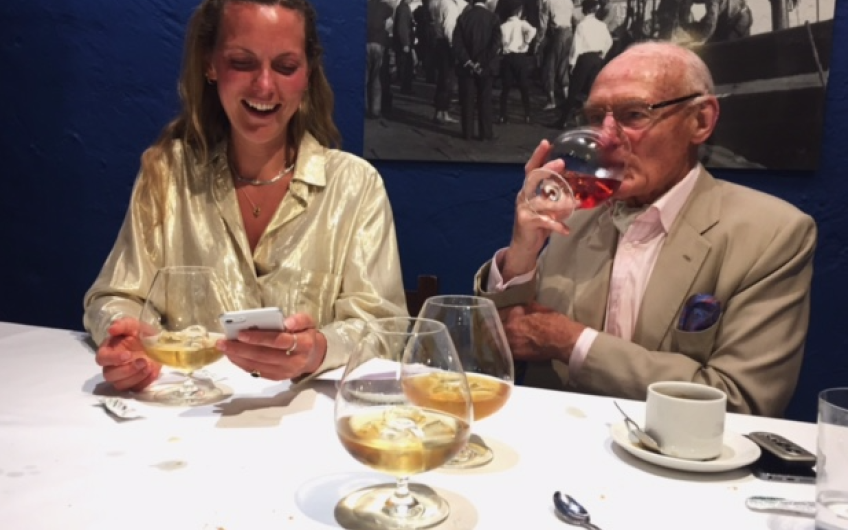 And so it seems that, even on holidays – my respectfully cordoned ‘annual leave’ – I’m drawn to oldies. Or such was the case on my recent break to San Sebastián.

I’d booked time off to travel to a small part of the Basque country; to Bilbao, then on to San Sebastián, where my fellow traveller (Charlotte) has a cousin.

The cousin, Bella, is the proprietor of a bar, Gerald’s. It’s lovely — quite different to the other spots we visited. Humbly decorated, with a rustic interior like the inside of a ship, strung with Venetian curtains, china trinkets and a record player; a spot for locals as well as tourists. San Sebastián is a European foodie haven, home to the most Michelin-starred restaurants per square metre (even ahead of its romantic neighbour, Paris).

Our trip to Donostia coincided with a visit from Bella’s Grandpa, Michael Bannister – Grandpa Banny. A great lover of ‘the playa’. Alas, his ten-day holiday had been a washout. The turbulent climate of the Bay of Biscay had proved erratic.

Bella had an evening off and proposed that we all unite for dinner. After all, Grandpa Banny is Charlotte’s cousin as well (pictured together above). It was the holiday highlight. Grandpa Banny made us feel like celebrities — ‘Take a photo, take a photo, I’m with the best looking girls in Spain.’ More sunburnt than spectacular; a compliment was never less accurate (and never more gratefully received).

All the way from Skipton in North Yorkshire, Michael told tales of ‘when the Cabinet came to tea’. The politician Iain Macleod, who served as Shadow Chancellor between 1965 and 1970, then Chancellor of the Exchequer immediately after, (he also edited the Spectator between 1963 and 1965), was a Yorkshireman. He used to invite the Cabinet up north for supper — coincidentally to Michael’s lodgings, Coniston Hall.

My gingham-patterned skirt prompted tales of former business ventures in the textiles trade.

‘I was the largest textiles manufacturer in the whole of Europe’...

When the conversation came to a natural pause, it was followed by, ‘Where are we going next?’, then howls of protest at how boring we were.

We chomped on lobster, langoustines, turbot and sole — a feast fit for Poseidon. I would need to have been rolled anywhere else.

We were not the only tourists delighted by Michael Banniser that week. Grandpa Banny regularly dined solo, propped up at the bar of Gerald’s, chatting across to his granddaughter as she concocted aperitifs. A swish American journalist clocked him from afar and decided to make his acquaintance.

Bella was later alerted to a post on the image-sharing social media site, Instagram. The journalist had shared a ‘selfie’, with an evocative caption and had ‘tagged’ Gerald’s Bar, thus alerting Bella to the digital endorsement.

‘When Paul and I went to Gerald's Bar last night, we were captivated by this elegant gentleman dining alone. He was having a wonderful time clearly, chatting to the bar owner and enjoying his meal. Paul and I pondered his story (the journalists in us both getting more creative as we drank our aperols) and we desperately wanted to talk to him. He just looked so intrinsically interesting. So, heeding my own advice to my children to make the first move, strike up the conversation, smile at a stranger, I plucked up the courage to approach him. I told him how much I appreciated his beautiful jacket and cravat and how lovely it was to see such elegance in a man. I asked if he wanted to join us for a drink. With the broadest of smiles and a kiss of my hand, this charming British man said he would be delighted. He ordered a bottle of fine champagne, sat next to me and regaled us with the most incredible stories. I won’t mention his name, but he has lived quite an extraordinary life, filled with business, travel and politics. We could have stayed all night. I’m going to write to him when I get back, to tell him what a highlight of our stay this night was. And I am so grateful I took those steps to his table to make that connection.’ 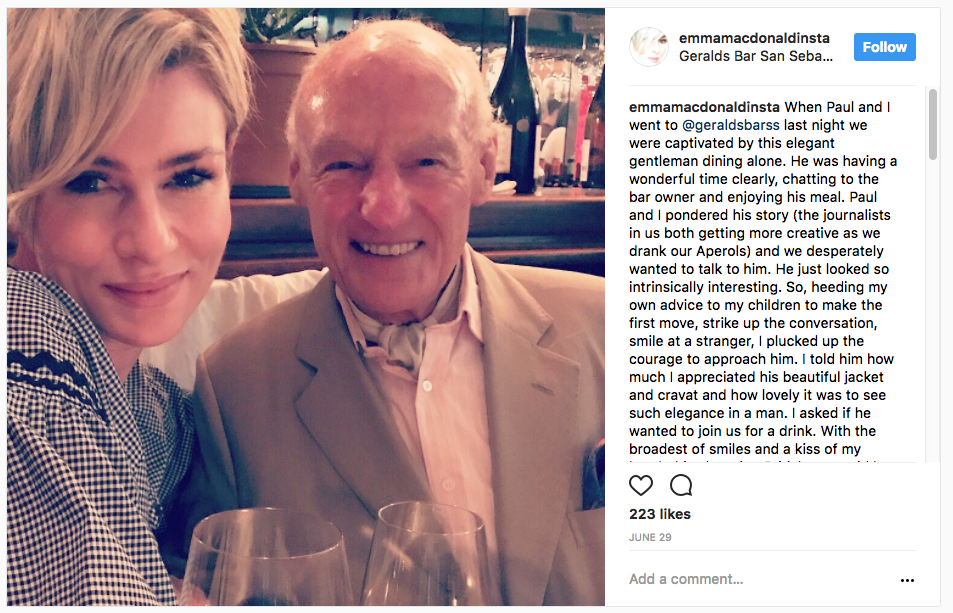 Many oldies (as discussed in Monday’s blog) don’t use computers— let alone social media — and are, therefore, blissfully ignorant of the codswallop shared in the digital realm. There's much abuse and the occasional pleasantry; but, in the main, it's a great waste of time.

I wonder if the American journalist would have shared the post, and written that caption, had she known Grandpa Banny would read it? It’s interesting to consider how older people, assumed technophobes, are referenced in social media and online, since they’re often taken to be absent. I’d imagine the post above was not designed to be seen by the subject.

There's a delightful select Oldie group: a regular contributor, a freelance contributor and a reader, who must have The Oldie headquarters on speed dial. Their voices are instantly recognisable as belonging to this elite clique. When I detect a member, I go onto autopilot, not dissimilar to Siri (‘the intelligent personal assistant’, described in the summer Oldie, Modern Life), so familiar are their requests, and the nature of the transaction.

I’ve also developed well-tuned antennae to suss out a caller's request — that’s before they’ve even disclosed the reason for their call. Subscriptions, where to find a book or the urge to submit an article — I can predict them all. Am I a psychic genius? Or is this what happens when you’re twenty-seven, work at The Oldie and the requests are on rotation from such a lovely group of readers. So, by the third word, you’re well versed in what’s to come?