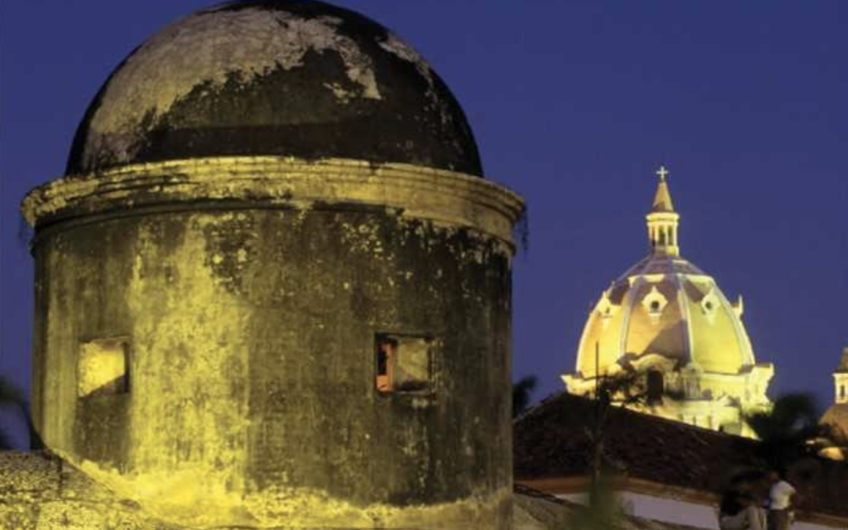 When I set out, on a cold, dark and dreary January morning, all I knew about my destination, Cartagena, on the Caribbean coast of Colombia, was that it as a very, very long way from my home in West London.

It seemed like a rather strange choice. The cocaine wars and the narco-terrorism associated with drug barons such as Pablo Escobar has meant that tourists, and most businesses, have given the country a wide berth over the last twenty-odd years. Instead of stories about Colombia’s natural beauty, complex history and delightful people, we have been treated to a diet of stories about kidnappings and shootings. But now Colombia is fighting back. Under former president, Alvaro Aribe, the drug cartels have been largely brought under control. The streets of Bogota are safe once again: even Medellin, once the home of the most ferocious of the drug cartels, is now a delight to visit.

Ah, Cartagena. Little did I know, as I clambered aboard an Iberia plane, that I was about to discover a small seaside town that would delight and enchant as no other.

I hadn’t taken much in the night before, as we drove in from the little airport, but my tired spirits had lifted as my taxi turned in through the massive grey stone walls, Las Murallas, that surround the town. They took two hundred years to build and there are only two entrances‚ my driver told me, as the car negotiated its way beneath an archway. Immediately, it felt secret, a special world within a world.

I was woken up the following morning by bright shards of sunlight casting patterns across the tiled floor of my room in the Hotel Passion, one of Cartagena’s small boutique hotels, which is located right in the centre of the town. Outside my window, a wooden balcony stretched along the entire length of the first floor, dense with bougainvillea plants, small palm trees in pots and sweet-smelling jasmine. Down on the narrow street, there was a pleasing cacophony of cheerful sounds and the houses to the left and right of me were painted every shade of the rainbow: blues and purples, yellows and pinks, reds and oranges, their tall wooden doors studded with giant iron nails. The light was astonishing, seeming to come from another age. It was bright and wonderfully warm.

One evening, I went out with a friend in search of Colombia’s prized jewels, the local, bright green emeralds, which were so highly prized by European royalty. Our expedition began at the Sofitel Santa Clara hotel, where my friend was staying.

The Santa Clara used to be a convent, and the central courtyard makes for a brilliant and unusual lobby. Over café con leche and delicious cakes and pastries one day, I watched in spellbound awe as a pair of toucans, their bills so colourful and shiny they seemed to have been made from velvet, delicately pecked up the crumbs from my plate.

My friend and I walked eastwards, through the bustling streets, alive with noise and activity: buskers and footpath booksellers, fruit juice stalls and stands selling tinto – piping hot shots of delicious, strong Colombian coffee. Kids sell cigarettes and chewing gum, and hole-in-the-wall bars spill over with salsa music. There is a curious smell in the air, which I later discover comes from the local hooch, called aquardiente, meaning firewater. People lounge in doorways and talk to each through open windows. And always, above us, clouds of purple and pink bougainvillea spill out from pots on the wooden first-floor balconies. The jewellers’ shops are all close together, in a street leading away from a small, flower-filled square where acrobats and dancers were tumbling and jiving to the amazing local steel bands. They are a treasure trove. My friend bought a pair of rough-cut emeralds and asked for them to be made into a pair of cuff links. I fell in love with a necklace and earrings made from copper and then dipped in 24-carat gold. At $100 US, they were an amazing bargain.

One morning, we set off by boat to visit a hotel down the coast. As you leave Cartagena behind, the towers and roof tops twinkling in the bright morning sunlight, you pass between two sturdy forts which guard the entrance to the bay. In the days of smugglers and pirates, a huge chain was stretched between the two forts to stop any alien vessels from reaching land. Even today, there are stories and rumours of 18th-century galleons from Veracruz and Quito, containing fabulous treasures, that still lie hidden in beds of coral in the deep waters of the bay.

Mangrove trees grow densely along the coast and, if we sailed close to them, I could see big fat, orange starfish lurking in their tangled roots. Forty-five minutes on board bought us to the Hotel Aqua, a perfect Caribbean hideaway, with just three rooms and its own jetty, from where you can swim off into the silky warm sea. We ate a huge breakfast of the best mangoes I’ve ever had, plus a wonderful Colombian dish which consists of an egg cooked inside a corn bread roll. Why bother, we all wondered, with going to the Caribbean again? Compared to Cartagena, the islands seem dull and almost bland. Historians say that Cartegena is the most perfectly preserved medieval Spanish city in the world. Purely on an architectural level, it is worth visiting just to gawk in amazement at the splendid buildings, their great, old, carved wooden doors opening onto mysterious courtyards and corridors. But it is more than just an architectural wonder: it has a heady, tremulous atmosphere, making the streets a kind of informal, open air bazaar where the gregarious Colombians seem to conduct their lives. At any second you expect to find Graham Greene, sipping a lethal mojito, in the shade of Las Murallas, or a real-life Johnny Depp, trying to figure out how to breach the seaward defences. I walked everywhere, often at night, often on my own. I never for a second felt unsafe. Colombia is certainly coming in out of the cold: it’s the best kept secret I know of.

Cartagena was founded in 1533 and quickly became the main Spanish port on the Caribbean coast and the gateway to northern South America. Before the Panama Canal was built, in the 19th century, everything that was plundered or mined or procured from the western countries of South America would be bought by ship to Colombia’s Pacific coast, ferried by mule across the strip of land which joins the two continents, and on to Cartagena, where it would be packed into ships for the journey to Europe or North America.

Colombia is named after Christopher Columbus, although he never actually set foot in the country. The first Spanish explorer was Alonso de Ojeda, one of Columbus’s companions, and when he returned from exploring the hinterland he bought with him tales of unbelievable wealth, which gave rise to the myth of El Dorado, the mysterious kingdom consisting of solid gold mountains littered with emeralds.

Escape New York - for the country