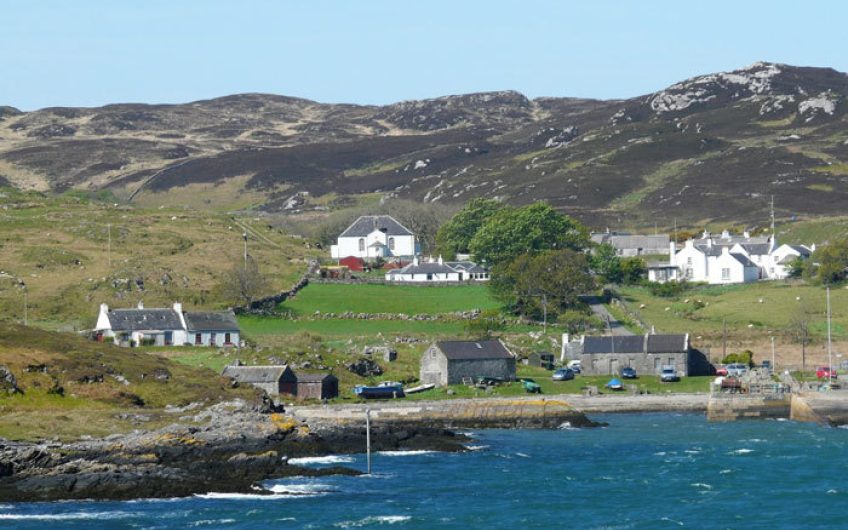 It might seem challenging for a Hebridean island with only 120 residents and over two hours by ferry from Oban to hold a successful book festival, but that is far from the case. Colonsay may be remote, but it is not in the least culturally impoverished or isolated. It already boasts a bookshop, a publishing house, an art gallery, a brewery and two separate gin distillers. Started eight years ago its festival has attracted an impressive roster of guests, including many of Scotland’s leading writers, such as Ian Rankin, Liz Lochhead, Alexander McCall Smith, AL Kennedy, Janice Galloway, Candia McWilliam, James Buchan and Val McDermid. This year the detective writer Ann Cleeves heads the line-up.

The festival takes place over a weekend and nearly doubles the island’s population. All events take place in either the village hall or the hotel. Even by the standards of most literary festivals, Colonsay’s is remarkably relaxed and convivial, more like ‘a literary lock-in’ as a previous director described it. But this annual weekend is only the most recent of the attractions of Colonsay.

When viewed on a map, the Hebrides seem a scatter of apparently undifferentiated islands of various sizes, but in fact they have remarkably individual characters created by geology and situation. Eight miles long by three miles wide, Colonsay is comparatively lush, impressively wooded in parts and with a benign micro-climate which means it is often several degrees warmer than the mainland, with low rainfall and long hours of sunshine in the summer.

Fertile and green it sustains almost 200 species of bird, including golden eagles and rare choughs and corncrakes, and 400 species of flora. There’s a population of feral goats, a thriving seal colony and otters in almost every bay. There are numerous sandy coves – including the gorgeous wide sands of Kiloran Bay, one of Scotland’s finest beaches – and beautiful lochs for fishing the native brown trout. The woodland gardens of ‘the big house’, Colonsay House, are stocked with a wonderful range of trees and shrubs, including a famous rhododendron collection. There’s an 18-hole links golf course reputedly over 200 years old. Walking, climbing, fishing, bathing, golfing, birdwatching, bikes for hire: Colonsay naturally lends itself to traditional outdoorsy family holidays – children can be safely left to their own devices. There’s only one road round the island and traffic is – to say the least – infrequent.

For competitive visitors, mention must be made of the island’s equivalent of the mainland’s Munro-bagging: McPhie-bagging. A Munro is any Scottish mountain over 3,000 feet, a McPhie is defined as any eminence in excess of 300 feet. There are 22 on the official list. The aim is to climb all of them and it can be done in a single day. The distance is around 20 miles and the current remarkable record is just under four hours.

One visitor to Colonsay last century was inspired to make a film about it, the wonderfully romantic I Know Where I am Going (1945) with Wendy Hiller and Roger Livesey. Its director, Michael Powell, was already a passionate aficionado of islands: he had made The Edge of the World in 1938 about the forbiddingly isolated Foula in Shetland. But Colonsay was something else. In 1944 it took him four days to get there from Glasgow:

‘The island had no jetty, and sent a boat out to meet the steamer. There was a comfortable little hotel, and we soon scrambled to a high point of the island, which was only 300 feet above sea level. From here the whole glorious panorama from Iona to Kintyre lay before us, and I shouted out that this wonderful land and seascape could be the only setting for our story. If I could only get a film unit up here, and somehow feed and lodge them, I knew that we would bring back a wonderful film. It wasn’t just the scenery, it was the feel of the place.’

I Know Where I’m Going eventually had to be shot on Mull for practical reasons, but it is filled with references to the island and its remoteness, and the difficulty in getting there provides much of the plot. But Colonsay remains as wonderful today as it was for Powell.